The Real Problem with Erdogan

Last night saw a coup attempt in Turkey. Seeking to overthrow the government of President Recip Erdogan, a military faction positioned tanks around the Istanbul airport, closed bridges, buzzed Ankara in airplanes, and attempted to take over TV stations. It was quickly quashed. As of now, nearly 3,000 soldiers are under arrest following fighting that killed some 200 people. Prime Minister Yildirim says the situation is “completely under control.” President Erdogan promises that the insurgents “will pay a heavy price.” 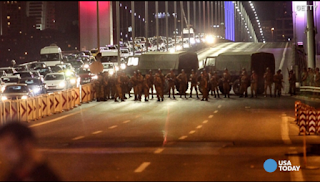 Not a lot is known yet about the insurgents. Conventional wisdom has it that their cause is one of secularism against Islamism. An analysis by the BBC's Middle East Editor, Jeremy Bowen, is typical. In a sidebar titled "Why did coup happen?," Mr. Bowen writes that Erdogan “is a political Islamist who has rejected modern Turkey's secular heritage.” It’s a heritage that Turkey—and the Turkish military—take extremely seriously, dating back to the 1920s and Kemal Ataturk, the founder of the Turkish Republic.

It’s true that Erdogan has Islamist roots. He came up through the ranks in the Welfare Party, which was banned by Turkey’s Constitutional Court in 1998 for its opposition to the nation’s secular charter. The following year, Erdogan was jailed for reciting an Islamist poem.

In spite of his early history, Erdogan has not been that much of an Islamist since he's been in power. The controversies that have characterized his eleven years as prime minister and two years as president have little to do with religion.

No, the real problem with Erdogan is not Islamism, but rather, in the words of Mr. Bowen, “Mr. Erdogan has become increasingly authoritarian and is trying to turn himself into a strong executive president.”

Examples abound of attacks on freedom of the press and separation of powers:

I would be remiss if I didn't address some counter-examples, so here goes: Erdogan's Justice and Development Party (known by its Turkish initials AKP) has twice been dragged in front of the Constitutional Court in attempts to shut it down for infringing on the separation of mosque and state. But both attempts failed. It's also been alleged that Erdogan provided support to Islamic State; that charge hasn't stuck either. In fact, one of his accusers, US Vice President Joe Biden, ended up having to apologize. If any support did occur, it was probably more about opposing Assad than supporting Islamism. And although there have been restrictions placed on the sale and advertising of alcohol, they aren't that different from what exists in the United States.

All-in-all, Erdogan more closely resembles a strongman in the mold of Vladimir Putin than an Islamist like Muhammad Morsi. Some of my anti-Islamist friends will no doubt say that he’s playing his cards close to his chest, and he plans to implement a theocracy just as soon as he has consolidated enough power to get away with it. They might be right. But Erdogan’s not really a close-to-his-chest type. He’s more a shoot-from-the-hip, Donald Trump type, with a history of outrageous statements comparing Israelis to Nazis or telling female journalists, “know your place.”

In any case, regardless of whether there's a master plan for theocracy, I hope, for the sake of the Turkish people, that Mr. Erdogan never becomes powerful enough to implement one. Unfortunately, the failure of last night's coup will make the continuing concentration of power in Mr. Erdogan's hands that much harder to prevent.

Michael Isenberg writes about the Muslim world, medieval and modern. For his take on the roots of Islamism, see his talk The Islamic in Islamic State on YouTube.

Posted by Michael Isenberg at 12:01 PM No comments:

They don't hate us for our freedom

Destiny Disrupted: A History of the World through Islamic Eyes by Tamim Ansary
Book Review by Michael Isenberg

I wasn't sure what I was getting into when I opened the cover of Destiny Disrupted: A History of the World through Islamic Eyes. I was concerned it might be one of those rants, so common on the Left side of the political aisle, about how, from the Crusades to the invasion of Iraq, all the problems of the Middle East were the West’s fault. So I was pleasantly surprised to find something else instead. 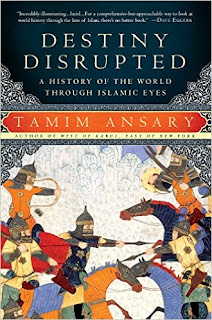 In Destiny Disrupted, author Tamim Ansary provides the view through Islamic eyes in two senses. The first is geographical. In contrast to most histories of the “world,” which revolve around events in Europe, Destiny Disrupted revolves around events between the Indus and Nile rivers, a region which to Muslims was the world. He doesn’t say much about events in Europe prior to the eleventh century, when contact between Europe and the Muslim world became more common.

The second sense in which the book peers through Muslim eyes is narrative. If there were a narrative to Western Civilization, it would be something like the story of how freedom and science overcame tyranny and superstition. In contrast, to Muslims, “the underlying force of world history was the quest to perfect and universalize the Muslim community.” The key words here are universalize and community. Muslims believe that it is their destiny to be the world’s one, universal religion. The term jihad, for example, should be interpreted through this lens. It really was, through most of Muslim history, literal warfare against non-Muslims, to push out the borders of the House of Islam. The notion that it is some internal struggle to be a better person came later. And since Islam is a community, threats to its unity must be eradicated. Islamists don’t seek to separate the sexes in order to oppress women. Their concern is that sexual decadence will “disrupt social harmony.”

Obviously some caveats are in order here. Mr. Ansary can identify some recurring themes in mainstream Muslim thinking, but he cannot possibly speak for all Muslims. Still, it is easy to see that the early years of Islam, during which Muslims won battle after battle, can be understood in terms of this narrative. The subsequent destruction of large parts of the Muslim world by the Mongols, followed by centuries of falling behind the West technologically and militarily are more problematic for Muslim thinkers: hence, Muslim destiny is “disrupted.”

Understanding the competing narratives is crucial to understanding the motivation of jihadists, which in turn is essential to defeating them. In the wake of the September 11 attacks, it was common in the West to hear, “They hate us for our freedom.” Ansary argues that this fails to grasp the issue, because it fails to grasp the competing narrative. “One side charges, ‘You are decadent,’” he write. “The other side retorts, ‘We are free.’ These are not opposing contentions; they’re non-sequiturs.”

In describing conflicts between Muslim and non-Muslim peoples, Ansary is fair—mostly. He points out, quite rightly, that the Crusades had little impact on the Muslim world beyond Palestine and Syria. As for more modern conflagrations, the coverage of the Arab-Israeli wars is remarkably even-handed; the coverage of the Lebanese civil war and the fall of Mossadegh not so much. While Ansary is justifiably proud of the accomplishments of Muslim civilization, he does not sugarcoat or hold back when he feels criticism is warranted. For example, many have called the 11th century scholar Abu Hamid Ghazali, who wrote a devastating attack on science, the greatest Muslim after Muhammad. But Ansary doesn’t hesitate to say that he thinks Ghazali was wrong. His “argument against causality undermines the whole scientific enterprise.” Nor does Ansary have sympathy for those Islamists whose solution to Islam’s disrupted destiny is a return to the seventh century. “A trap,” he calls it.

The style of the book is breezy, with many informal phrases and anachronistic metaphors. For example, he tells us that Abbas, the brutal founder of the Abbasid dynasty, "went by a new title, al-Saffah, which means 'the slaughterer.' Apparently he took some pride in what he had done." The great Nizamiyyah university in Baghdad is described as "the Yale of the medieval Islamic world." You may find this approach jarring, or you may find it readable and enlightening, depending on your taste.

The one criticism I had was that the footnotes are a bit sketchy. This makes it impossible to further investigate discoveries that I had not encountered elsewhere in my reading about Islamic history.

There are many such discoveries in Destiny Disrupted to interest someone who already has a good grounding in Islam. Nevertheless, the book is an excellent starting point for anyone who wants to learn the basics, and at the same time, gain some insight into the way Muslims view the history of the world.

Michael Isenberg writes about the Muslim world, medieval and modern. For his own take on the themes of Muslim history, see his talk The Islamic in Islamic State on YouTube.

Posted by Michael Isenberg at 9:19 AM No comments: