by Michael Isenberg. The news from the Middle East this week was dominated by the war in Syria. 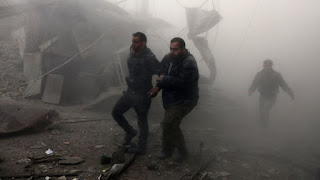 Fighting raged in the Eastern Ghouta region, in the suburbs of Damascus. The BBC reported over 200 civilians were killed. The Assad regime has kept rebel-occupied Eastern Ghouta under siege, cut off from the outside world, since 2013. Four hundred thousand people are trapped there, starving, freezing, and desperate for medical supplies. Now, with many troops freed up by successes in Aleppo and other parts of the country, the government is attempting to retake the region. In a characteristically impotent gesture, the United States and the United Nations have, according to the BBC, “called for an immediate cessation of hostilities.” Such demands are ultimately fruitless, since Assad has no motive to cut off hostilities while he’s winning, unless it's to provide himself with a temporary tactical advantage.

Meanwhile, monitors on the ground accuse the Syrian government of conducting six chemical weapon attacks with chlorine gas during the past month. @SyriaCivilDef reported that one of these attacks, in Saraqeb (northwest part of the country), injured nine, including three of their volunteers, called “White Hats.” The BBC reported that in response to the allegations, which the Syrian government denies, Israeli warplanes struck a Scientific Studies and Research Centre site near Damascus. The site is believed to be used for the manufacture of chemical weapons, in violation of the Russian-brokered agreement that Syria concluded with the Obama Administration after a 2013 chemical attack. In my humble opinion, the Syrian government is stupid to engage in these attacks. Crossing that line is one of the few things guaranteed to bring a military response from either the United States or Israel.

But not the only thing.

On Wednesday night, US forces launched artillery and airborne attacks against forces allied with the Syrian government near the Euphrates River, killing 100. The US said the attack was in retaliation for a raid by government forces against the headquarters of the Syrian Democratic Forces (SDF)—the coalition of Arabs and Kurds that has been in the forefront of the fight against ISIS. I’m glad to see the US standing by the SDF—we owe them. It is a pleasant change from our weak response to Turkish attacks against the Kurds in the north of the country last week.

On Saturday an Iranian drone infiltrated Israeli airspace from Syria. An Israeli helicopter shot it down. The Israeli Air Force then retaliated against Syrian military targets. One Israeli jet was hit by antiaircraft fire but was able to crash in Israel. The pilots ejected safely. According to the BBC, Israel then “launched a second wave of strikes” and “inflicted huge damage on Syrian air defences.”

Original footage showing #Iranian UAV infiltrating and then shot down over Israel, and #IDF strike on Iranian command vehicle in #Syria pic.twitter.com/Sz6poAOdjc

Michael Isenberg writes about the Muslim world, medieval and modern. His forthcoming novel, The Thread of Reason, is a murder mystery that takes place in Baghdad in the year 1092 and will be the first in a series that depicts how the Muslim world committed cultural suicide during the Middle Ages.

Posted by Michael Isenberg at 1:47 PM No comments: