Did the Islamic Golden Age in Spain really happen? A Debate

The Ornament of the World: How Muslims, Jews, and Christians Created a Culture of Tolerance in Medieval Spain by María Rose Menocal.
Book Review by Michael Isenberg.

In the spring of 711 AD, the Muslim general Tariq ibn Zayid led some 7,000 fierce Berber fighters in an invasion across the straits that would later bear his name (Gibraltar = Jebel al-Tariq = Mountain of Tariq). Their landing in Spain and subsequent rout of the Visigoth King inaugurated 700 years of Muslim rule over parts of the Spanish peninsula, in particular the area in the south which the Muslims called al-Andalus and is now known as Andalucía.

When I was growing up, my Sunday School teachers told us what a wonderful place al-Andalus was (Yes, we had Sunday School at the synagogue). The Muslim rulers, we were taught, were the epitome of rationality and tolerance. It was a “Golden Age” when Jews and Christians were able to practice their religions freely, achieve great things in poetry, philosophy, and commerce, and rise to dizzying heights in a Muslim-dominated society. Indeed, the time is remembered so fondly among Jews, we still build our synagogues to look like mosques.

It was only as an adult that I learned that not all historians think things were so rosy. There is a debate among scholars as to whether this Beacon of Tolerance ever really existed. Some argue that Muslim Spain was more like South Africa under Apartheid, with Jews and Christians relegated to second class status, or Iran under the ayatollahs, with government by clergy.

Recently I read two books on opposing sides of the question of whether the Golden Age ever happened. The late María Rose Menocal, of Yale University argued "Yes" in her book The Ornament of the World: How Muslims, Jews, and Christians Created a Culture of Tolerance in Medieval Spain. Darío Fernández-Morera of Northwestern replied with an unequivocal “No” in The Myth of the Andalusian Paradise: Muslims, Christians, and Jews under Islamic Rule in Medieval Spain. In this post I'll review the Menocal book. I’ll cover Fernández-Morera in a future post.

Menocal was primarily a professor of literature so it’s no surprise that The Ornament of the World presents the chronicles of al-Andalus as a series of stories. “Rather than retell the history of the Middle Ages,” she explains, “or even that of medieval Spain, I have strung together a series of miniature portraits that range widely in time and place, and that are focused on cultural rather than political events.” This approach makes for a very readable book, but not without some sacrifice of scholarship. There aren't even proper end notes—mostly just sources on the quotes and their translations. Much of the book reads more like literary criticism than history. For example, she tells us that it “is about a genuine, foundational European cultural moment that qualifies as ‘first-rate,’ in the sense of F. Scott Fitzgerald’s wonderful formula…namely, that ‘the test of a first-rate intelligence is the ability to hold two opposed ideas in the mind at the same time.’” In the case of Muslim Spain, the two opposed ideas were the Islam First ideology that existed in theory in the shari’a and the tolerance that Menocal claims existed in practice.

Muslim Spain was, Menocal writes, “the chapter of Europe’s culture when Jews, Christians, and Muslims lived side by side and, despite their intractable differences and enduring hostilities, nourished a complex culture of tolerance.” 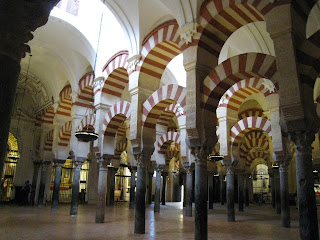 She took her title, The Ornament of the World from the writings of Hroswitha of Gandersheim, a German, Christian lady-scholar of the 900s. Hroswitha used the phrase to describe the City of Cordoba, capital of Muslim Spain. As Menocal portrays it, Cordoba was a city of spectacular edifices—tourists can still see the famous red and white horseshoe arches of the Grand Mosque (now called the “Mosque-Cathedral”). There were seventy libraries in town whose holdings ran into the hundreds of thousands—at a time when the largest library in Christendom “probably held no more than 400” books. Madinat az-Zahra, the palace of the caliph, was every bit the rival of the Dar Calipha in Baghdad (palace of a rival caliph), with a gold and silver-roofed reception hall, a pool of liquid mercury, and an animal park. Its library was so vast that just the catalog was forty-four volumes.

Menocal’s stories are chronological, starting with the departure of the young Abd ar-Rahman I from Damascus in the mid-700s as he set out to make himself Master of Spain. The tales run through the publication of Don Quixote in the early 1600s—Cervantes claimed in a (fictitious) preface that his masterpiece was a translation of an ancient Arabic history that he rescued from a pile of old manuscripts about to be made into rags. Along the way we meet:

Menocal concedes that Muslim Spain was not all palaces and poetry. “It would be foolish,” she writes, “to suggest that this was a world devoid of all manner of intolerance and darkness. What age, no matter how golden, is?” She mentions, for example, Joseph ibn Nagrillah, son of Samuel the Nagid, who laid out the gardens of the al-Hambra, still a spectacular Granada tourist attraction, before being killed in an anti-Jewish pogrom. She also touches on the Martyrs of Cordoba, the forty-eight Christians executed between 851 and 859 for publicly asserting the divinity of Christ and denouncing the wickedness of Muhammad. Menocal dismisses the episode on the grounds that they knew what they were doing and chose martyrdom voluntarily. Talk about blaming the victims.

IMHO, Menocal was too willing to gloss over the dark and intolerant side of Muslim Spain. More about that in Part II.

Michael Isenberg writes about the Muslim world, medieval and modern. His forthcoming novel, The Thread of Reason, is a murder mystery that takes place in Baghdad in the year 1092. It depicts the war for the Muslim soul between those who seek to enforce shari’a strictly, persecute Jews and Christians, and stamp out "un-Islamic" science, and those who wink at a few sins, tolerate their non-Muslim neighbors, and write books about science instead of burning them.

Posted by Michael Isenberg at 10:38 AM

Email ThisBlogThis!Share to TwitterShare to FacebookShare to Pinterest
Labels: Darío Fernández-Morera, Islam in the Middle Ages, María Rose Menocal, Spain, The Myth of the Andalusian Paradise, The Ornament of the World