Who is Tommy Robinson? 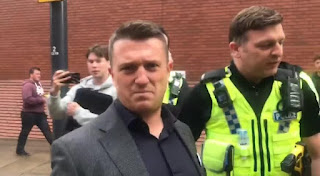 “A lie can travel halfway around the world before the truth can get its boots on.” – Mark Twain (attributed)

Ten days ago, some guy named Tommy Robinson got arrested outside a courthouse in England. “He deserved it!” our left-of-center friends exclaimed, having suddenly become champions of law and order. “Islamaphobe! Racist! Fascist!” From the way they carried on, I imagined this Robinson chap was something like a cross between Paddy Tanninger from Family Guy…

Robinson certainly looks the part of a British Neo-Nazi. With his flattened nose, lily-white skin, and military haircut (despite never having served in any military), he seems straight out of central casting.

But one can't judge by looks, and so I did my own research. While the lies zipped around the world, I listened to Mr. Robinson’s Oxford Union Speech, read his autobiography Enemy of the State, and searched the web for any corroborating materials I could find, all in an effort to come to grips with who is Tommy Robinson. And now that he has been nearly forgotten in his jail cell, and the public has turned its attention to Roseanne Barr’s Twitter feed and the Philadelphia Eagles White House disinvitation, I finally have my boots on, and am ready to share what I found:

Tommy Robinson was born Stephen Yaxley in Luton, Bedfordshire (1982). Other names he’s been known by over the years are Stephen Lennon and Paul Harris. His opponents have made much ado about these multiple aliases, implying there’s something sinister in it, but they mainly stem from his attempts to keep his identity a secret in order to protect his wife and children during his early years as an activist. His real identity was eventually revealed by Paul Ray, who Robinson calls “a 100 per cent, bona fide, right wing fruitcake.” Ray, together with a character called “Nazi Nick” demanded that Robinson turn over to them control of the organization he founded, the English Defense League (EDL). When Robinson refused, Ray posted a video online revealing his real identity, as well as accusing Robinson of kidnapping Ray’s mother.

Robinson’s hometown of Luton is a mixed race community, with large black and south Asian populations. Robinson wrote in Enemy of the State that as a young child he “wasn’t really aware of race or religion being any kind of issue. Sure, their colour identified people, but it never registered as being a barrier to anything. Not at first, at least…Things changed quickly though, and the problems started once we got into high school.” The turning point was a schoolyard fight between his friend Dean and a Pakistani student names Majid. “Boys had playground scraps and all that,” he wrote. “Except this was different. All the Muslim lads rushed Dean, younger ones, older ones—Dean was in year nine with me and even boys from year 11 attacked him, which never happened. They jumped him down on the school service road and they put him in the hospital. There were about 20 of them.”

On another occasion, while walking with five or six friends to a swimming pool, “we came across a group of around 15 to 20 Pakistanis just hanging out…They mugged us, spitting in our faces, calling us white boys, white pigs, knocking us about and then searching us, taking our money.”

After graduation, Robinson won an internship at Britannia Airways to learn aircraft engineering—one of six positions for which there were 600 applicants. However, his future in engineering ended abruptly when he was sentenced to twelve months in prison for beating up an off-duty policeman who had attempted to intervene in an argument Robinson was having with his then-girlfriend, now wife. “I was no angel,” he freely acknowledges. After his release he made his living taking odd jobs in construction and opening a tanning salon. His free time was for soccer. “My social life pretty much revolved round being out with the lads on Friday nights, then the big day out on Saturday and all that involved—from boozing and chanting all the way to a good old ruck with the opposition as often as not. A football hooligan? I suppose so.” At 5'6", he admits his penchant for getting into fights "may or may not be a bit of the 'little man' syndrome."

In the meantime, he was watching his hometown go to hell.

The victims of Muslim violence—the innocent people murdered by jihadists, the young girls turned into sex slaves by the grooming gangs—are, for most of us, merely statistics that we read about on the Internet. For Tommy Robinson, living in Luton where everyone seems to know everyone else, they are living, breathing human beings. One of his cousins “was stabbed in a confrontation with some Muslim blokes in the town centre” and almost lost a hand. Mark Sharp, who, in an infamous case was brutally murdered by a gang of Muslims, was the friend of someone Tommy knew. Sharp had gotten into some sort of traffic incident and “flipped a vee-sign at them…It was a something and nothing moment in a car. It happens in every town, every day. But these characters still had to call more of their mates and murder a bloke in cold blood.” To add insult to injury, “the judge felt he had to find a way to let them off easy, by inviting a jury to find an excuse for their behaviour.” Robinson’s cousin Jeanette, meanwhile, was groomed—the despicable practice of prepping girls as young as eleven years old for service as sex slaves, often by getting them addicted to drugs so they become dependent on their captors: “She started going out with a Pakistani bloke and the next thing we knew she was strung out on heroin, addicted. She woke up one occasion in a house being gang-raped by half a dozen Muslim men…the police just remarked that she was a drug addict and basically shrugged their shoulders. Everyone did all they could to help her, but it was useless. They’d lock her in the house and she’d climb out of a window to go back to the Muslims and get her fix.”

And yet, it was not these crimes which drew Mr. Robinson into activism. Rather it was the spectacle of a Muslim mob disrespecting British soldiers. On March 10, 2009, the 2nd Battalion of the Royal Anglian Regiment marched through Luton, an honor to celebrate their homecoming from Afghanistan. A standoff developed between patriotic Lutonians who had come out to cheer on the troops and a Muslim group. The Muslims “had placards calling our troops ‘Butchers of Basra’ and saying ‘Anglian soldiers go to hell’. And the police had simply guided them to a vantage position where they could hurl insults, while guarding them from people who were understandably pissed off by it all.”

An outraged Robinson decided to do something about it. He had been organizing the soccer outings for years, so it seemed natural to turn his organizational skills toward forming the United Peoples of Luton (UPL; later, when it went national, it was rechristened the EDL). UPL planned a march to Luton’s war memorial for two minutes of silence in early May. About 300 people showed up, but the police stopped them from reaching the memorial. “They kettled everyone in the square and wouldn’t allow anyone to move, in or out. They kept people there for three hours. Women—including my auntie—pleaded to be allowed to go to the toilet but the police wouldn’t let them. Men had to stand guard and screen their wives while they crouched and pissed in the street. It was a total disgrace.”

But Mr. Robinson is nothing if not persistent. “There was always going to have to be another march because things simply couldn’t end like that. We planned the second one for the next Bank Holiday at the end of May. I rang the police myself…I told the police in no uncertain terms that unless they let us get to the memorial, the whole town was going to go up. People were raging.

“Do you know what their answer was?...They went round swooping on the houses of the lads they’d identified from the first UPL demo, arresting them…They came after me, went to my mum’s, but luckily I wasn’t in at the time. I ended up effectively going into hiding, to make sure they couldn’t hit me with one of their restraining orders.”

But the people of Luton gathered anyway. “On the day of the second UPL demo, something happened I couldn’t have imagined. Rival factions and gangs, lads who hate each other, all came together under this one banner. Blokes I’ve had major dramas with put their rivalries, put everything aside…today we were all Luton, we were all England.” Once again the police tried to box in the demonstrators. But, “it was a completely different atmosphere from the first march, because this was just men and there was a sense that the police weren’t stopping us today.

“There were probably 500 lads and we assembled at the far end of Park Street. From there however, things went differently, because instead of meeting the police head on, everyone charged the other way—went round the town centre and came in from the far side of Luton. It turned basically into a sprint to get to the war memorial. Once we got there, we stood and held our two minute silence for our soldiers. We’d won our little personal battle.”

Alas, much as in the seventeenth century, when the likes of Edward Coke, John Selden, and Oliver Cromwell faced off against the Stuart kings to protest the Stuarts’ trampling of British liberty, the Crown did not take defiance lying down. The government’s attempt to arrest Tommy Robinson before the second march was merely the first chapter in its shameful vendetta against a man who just wanted to honor the troops. How the Empire struck back will be the subject of a later installment of this series. But first, Part II: Is Tommy Robinson a fascist?

Posted by Michael Isenberg at 4:32 PM