A Juice that Frees thy Heart from a Hundred Pains

Did Muslims drink wine in the Middle Ages?
by Michael Isenberg.

Readers of my novel The Thread of Reason, set in the world of medieval Islam, often tell me how surprised they are to find widespread wine drinking in the book. “Isn’t wine prohibited in Islam?” they ask me.

It certainly is. The Quran bans it in numerous places, for example Chapter 5, Verse 90: “O ye who believe! verily, wine, and [games of chance], and statues, and divining arrows are only an abomination of Satan's work; avoid them then that haply ye may prosper [1].”

The Hadith, the collected sayings of Muhammad and his Companions, which together with the Quran form the basis of Muslim law, is even more strict. It tells us that the penalty for drinking was set by Muhammad and his successor, the caliph Abu Bakr, to forty lashes. But Abu Bakr’s successor, the caliph Omar, raised it to eighty [2]. And it wasn’t merely drinking that was forbidden: also buying it, selling it, transporting it, serving it, and sitting at a table where it is served [3].

Despite these prohibitions, wine was widely enjoyed in the Muslim world during the Middle Ages. We know this from numerous sources. In this post, I’ll share what some of the literature of the time had to say. The poems and stories handed down to us through the centuries may be fictional, but they reflect the attitudes of the writers, and in my opinion they're far better sources for details about daily life than a formal history, which, in the words of Jean Henri Fabre, "records the names of royal bastards, but cannot tell us the origin of wheat." So I'll cover the literature here and, in the next installment, get into more traditional types of historical evidence.

Wine was a favorite topic of poets, especially those in the Sufi tradition such as Rumi and Hafiz. Omar Khayyam, the astronomer and author of The Rubaiyat (and the hero of The Thread of Reason), was obsessed with wine. The oldest collection of his poems we have is the Ouseley Manuscript in the Bodleian Library at Oxford, transcribed in 1460. Out of the 158 verses that appear there, 90 of them, by my count, or 57%, are about wine, including the one from which I took the title of this post:

There is some debate as to whether the wine that is so highly praised in Muslim poetry is supposed to be taken literally, or whether it is a symbol for something more spiritual—wisdom, or mystic communion with Allah, for example. The debate is especially controversial in Omar Khayyam’s case; I’ll discuss that in detail in a future post.

While the symbolism of poetry can be hard to interpret, there is no room for interpretation concerning the wine that pours so freely in the prose stories of the time. It symbolizes wine. For instance, liberal imbibing appears in the Maqamat, by Qasim Hariri of Basra. Hariri will be familiar to readers of The Thread of Reason as the spy sent to “take care of” Omar Khayyam during his travels. One story in the Maqamat, for example, concerns a party of travelers who wish to journey from Damascus to Anah, in western Iraq. They are reluctant to set out, however, because they do not have a guard to travel with them and protect them from bandits as they cross the Syrian desert. The problem is solved when a holy man presents himself and promises to keep them safe by means of magic incantations. This unlikely expedient works like, well, like magic, and the party arrives in Anah without incident. They pay the holy man generously, and he scampers off, leaving them wondering where he went:

The "holy man" was in fact a con man. And there’s no doubt from the context wine means wine. Certainly the thirteenth century artist who drew this illustration of the scene for an illuminated manuscript thought so. The guy in the lower right stomping the grapes clinches it. 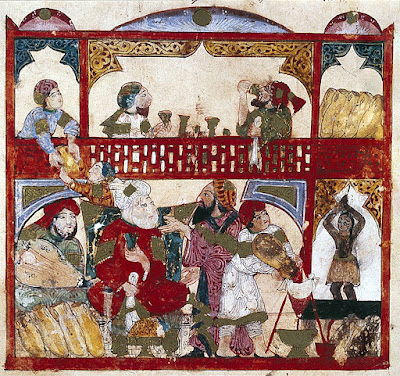 The characters in the Maqamat were practically teetotalers compared to those in the most famous collection of stories from the medieval Muslim world, The Thousand and One Nights. I ran a search on the Richard Burton translation and found 783 instances of the word wine (okay, that includes the footnotes, but I think I made my point). While the narrator of the The Maqamat considered the consumption of alcohol to be “foulness,” the drinking parties in the Nights are presented very matter-of-factly, as if they were a perfectly normal part of life. You’d be surprised at who would show up:

Harun al-Rashid is considered by many to be the greatest caliph of all time. And although he didn’t drink on this occasion—he excused himself on the grounds of “vows of pilgrimage”—he sure didn’t mind that everyone around him partook, especially considering that he was the leader of the Muslim world, responsible for the enforcement of shari’ah. As for Ja’afar, he’s presented as somewhat more strict, attempting to keep himself and the caliph away from a place where wine was being served. But the Thousand and One Nights is a work of fiction. Harun al-Rashid and Ja’afar ibn Barmak’s real-life carousing was considerably more wild. I’ll tell you about that in the next installment.