Islam prohibits forced conversions. Except when it doesn't.
by Michael Isenberg.

No claim about Islam is more likely to start an argument than the one that Muslims spread their religion by telling conquered peoples, “Convert or die.” It’s right up there with “Jihad is Holy War.”

As with most such debates, the truth is complicated.

Strictly speaking, forced conversion to Islam violates Muslim law, the Shari’ah. In the words of the Quran, “There is no compulsion in religion (2:256).”

Rather than force unbelievers to apostatize, scripture tells Muslims,

In other words, Islam does not tell unbelievers, “Convert or die.” It tells them, “Convert, live under our rule as second class citizens, or die.” While technically that is not forced conversion, I submit it’s not any better. 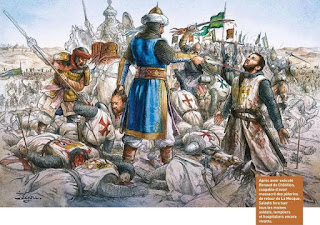 In any case, just because a thing is prohibited by law doesn’t mean it never happens. Forced conversions were rare in Islamic history. But they did occur.

Sometimes they were at the hands of a rogue leader and eventually cooler heads prevailed. That was the case in 1198 when the ruler of Yemen, al-Malik al-Mu’izz Isma’il, declared himself the caliph—leader of all the Muslims—and ordered forced conversions of Jews and Christians. Those who refused were beheaded. Three years later, al-Malik was murdered by his own troops and the converts went back to their old religions.

But in other cases, conversion was at the hands of rulers who to this day are among the most cherished and revered figures in Islam. Saladin (who incidentally was the uncle of al-Malik) is known in the West for his chivalry toward Richard the Lion-Hearted. But he wasn’t so chivalrous after the ass-whooping he inflicted on Crusader forces in the Battle of Hattin (1187). The Templars and Hospitallers taken prisoner were ordered to convert. Many refused. Saladin’s secretary Imad ad-Din, who was there, wrote what happened next:

Two hundred knights were massacred. Observe that the “devout men” and “scholars,” who were the authorities responsible for enforcing the Shari’ah in general and the laws against forced conversions in particular, enthusiastically participated.

My last example is from the year 1148, during the conquest of Morocco by the Almohads, a fanatical sect that rebelled against their rulers, the Almoravids. They thought the Almoravids were soft on the enforcement of Shari’ah. We have an unusually detailed and personal account, thanks to a letter found in the cache of documents known as the Cairo Geniza. As refugees streamed from Morocco into Egypt, one Jewish merchant, Solomon b. Abu Zikri Judah, recounted to his father the news they brought from the town of Sijilmasa, which was where their family was from:

The translator, S.D. Goitein, comments that the last two numbers are probably exaggerated. A horrific series of events nevertheless.

As for ‘Abd al-Mu’min and the Almohads, they went on to complete their overthrow of the Almoravids and extend their bigoted, Islamist rule over much of Spain and half of North Africa. Their dynasty would last over a hundred years, and destroy the vibrant culture that once flourished in Muslim Spain. Take notice.

Posted by Michael Isenberg at 6:26 AM