But he IS racist, right?

Well, it’s complicated.
Part III of a series: Who is Tommy Robinson?
by Michael Isenberg. 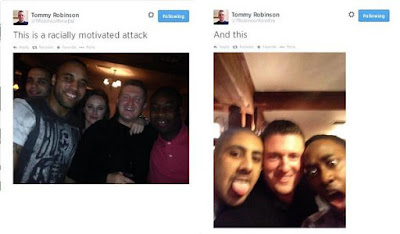 Any mention of jailed anti-jihadi activist Tommy Robinson inevitably elicits two words from our left-of-center friends: fascist and racist (Come to think of it, mention of peanut butter and jelly elicits at least one of those words from our left-of-center friends). In my previous installment in this series, I addressed the first one. I concluded, “The idea that Tommy Robinson is a fascist is ludicrous….The snowflakes who shoot off their mouths about punching Nazis can only dream about the sort of genuine anti-fascist cred that Tommy Robinson has built over the course of his career.”

Frankly I did fascist first because it’s the easier of the two. As for whether he’s a racist—well, it’s complicated. There are things in his life which would seem to exonerate him completely from any charges of harboring racial animosities. But there are other things which are frankly disturbing. I’ve been round and round about this, but I don’t have some magic equation that I can plug all the variables into and have the answer pop out “racist” or “not racist.” So what I’m going to do is lay out all the facts and leave the drawing of conclusions as an exercise for the reader. After all, facts are my thing. It’s what I do. Well, facts and bourbon.

To complicate matters even more, it’s fair to ask whether it's even possible to be racist against Muslims. Islam, after all, is not a race — it’s an ideology. On the other hand, the practitioners of Islam are disproportionately non-white, especially in Tommy Robinson’s neck of the woods, where they’re predominantly Pakistani. So it’s hard to separate the two.

Certainly there is no evidence that Tommy Robinson is racist toward anyone other than Muslims. He has many friends who are black. I realize I’m on treacherous ground here. During the Civil Rights era, and maybe still today, it was said that a dead giveaway that someone is a racist is that he’ll say, “Some of my best friends are black.” But like I said, I’m just going to lay out all the facts and let you be the judges.

In Part II I recounted one episode from Mr. Robinson’s autobiography in which he brought his black friends to a white supremacist meeting. There are many similar episodes. Not that Mr. Robinson got any recognition for that from the press. Regarding the reporter who conducted his first interview with the national media, a piece in The Guardian, Mr. Robinson writes, “And he basically, again, called me, called us, racists. He completely did not mention the fact that I’d turned up with three black men who were clearly my close friends.”

We don’t just have to take Mr. Robinson's word for this; other people have met his friends and witnessed his relationships with them. For instance, Israellycool’s Brian John Thomas, who hosted Mr. Robinson during his 2016 visit to Israel, told me, “He brought two friends including a guy he's known since school (black guy).”

And speaking of his trip to Israel, Tommy Robinson has been a consistent friend to the Jews and the Jewish state. He has taken up the cause of Jews who have been victims of Muslim violence in the United Kingdom. This is encouraging. Throughout history, tolerance toward Jews has been a sound litmus test of an ideology. Concerning European Jews, during his wrap-up with Mr. Thomas, at the end of his Israel trip, he said,

Mr. Robinson understands the connection between persecution of Jews in Europe and the need for a Jewish state:

And when it comes to the deep emotional connection the Jewish people have to their homeland, he just gets it:

And lest you think he was merely pandering to his Jewish host, here’s what he said to the crowds of working class English soccer fans who attended his English Defense League (EDL) rallies. From the September 29, 2012 demo in Walsall:

Nor does Mr. Robinson seem to harbor any prejudice against the Sikhs. Here he is at a May 2013 demonstration at Downing Street. A Sikh group happened to be holding a demo of their own nearby, and Mr. Robinson heaped praise on them and the sacrifices made by their co-religionists during World War I—and the EDL rank and file cheered them on.

And here he is engaging the Sikhs and shaking their hands after the same protest.

Indeed Mr. Robinson brought the same tolerant attitude that he’s had toward minorities in his personal life to the EDL—and demanded the same from the rank and file. From his autobiography:

He addressed the subject again at another rally. This one was in Newcastle after soldier Lee Rigby was brutally murdered by jihadis in cold blood on a London street (2013). Mr. Robinson said, "Everyone’s welcome in the English Defense League. All colors and races."

Mr. Robinson insists that his quarrel with Islam is ideological, not racial. At the same Newcastle rally he said,

He repeats the point in his autobiography: “I do not apologise for having a problem with an alien ideology.” I wholeheartedly agree.

And yet, despite his insistence that his disagreements with Muslims are purely ideological, he sent out this racist series of tweets making fun of a physical characteristic shared by many Middle Eastern people, which he attributes to incest: 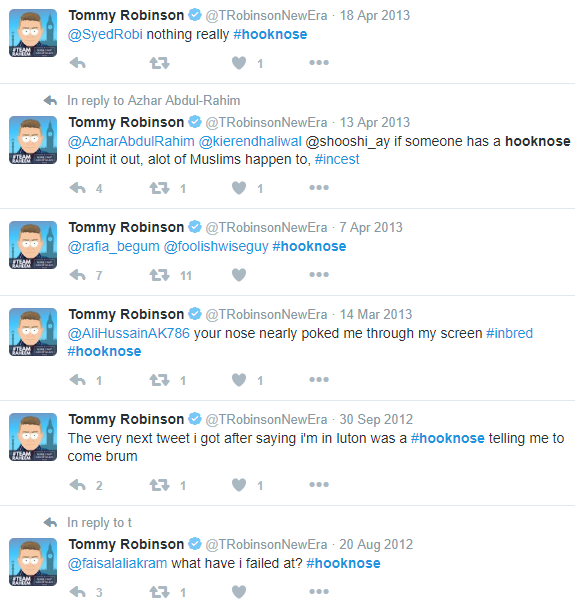 As you can see, the tweets were sent out over a period of eight months, so he can't even claim in his defense that he had a bad day (which we all do from time to time). Perhaps he can claim that he was just joking, and the tweets don't reflect his true feelings.

But he wasn't joking when he made a number of reprehensible statements in which he blamed all Muslims for the acts of grooming gangs and terrorists. From his autobiography again:

In this video from a September 2011 EDL rally outside the heavily Muslim Tower Hamlets borough of London, Mr. Robinson not only seems to blame all Muslims for the July 7, 2005 jihadi bombings of three Underground trains and a bus, but he also threatens reprisals against “the Islamic community” for any future attacks:

(An aside—the police tried to prevent Mr. Robinson from attending this particular demo; doing so violated his bail conditions from a previous arrest. To get past them, he donned a characteristically outrageous disguise:

After the demo, he evaded the police again by hopping on a public bus. They eventually caught up with him at his home and arrested him.)

More recently, in the wake of last year’s suicide bombing at the Ariana Grande concert in Manchester, Mr. Robinson delivered an epic rant in front of a mosque in that city. It was a mixed bag. The gist of it was that British politicians are selling out the British people. He touches on ideology: “The reality is if we want to stop what happened last night, and we want to really get to grips with it, we got to start identifying what is happening. And it’s happening because the Quran, in over a hundred verses, incites murder and war against us! That’s the reality. That’s the truth. These are facts. Facts are not hate speech.” But toward the middle he points to the brick apartment blocks around him and says, “When you see these communities and you see these houses, you think this is a British community where you might have British Muslims. They are enemy combatants in these houses! In these houses are enemy combatants who want to kill you, maim you and destroy you! They want to destroy our way of life.”

The best thing I can say in Mr. Robinson’s defense is that he’s inconsistent. He does, on some occasions anyway, recognize that not all Muslims are responsible for terrorism. He even has good personal relationships with some Muslims. “I invited Muslim friends to my wedding,” he wrote. “What’s more, they came.” Comedian Omar Hamdi sat down to a civilized dinner with him and wrote in The Independent that they “broke the ice quickly.” And in the Brian John Thomas wrap-up interview, Mr. Robinson said that he wanted to seek out Muslim views, and he showed a willingness to admit when his preconceptions weren’t met:

In the Newcastle rally which I mentioned earlier, he even demanded that the crowd not attack innocent Muslims for the acts of criminals and terrorists.

In all fairness, Tommy Robinson is not an intellectual. He didn’t go to college. He doesn’t worry a whole lot about philosophical consistency. He has little patience for nuanced distinctions such as the difference between Islam and Islamism. “It’s an invention to make us feel better about things,” he writes. “We’re pretending that someone who is an ‘Islamist’ is a separate variety of Muslim that we can neatly blame for all the wider woes the ideology brings. We’re deluding ourselves.” He has even less patience for people who make such distinctions (You know, people like me!) Regarding one such individual, he wrote “I can understand how that theory was well received at his university and in his debating society, but he’d never stood in Luton town centre on a Saturday, listening to them spewing their hatred. This kid, so wet behind the ears, was full of this ridiculous idea that you can negotiate with people who delight in seeing innocent people getting their heads sawn off with a knife.”

Mr. Robinson is willing and able to engage intellectuals. He's even willing and able to learn from them. But as a former(?) football brawler, he is far more comfortable taking to the streets, shooting from the hip, and maybe getting into a "ruck" to confront the criminals and terrorists who overran his hometown and his country. “Ban them, shut them up, get tough on them,” he writes, “and try to make it impossible for radical Muslims to exist in British society.”

So what do you think? Tommy Robinson: racist or not? Please leave a comment, either here or on my Facebook page.

Next up: Part IV—Most Shameful Hour

Posted by Michael Isenberg at 4:25 PM