Is Tommy Robinson a fascist?

No.
Part II of a series: Who is Tommy Robinson?
by Michael Isenberg.

England’s best known political prisoner was in the news again this weekend as thousands turned out in London for a Free Tommy Robinson protest on Saturday. If you watched the coverage in the mainstream media, you would have seen images of violence as groups of protesters hurled bottles, broke through police barricades, and chased Britain’s finest down the street. There’s even one video making the rounds of a member of the crowd giving a Nazi salute (in all fairness, it looks like he was trolling either counter-protesters or the police).

If you searched a little harder and looked at some of the grassroots videos, well, you’d have seen more images of violence, but you also would have seen much larger groups peacefully waving flags, chanting “Tommy, Tommy, Tommy,” listening to speeches, and clowning for the cameras. Sometimes both sides' narratives are true.

In much of the coverage of Mr. Robinson and his supporters, especially in the far-left media, there seems to be a recurring theme: “Robinson and his supporters have a history of racism and Islamophobia, and have many links to fascist organisations (Searchlight Magazine).” “Fascist and racist criminal Tommy Robinson has been jailed, but we can’t be complacent (standuptoracism.org).” “Protest for Tommy Robinson in London is a warning about the threat of fascism (The Socialist Worker).” In a learned dissertation, rife with nuanced definitions, Hope not Hate assures us that “Tommy Robinson is a far-right, Islamophobic extremist,” but “We don’t consider [him] a ‘nazi’, a ‘fascist’ or a ‘white supremacist.’” It’s a cheap trick — backhandedly associating your opponent with something heinous by insisting it isn’t true. In any case, even when purportedly denying that Mr. Robinson is a fascist, our left-of-center friends can’t stay away from the f-word, usually with the r-word (racist) trotting along in its footsteps.

Following the links to these articles, you’ll find a lot of name-calling, a smattering of quotations from Mr. Robinson himself, often without context, and a copy of his rap sheet, leaving out key details that change the complexion of some of the charges. What you won’t find is any actual evidence that Tommy Robinson is a fascist.

In Part I of this series, I provided the basic biographical stuff about Mr. Robinson: his upbringing in Luton, his soccer hooligan years, and how he got involved in anti-jihadist activism. I’ll address the accusations of racism in the next installment. In this part, I’ll take on the question of whether he is a fascist.

Let me cut to the chase: No.

The idea that Tommy Robinson is a fascist is ludicrous.

In the first place, he doesn’t embrace fascist ideology. I find no record of him calling for a dictatorship, a totalitarian state, or government control of the economy (which is more than I can say for his left-of-center critics). He just doesn’t seem interested in questions of how the government or the economy should be organized. The only part of the fascist program that he might possibly accept—and this is a stretch—is nationalism. But then, what’s the difference between nationalism and garden variety patriotism?

“But what about that time he joined the British National Party (BNP)?” his critics demand.

Yes, it’s true. For one year in the mid-2000s, Tommy Robinson was a member of the BNP, whose Führer at the time, Nick Griffin, has been quoted as saying (during his trial for inciting racial hatred), “I am well aware that the orthodox opinion is that six million Jews were gassed and cremated and turned into lampshades. Orthodox opinion also once held that the world is flat.” Nevertheless, when you hear the whole story of Mr. Robinson’s involvement with the BNP, you’ll see that it brings him far more credit than shame. From his autobiography Enemy of the State:

If anyone who wasn’t an anti-jihadist activist brought a group of black men to a meeting of white supremacists, our left-of-center friends would hail him as a hero. But instead, the incident is twisted — without the details of course — to lay bogus accusations of fascism at Tommy Robinson’s doorstep. (BTW, the incident was supposedly corroborated at the time by an article in Searchlight Magazine of all places. Unfortunately, as of press time, Searchlight has not responded to my request for information.)

From the beginning, neo-Nazis and other assorted fascists attempted to infiltrate and co-opt the English Defense League (EDL), the organization that Mr. Robinson co-founded. In a recent video, Brian John Thomas, of Israellycool fame, following Douglas Murray, places the blame for this squarely on the shoulders of the Left. “If you keep calling something far right,” he said, “then the far right want to join it. If you keep saying that they’re neo-Nazis, then the neo-Nazis want to join it.”

Also from the beginning, Robinson fought to keep these “wankers” out. Mr. Thomas followed the story as it was unfolding:

But the message that fascists were not welcome was not limited to the online forum. In Part I of this series, I mentioned Mr. Robinson’s confrontation with Paul Ray and “Nazi Nick,” but there were many other examples as well. At an early EDL March in Birmingham, Mr. Robinson writes,

At a September 2012 rally in Walsall, he had an unambiguous message for the BNP: the EDL didn’t want them—and the crowd had his back:

Throughout his career, Mr. Robinson has had a flair for the sensational—it’s part of the secret of his success. He once donned a burqa to sneak into a talk by a hostile journalist. After the speaker spent his entire presentation trashing him, Robinson stood up during the question period and threw off the burqa for a dramatic reveal. In another such stunt, members of the EDL—both black and white—burned a fricking Nazi flag. The Telegraph reported the story at the time, albeit with the somewhat illogical headline, “Will the flames of hatred spread?” 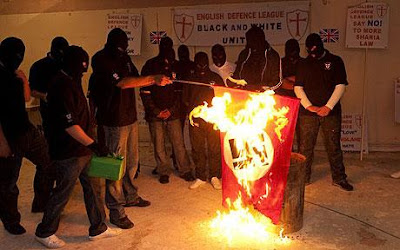 Unfortunately, Mr. Robinson lost control of the EDL while he served a ten month prison sentence for entering the United States with someone else’s passport (although how that’s a violation of British law mystifies me). And yet, even after this gave the fascists an opportunity to infiltrate his organization, Mr. Robinson kept trying to keep them out:

Sadly, with another prison term on the horizon, this time for a completely inane mortgage fraud charge, Mr. Robinson had to throw in the towel. He couldn’t keep the fascists out. And so he quit—left the organization (I’ll cover the mortgage fraud business, as well as some additional reasons he left the EDL in a future installment).

Of course, his critics have a pat answer for all this: It’s a trick! Writing in The Guardian, Alex Andreou warned, “Don’t be fooled by Tommy Robinson’s political sleight-of-hand. The former EDL leader may have left his party, but this is just an old far-right trick to attract the media and shift the debate.” Mr. Andreou provides a catalog of right-wing (and a few left-wing) figures who have done just that, but the only evidence he offers that this is actually the case with Mr. Robinson’s departure from the EDL was that there were “inconsistencies in his account.” I’ll have grounds more relative than this.

I’m not in the business of supporting fascists (albeit I am in the business of supporting their freedom of speech). So before I took up Tommy Robinson’s cause, I researched him carefully. And what did I find? No ideological smoking gun, the incident with the BNP, the flag burning stunt, the epic struggle to keep fascists out of the EDL, and when that was ultimately unsuccessful, his departure from that organization. I’m going to go out on a limb here and say that the snowflakes who shoot off their mouths about punching Nazis can only dream about the sort of genuine anti-fascist cred that Tommy Robinson has built over the course of his career.

Next up: Part III—But he IS racist, right?

Posted by Michael Isenberg at 4:47 PM