Bernard Lewis and the Clash of Civilizations.
By Michael Isenberg.

Yesterday I posted an obituary for Princeton historian Bernard Lewis, a towering figure in twentieth century Middle East studies who was no stranger to controversy. I noted that two controversies in particular will be forever linked with his name: his “Clash of Civilizations” hypothesis, which is the subject of this post, and “Orientalism,” which I will cover in a future article. 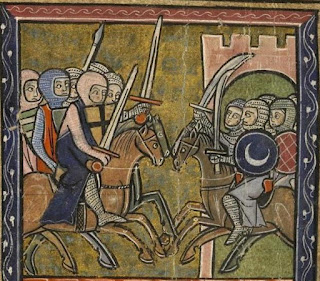 The Clash of Civilizations theory concerns the origins of Islamic conflict with the West, a topic which Professor Lewis explored in a 1990 essay in The Atlantic, “The Roots of Muslim Rage,” and expanded upon in his 2003 book, The Crisis of Islam: Holy War and Unholy Terror.

Lewis rejects the idea that Islamic radicalism is a reaction to particular policies of Europe or the United States. In The Crisis of Islam, he points out that one of the founders of modern jihadist theory, the Muslim Brotherhood’s Sayyid Qutb, formed his views about the West during a stay in the United States from 1948 to 1950. At that time, most of the US policies which are supposedly responsible for radical Islam—from the fall of Mossadegh, to the two Gulf Wars, to the invasion of Afghanistan—hadn’t happened yet.

Admittedly, America was a supporter of Israel at the time, and that did influence Mr. Qutb, but Professor Lewis argues that American support for the Jewish state during its early years was lukewarm at best. Lewis claims that Israel was far closer to the Soviet Union than the US at that time. In fact, during the 1956 Suez crisis, when Israel, France, and Great Britain attempted to wrest control of the Suez Canal from Gamal Nasser’s Egypt, the Eisenhower Administration intervened on the Egyptian side, applying diplomatic pressure that led to the withdrawal of Israel and its allies. And yet, the US’s support of Egypt brought no goodwill for America from the Arab world, whose governments proceeded to build alliances with the Soviets.

“Clearly,” Professor Lewis writes in the Atlantic article, “something deeper is involved than these specific grievances, numerous and important as they may be—something deeper that turns every disagreement into a problem and makes every problem insoluble.” If nothing the Western nations did can explain Muslim antipathy, one must look elsewhere. “It should by now be clear,” he continues,

This “clash of civilizations,” a phrase which was subsequently taken up by Samuel Huntington in his eponymous book, has its origins in both ideology and history. Indeed, as early as 1964, Lewis wrote about “The Revolt of Islam” as a force to be reckoned with in Middle Eastern affairs. Its origin is in the absence of a separation between the sacred and the secular in Islamic ideology. There is no rendering unto Caesar that which is Caesar’s and unto God that which is God’s in Islam. It’s all God’s.

Clearly, the “roots of Muslim rage” run deep in Islamic ideology. But fortunately, Islam is not monolithic and Muslims do not have to choose between waging perpetual war against the West or giving up on Islam altogether. There are other, gentler ways to interpret Muslim scripture. Quoted in his New York Times obituary, Professor Lewis says,
Posted by Michael Isenberg at 4:35 PM