Bernard Lewis, Edward Said, and why “Orientalism” is Bulls--t

Part 1: Who is Edward Said?
By Michael Isenberg.

In my recent obituary for Middle East scholar Bernard Lewis (1916-2018), I noted that he had been party to a number of controversies during his long career. Among these were his involvement with the two Bush Administrations, his “Clash of Civilizations” hypothesis, and the bitter accusations leveled against him in Edward Said’s book, Orientalism.

Professor Said and his Orientalism hypothesis have been significant forces in the field of Middle Eastern studies—not for the better—and they would be worth discussing in their own right, even if Professor Lewis had not been involved. In this post I will give some background on Professor Said and his magnum opus. Part 2 will go into more detail about what is Orientalism and give credit where credit is due for the things Professor Said got right. Then in Parts 3 and 4 I’ll cover what he got wrong. Finally, in Part 5, I’ll come full circle back to the Lewis/Said feud. 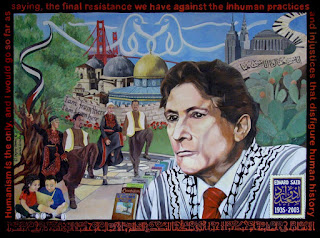 Edward Wadie Said (1935-2003) was born in Jerusalem, at the time part of the British Mandate of Palestine. His father was a Palestinian who had earned American citizenship through his service in the US Army during World War I. His mother was Lebanese. Both were Christian.

Growing up, shuttling between Cairo and Jerusalem, Edward felt alienated, part of many worlds, belonging to none. As he wrote in 2002’s Between Worlds, Reflections on Exile and Other Essays,

Said came to the United States in the 1950s (is it called “immigration” if you’re already a citizen?), where he completed his education, earning degrees from Princeton and Harvard. In 1963 he joined the faculties of English and Comparative Literature at Columbia.

Professor Said soon became an academic superstar. His colleague in the field of literary criticism, Camille Paglia sang his praises in her review of his book Culture and Imperialism. She called him “one of the leading literary critics of his generation…a brilliant and unique amalgam of scholar, aesthete, and political activist, an inspiring role model for a younger generation of critics searching for their cultural identity.” He penned over two dozen books, but Orientalism, published in 1978, is the one he is remembered for. The book was a precursor to today’s ugly politically correct attacks on “dead white men,” and “cultural appropriation”—decades before those terms were in common use.

The terms “Orient” and “Oriental” on the other hand, had a long history. For most of us in the twenty-first century, they are somewhat old-fashioned and possibly racist terms (opinions are divided) referring to the Far East: China, Japan, and so on. However, Said’s use of “Orient” hearkens back to an earlier era, the eighteenth century, when it referred to what we now call the Middle East. And although Said bemoans that the term “Orient” expanded along with nineteenth century European imperialism to encompass all of Asia, he generally continues to use it throughout the book to refer to the Middle East. His choice of this outdated usage is not accidental. I’ll have more to say about that in Part 4.

The Introduction to Orientalism is not promising, fraught as it is with opaque academic-ese. For example, “My whole point is to say that we can better understand the persistence and durability of saturating hegemonic systems like culture when we realize that their internal constraints on writers and thinkers were productive, not unilaterally inhibiting.” But don’t be discouraged by this. The language becomes marvelously readable once the introduction is over and the main body of the text begins.

The flow of the book is more or less chronological, a series of theatrical tableaus—to use one of Said’s favorites metaphors—tableaus that the West has staged to represent the East. These go back to ancient times, where Euripides’ The Bacchae portrays the drunken, demonic, and ultimately murderous acolytes of Dionysus as, according to Said, symbols of Asian Persia, in contrast to the Apollonian rationality of European Greece. From there, Said races through the millennia, slowing only when he gets to nineteenth and twentieth centuries, the bulk of his book. Along the way we meet a cast of prominent scholars and authors whose work has been indispensable to those of us who have done research in the field: William Jones, “the undisputed founder of [modern] Orientalism,” Silvestre de Sacy, Ernest Renan, Edward William Lane, Sir Richard Francis Burton, H.A.R Gibb, Louis Massignon, and of course, Professor Lewis.

Professor Said concedes that the book is personal for him.

As we shall see, when Said says that he does not always approach his subject in a spirit of unemotional, academic emotional detachment, we should believe him.

Perhaps you’ve notice that so far, I have not defined “Orientalism.” That’s problematic, because neither does Professor Said. At no point in his three hundred page doorstop does he provide a concise statement of what Orientalism is. Nevertheless, during the course of the book, certain recurring themes emerge, and we can piece together a definition from that. Which I will do in the next installment of this series.

Posted by Michael Isenberg at 6:51 AM