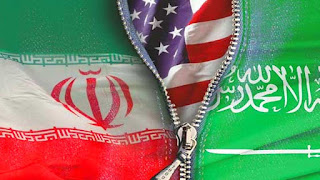 In my previous post, I argued that practically everybody in Washington has the wrong approach to responding to the murder of Washington Post journalist Jamal Khashoggi.

The media demands a knee-jerk reaction, divorced from any overall strategy, just because Khashoggi was one of their own.

As for President Trump, he does have an overall strategy. At least as far as his public statements and actions are concerned, that strategy is to shamelessly suck up to the Saudis, one of the most repressive regimes on the face of the planet, and a leader in both funding terrorism and spreading the jihadist philosophy that underlies it (I concede the possibility that President Trump may take a harder line with the Saudis in private).

So if both the media and President Trump are pursuing the wrong approach, what is the right one?

Any US reaction needs to be part of a larger, coherent strategy toward the Middle East in general and Saudi Arabia in particular. It needs to be a strategy we adhere to consistently, not just when the latest victim of Saudi repression happens to be a media darling. It also needs to be a strategy which supports the interests of the United States. And our primary interest in that part of the world is to defend ourselves against Islamic terror.

For guidance we can look to the lessons of the Cold War in general, and in particular, two policies of the Nixon Administration which were extremely effective in making the Soviet Union less aggressive: linkage and triangular diplomacy.

Mr. Nixon explained the first policy in his 1980 book, The Real War: 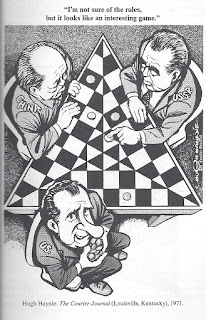 As for triangular diplomacy, the triangle was Soviet Russia, the People’s Republic of China, and the United States of America. The idea was that, going forward, the US would engage both Russia and China diplomatically, rather than engaging Russia and isolating China, as it had been doing for decades. The strategy leveraged the Russian-Chinese split that existed at that time. Historically, the two peoples had looked down on each other as barbarians. The communist takeover of China in 1949 brought a temporary thaw to the relationship, but the rivalry soon reasserted itself. In Nixon’s words, “As competition between the two communist giants developed, it was increasingly directed toward leadership of the communist world, with each accusing the other of deviation from ‘true’ communist orthodoxy [The Real War p. 135].” By the early months of the Nixon Administration, the “competition” had degenerated into an all-out border war.

“Promoting Sino-Soviet rivalry cannot, in and of itself, be a U.S. policy,” Nixon wrote. “But the rivalry is there, and it provides an opportunity, an environment, in which to design a policy [The Real War, pp. 302-3].”

Ken Hughes, of the University of Virginia’s Miller Center, described how Nixon put that design into practice: “He would play China against the Soviet Union, the Soviet Union against China, and both against North Vietnam [Richard Nixon: Foreign Affairs].”

For example, as we learn from his 1978 autobiography, RN:The Memoirs of Richard Nixon, Nixon told the Soviets, “The only beneficiaries of US-Soviet disagreement over Vietnam is China [p. 406]. Then he told the Chinese, “The only gainer in having the war continue is the Soviet Union. [p. 568].” He really was “Tricky Dick.”

There are many similarities between the Soviet Union during the Cold War and Saudi Arabia during the War on Islamic Terror that make the latter a perfect candidate for Nixonian policies.

Like the Soviet Union, Saudi Arabia wants—in fact needs—things from the United States: arms deals, investment funds to make its economy less dependent on oil revenue, and summits to give their leaders stature and legitimacy in the eyes of their own people and the world. A perfect opportunity for the US to insist on linkage to things the United States wants: intelligence on jihadist groups, an end to Saudi funding of them, and most important, an end to spreading the Wahhabi doctrine of political Islam around the world. A perfect opportunity for linkage, and a far better policy for the US than first bowing to Iran under the Obama Administration and then toeing the line for Saudi Arabia under Trump.

Also like the Soviet Union, the Saudis have a rival for the leadership of its respective world. Shiite Iran has locked horns with Sunni Saudi Arabia over which nation best represents the “true” Islam. This rivalry colors every aspect of Iranian/Saudi activity, from constant Iranian sniping at any mishaps during the annual pilgrimage or haj (Saudi Arabia’s role as Custodian of the Two Holy Sanctuaries is a source of great prestige in the Muslim world), to vicious proxy wars in Syria and Yemen. 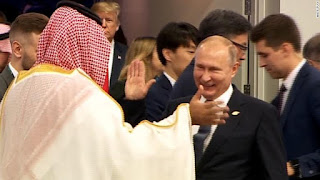 There is one complication in any hardline US policy toward Saudi Arabia: Russia and its president Vladimir Putin. If Saudi Arabia fears losing the United States as an ally, it may turn to them. Indeed, some Middle Eastern countries, the United Arab Emirates, for example, are already doing this. Their leaders may be thugs, but they’re not stupid. They saw how the Obama Administration threw Egyptian president Hosni Mubarak under the bus during 2011’s Arab Spring. They also saw how steadfast an ally Putin has been to Syria’s Bashar Assad during the civil war in that country. Any US Middle East policy must be accompanied by a complementary Russia policy. While a comprehensive Russia strategy is beyond the scope of a blog about Islam, the annals of the Nixon administration contain many examples of how to keep the Russians from meddling the Middle East. We can also learn some lessons from Turkish president Recep Erdogan, who recently succeeded at halting the Russian/Syrian advance on Idlib.

This week offers a perfect opportunity to take linkage and triangular diplomacy on their maiden voyage: negotiations between the parties in the Yemen civil war began today in Stockholm. I would love to see Trump tell the Saudis, “The only beneficiaries of US-Saudi disagreement over Yemen is Iran,” and then turn around and tell Iran, “The only gainer in having the war continue is Saudi Arabia.” If that could hasten a settlement, the Yemeni people would be free of the starvation and disease that the war has inflicted on them, and the world would be free of a breeding ground for jihadists, who flourish wherever instability reigns.

Posted by Michael Isenberg at 8:25 AM