The “Baby it’s Cold Outside” Jihadi—in his own words.
by Michael Isenberg. 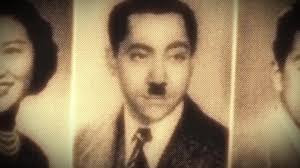 Many of you have seen the article making the rounds of cyberspace last week which added yet another twist to the “Baby it’s Cold Outside” controversy. According to the article, written by Adam Pasick, the classic holiday tune has not only “come under scrutiny in the #MeToo era for its light-hearted portrayal of sexual coercion—though a close reading suggests the song could just as easily be a sly homage to female empowerment.” It also “played a small but crucial role in the rise of modern Islamic fundamentalism:”

(A more detailed account of Qutb’s years in Greeley may be found in David von Drehle’s 2006 article, “A Lesson in Hate.”)

When I read Qutb’s complaints about America, he did not sound like a culture warrior to me. He sounded like a man who can’t get a date. His obsession with “seductive legs,” not to mention waists, lips, and chests, is a dead giveaway. What motivation other than sex would get the male of the species so spun up over a bad haircut? Granted, the Hitler mustache that he sported during those years, when the wounds of losing loved ones during World War II were still fresh, probably didn't help him any. I concede that this is pure speculation on my part, but it seems to me that Sayyid Qutb was the ultimate incel—involuntary celibate. Women didn’t want to go out with him, so to protect his ego, he blew his personal problems up to literally cosmic proportions, and invented the modern theory of jihad. In his own mind he was, in the words of the Psalm, the stone which the builders rejected, but which, with God’s help, would become the chief cornerstone.

Anyway, Qutb’s entanglement in the “Baby it’s Cold Outside” controversy gives us an excellent opportunity to shine the disinfectant of sunlight on his writings, in particular his signature work, 1964’s Milestones, and glean from it some insight into the modern jihadi movement.

The title of the book refers to the milestones that Islam must follow in order to become “the leader of mankind.” Now that East and West have failed because of their decadence, according to Qutb, “the turn of Islam and the Muslim community has arrived.”

World leadership is the final milestone. The first is to reconstruct the original seventh century Muslim community of Muhammad and his Companions. They were the best generation because Islam for them was an all-encompassing way of life—not just one part of it, nor an academic discipline. And they were completely governed by the Quran, free of the influence of foreigners like the Greeks and the Jews. In this utopia, homosexuality and other sexual immorality will be prohibited. Women will be free to tend to their “basic responsibility of bringing up children,” relieved of the burden of choosing a career. Indeed, men will also be relieved of that burden since “the society automatically recognizes his capabilities” and will assign a job to him. Science will be permitted, as long as it stays in its proper bounds and doesn’t cross the line into metaphysics. Examples of science crossing that line, which presumably will be off limits going forward, include evolution and psychology.

Only after the Muslim heart has been prepared by the creation of such a totalitarian nightmare will it be ready for the next milestone: jihad [struggle] against the unbeliever. The chapter on jihad is the longest in the book, and certainly the most relevant for understanding modern Islamic fundamentalism, since it bears directly on a debate about its nature that we in the West have been conducting since September 11.

Our left-of-center friends tell us that Islam is a religion of peace. It has no desire to force itself on the West. Indeed to do so would violate the Quran, which says, “There is no compulsion in religion (2:256).” And although the Quran does talk about jihad, conventional warfare is the “Lesser Jihad.” The “Greater Jihad” is to war internally against one’s own individual weaknesses. The only reason Muslims have warred against the West, according to the Left, is to defend themselves from the West’s attacks on them (colonialism, overthrow of Mossadegh, Gulf Wars, etc.). As for their attacks on Israel, please be assured that they are merely anti-Zionist, not anti-Jew.

On every one of these points Qutb either disagrees in no uncertain terms, or he understands the terms in some way that is very different from the way those of us in the West do. For example, “The peace which Islam desires” according to Qutb, “[is] that the obedience of all people be for God alone.”

Compulsion, to Qutb, isn’t what we in the West understand it to be either. According to him, it is important for the individual to choose Islam freely—but Qutb has some peculiar notions about what constitutes compulsion and freedom. Living under any government that is not Islamic is, in his view, compulsion. “The real servitude is following laws devised by someone, and this is that servitude which in Islam is reserved for God alone.” Such laws are obstacles to free choice. Muslims have “no recourse but to remove them by force.” “Islam does not force people to accept its belief, but it wants to provide a free environment…in which they will have the choice of beliefs.” “It is the right of Islam to release mankind from servitude to human beings so that they may serve God alone…all men are free under Him.” That's really messed up. According to Qutb's logic, if you live under laws crafted by legislators that you elected, you’re in servitude. But if a Muslim army invades your country and imposes shari’ah on it, you’re free.

Qutb does believe in the so-called “greater” jihad, but only as preparation for the “lesser:” “Before a Muslim steps into the battlefield, he has already fought a great battle within himself against Satan.”

To war against the unbeliever is commanded by the Quran. Qutb cites verse 9:29, for example:

In case there’s any doubt from the text that the Quran is not talking about defensive war, but rather an unprovoked war of expansion, Qutb spells it out:

Qutb ridicules those Muslims who believe that defense is the ultimate objective of jihad: they’re dupes of “shrewd orientalists.”

Among the unbelievers who must be forced into a state of subjection, Qutb singles out one group in particular to be reviled. He warns of the

Try to argue that that’s not anti-Jew, just anti-Zionist.

The apologists for Islamic fundamentalism will no doubt argue at this point that Qutb was just one guy—we can’t judge a whole movement based on his insane opinions.

Qutb was not a fringe figure. It’s difficult to overestimate the extent of his influence, thanks to his role in the Muslim Brotherhood. As I wrote previously the Brotherhood lies at the center of the web of individuals and organizations, what Andrew McCarthy called the “Siamese connectedness,” that comprise the infrastructure of modern Sunni extremism. Abdullah Azzam, co-founder of al-Qaeda, was a Brotherhood alumnus, as were al-Qaeda Number Two Ayman al-Zawahiri and 9/11 mastermind Khalid Sheikh Muhammad. Hamas is the Brotherhood's Palestinian branch.

In the edifice of modern jihadism, Qutb, sadly, became a cornerstone after all. But I doubt that God had much to do with it.

Posted by Michael Isenberg at 9:29 AM