The Other Mideast Story

Protests are raging in Lebanon and Iraq. Here are the basics.

The gruesome suicide of ISIS “caliph” Abu Bakr Baghdadi as he fled US forces and detonated his suicide vest was a richly deserved and I hope painful end for the bastard. The world is a better place without him, and the story has rightly dominated the headlines from the Middle East during the past week.

But Baghdadi’s death has overshadowed another story, unnoticed by many in the West. Massive protests have virtually shut down two Middle Eastern countries: Lebanon and Iraq. The story is still unfolding, but as with any unrest in that part of the world, there is the potential for the consequences to echo across the globe. (There are other reasons that this story has received so little attention. I’ll come to that later). 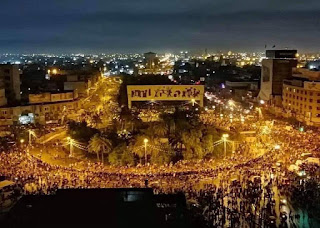 The protest in Iraq had been planned for some months. But a couple events in the days leading up to the scheduled October 1 demonstration gave new urgency to it. On September 25 there was a protest outside the office of Prime Minister Adil Abd’ al-Mahdi to highlight the plight of the many Iraqis with advanced degrees who are unable to get jobs. The protest was brutally broken up by authorities. Then on the 27th, al-Mahdi announced his intention to transfer Lieutenant General Abd’ al-Waheb as-Saedi from the Iraqi Counter Terrorism Force to the defense ministry. As-Saedi is a hero of the liberation of Mosul from ISIS terrorists; the decision sparked a firestorm of backlash on social media.

In the wake of these events, the planned demonstration mushroomed beyond all expectation, with demonstrators in Baghdad’s Tahrir Square numbering in the hundreds of thousands and protests spreading to eleven other cities.

Government forces have hit back hard with an arsenal of water cannons, tear gas, and bullets (not the rubber kind). Internet service has been shut down to prevent protesters from learning the harshness of the measures and from using social media to coordinate their activities. The Green Zone, home to parliament, government offices, and foreign embassies, has been barricaded; the government has no intention of allowing a repeat of the 2016 storming of the Iraqi parliament. Unidentifed “security forces” raided the NRT and Tigris satellite channels and the Saudi al-Hadath channel, destroyed and confiscated equipment, and attacked employees, wounding at least one. The cost of the government crackdown has been high. According to The Economist, 250 people have been killed, as of the end of October,

Like the French Revolution, the protests in Lebanon were sparked by a government funding crisis. The Lebanese pound is officially pegged to US currency—1507 pounds to the dollar—and like many countries that interfere with the free market for currency, the result is disastrous. As a poor economy put downward pressure on the pound, the government drained its reserve of dollars in an effort to prop it up. Desperate for cash, the Lebanese government sought to borrow from the World Bank and other international agencies, which demanded harsh austerity measures in return. The resulting package of spending cuts and tax increases proved extremely unpopular—especially the tax imposed on VoIP telephone calls which became known as the “WhatsApp Tax.”

Although sporadic protests were held as early as September, things began in earnest following an October 17 cabinet meeting to discuss the proposals. The protests swelled. According to some estimates, a quarter of the country’s population has participated. Key roadways were blocked. A human chain stretched along the Mediterranean Coast for 100 miles, from Tripoli to Tyre. Although the violence in Lebanon has not come up to the level in Iraq, there have been some fatalities, and things have been getting worse in the last few days, as I discuss below.

Events came to a head October 29, when Prime Minster Saad Hariri declared himself at a “dead end” and resigned. He’ll stay on as a caretaker until a replacement is found. Protests, in the meantime, have shown no sign of slowing.

Commentators are at a loss to figure out what to make of it all. The BBC’s Jeremy Bowen asks, “Is the region slipping into a new Arab spring?” While hedging on the answer, he notes that the issues which led to those 2011 protests are largely unresolved. The Economist noted that Iraq and Lebanon are only two out of numerous countries that have been deluged with mass protests recently, both inside the Muslim world (Algeria, Pakistan) and beyond (Hong Kong, France, and many others). Their writers were at a loss to find common elements in all these protests. After considering and rejecting numerous theories—rising inequality, shifting demographics, foreign conspiracies—they threw up their hands and subtitled their article “Something in the Air.”

Still, there are three grievances that permeate all the reporting from Iraq and Lebanon: corruption, unemployment, and pitiful public services.

Both nations have rigid governmental structures, with certain positions set aside for Sunnis, Shiites, and in the case of Lebanon, Christians. This sectarian spoils system is laid out in agreements that the various parties made to put an end to political violence—the Taif Agreement in Lebanon near the end of its civil war in 1989, and the political settlement reached in Iraq as the Sunni insurgency wound down in 2016/2017. In practice it has yielded a system of patronage jobs under the control of political leaders, who fill them with their relatives and supporters. The protesters demand a “technocratic” government, in which job assignments are made based on skills rather than political connections. Indeed, that is what Prime Minister al-Mahdi in Iraq promised upon taking office, but failed to deliver. This is why the resignation of Prime Minister Hariri in Lebanon hasn’t satisfied the protesters there: they want the whole system replaced.

Unemployment is high in both countries, especially for the young. As of September 2019, the International Labour Organization model estimates that the overall unemployment rate is 7.9% in Iraq and 6.2% in Lebanon. For young people, ages 15-24, the news is significantly worse: 16.5% and 17.6% respectively. These numbers have been consistent for a decade or so. Unofficial numbers are even higher. Last year, Lebanese President Michel Aoun claimed a whopping 46% of the Lebanese labor force is unemployed. The Iraqi economy is burdened by the destruction of infrastructure during fifteen years of war, while Lebanon, a country of some six million people, has had to absorb a million or more refugees from the civil war in Syria.

Both countries are plagued by unreliable infrastructure, and cannot depend on services that we take for granted in the West: trash pickup, electricity, clean water.

As much as I hear my left-of-center friends blame the United States for the travails of the Middle East, that is one thing I haven’t heard from the protesters. The US just doesn’t seem to be on their radar right now. No mention of America in any of interviews I’ve read, and I haven’t seen anything along those lines from the protesters on Twitter either (usual caveat: I’m sure it can be found, but it’s clearly rare).

But there is a country who the protesters do blame for their problems. This aspect of the demonstrations has been largely overlooked in what little press coverage there has been. But it became impossible to ignore Friday night, when rioters in Karbala, Iraq attacked a foreign consulate, threw burning objects over the wall, and replaced its flag with an Iraqi one. The consulate belonged to the Islamic Republic of Iran.

Iran has its Islamist tentacles deep in both Iraq and Lebanon. Iranian-backed militias operate in both countries and Iranian puppets are influential in their governments. As the American Islamic Forum for Democracy’s Zuhdi Jasser pointed out in his podcast yesterday, “The demonstrations in Baghdad this week, as they grow, are a rejection of Iranian colonization of Iraq. They’re a rejection of the corruption of the radical Shia supremacism, of their Shari’a state that they brought from Iran, into Iraq and into Lebanon as Hezbollah has been controlling Lebanon and the same demonstrations are happening.”

Dr. Jasser also opined on why the demonstrations have received so little press coverage, especially compared to the murder of Jamal Khashoggi by agents of the Saudi government a year ago. “Those demonstrations do not fit the narrative. Remember the Obama Administration was knee deep, butts and elbows as they say (there’s another term for it but I won’t say it on my podcast), knee deep with the Iranian regime. Everything at the altar of that nuclear deal. Everything. So the narrative that Iran is not as bad as we think is something that the traditional legacy media is stuck in.”

Iran is clearly feeling the heat in Iraq and Lebanon, and is seeking to deflect it. Unlike the protesters, Iranian leaders are talking about the United States. In a speech to graduating army cadets October 30, Supreme Leader Ali Khamenei said, “The U.S. and Western intelligence services, with the financial backing of reactionary countries in the region, are spreading turmoil,” and recommended that Iraq and Lebanon follow the example of his own country during similar protests in 2017 and 2018: unleash the rent-a-mobs and the military. “They (U.S. and Saudi Arabia) had similar plans for our dear country, but fortunately the people... came out in time and the armed forces were ready and that plot was neutralized.”

In Lebanon, Khamanei’s lap dog, Hassan Nasrallah, leader of Hezbollah, apparently received his barking points. In a speech on October 25, he urged his followers to stop protesting and go home, warning darkly that they were being manipulated by American and Israeli conspiracies. Since then, Hezbollah supporters have attacked and driven away other protesters, smashing chairs, pulling down tents, and violently prying phones out of the hands of anyone who tries to video them.

It appears that Iranian supporters are engaging in similar violent tactics in Iraq. Some of “security forces” firing on the protesters wear black clothing and masks, their affiliations unclear. It’s widely believed that they are members of Iran-backed militias.

I wish the protesters every success in eliminating Iranian influence in their countries and restoring their economies. It will be an uphill battle however. The political settlements that are responsible for so much corruption were hammered out with great difficulty among enemies who had until then been at each other’s throats. They wouldn’t be easy to re-negotiate under the best of circumstances, and certainly not with powerful interests vested in the status quo. And if Iraq and Lebanon really want their economies to flourish, they need to unleash the power of free markets, rather than relying on government controls like pegged currencies. Sadly, capitalism is not popular in that part of the world. The real tragedy is that in two centuries of reforms and dashed hopes, the nations of the Middle East have tried everything but freedom.

Posted by Michael Isenberg at 3:09 PM