The Death of Baghdadi: What Muslims are Saying

I had expected this milestone in the Islamic State’s downfall to be met with some enthusiasm. Instead, it was met mainly with paranoia. 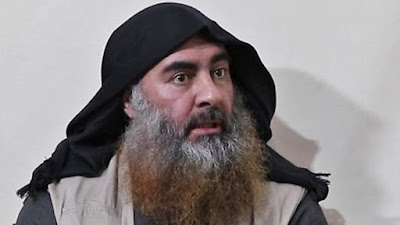 As the news of the death of terrorist Abu Bakr al-Baghdadi, “caliph” of the Islamic State, spread across the globe yesterday, a friend of mine tagged me on Facebook. He wanted to share his opinion of the way President Trump announced it, and ask me what I thought about it:

I agreed with my friend’s notion that going out like a little b---h would harm Baghdadi’s reputation in the eyes of the Muslim world. Especially the part about being chased by a dog, an animal which is considered unclean in Islam. But since I was less sure about his high opinion of my own expertise, I thought it would be best, instead of handing down pronouncements like a stereotypical Orientalist, to let the Muslim world speak for itself. So I took to Twitter to learn what Muslims had to say. And there were some surprises.

The usual caveat: Exercises like this can give real insight, but it’s not a scientific process. The best I can do is read enough tweets to get a sense of what people are saying (I spent a couple hours on that) and then try as conscientiously as I can to present a representative sample. Also (as I’ve already learned from the discussions I’ve had on social media since yesterday), while I take full responsibility for my own commentary, the tweets themselves are the opinions of the tweeters, and not me. Don’t shoot the messenger.

So first of all, what I didn’t find. Much to my surprise, I didn’t see a single tweet from a Muslim impressed by Trumps’ bluster or scornful of Baghdadi’s cowardice. Not one. I’m sure there are some out there, but clearly they’re rare.

So what did I find?

There were some tweets to the effect that world is a better place now that Baghdadi is dead and will finally face his Maker:

This one came from a surprising source: 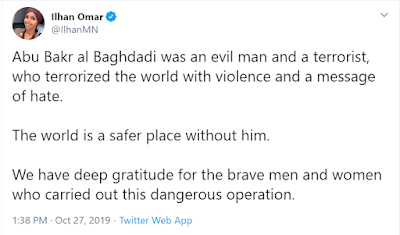 For many years, Representative Omar has been quite outspoken in her indignance that people expect her, as a Muslim, to condemn Muslim terrorism. In her (incorrect) opinion, it has nothing to with Islam, and therefore nothing to do with her. Not sure what it means that she departed from form this time.

One has to admire the concise elegance of this one:

Still, tweets of this type, calling out Baghdadi for the scum that he was, were rare. This also surprised me. Back when the Islamic State was at its peak, many in the Muslim world were eager to distance themselves from its atrocities, and the hashtag “Not in my name” trended. Because of that, I had expected this milestone in the Islamic State’s downfall to be met with some enthusiasm. Instead, it was met mainly with paranoia.

It is common in some parts of the world that when something happens, it's never thought to be the result of social or economic forces, or coincidence, or even plain old stupidity. Rather, it must be a conspiracy of powerful interests plotting against the people. Which is perfectly understandable for anyone who lived through the hell that was the Islamic State. In any case, that view of the world is definitely in play in the case of Baghdadi's death. Many don’t believe he's even dead. The way he died was highly suspicious, they say: 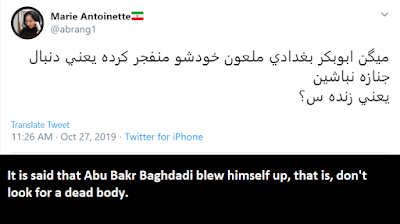 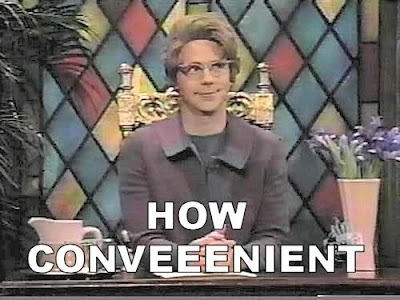 Numerous tweeters pointed out that we’ve heard this before and the news of his demise was greatly exaggerated. One even provided a graphic listing all eight previous deaths: 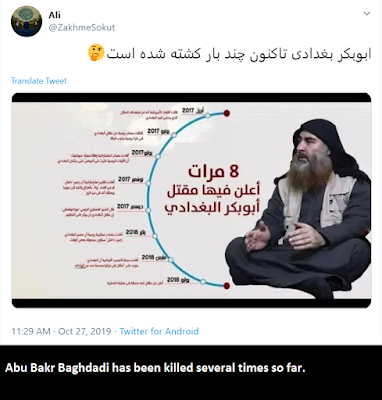 Others had more of a sense of humor about it: 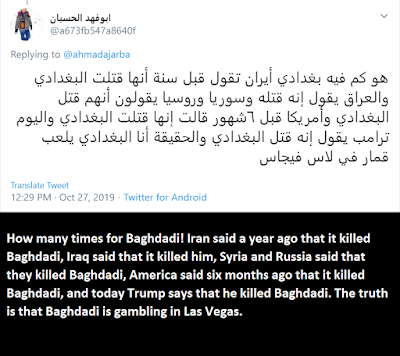 But regardless of whether Baghdadi was really dead or not, many believe there is more to this than meets the eye. Trump’s announcement was merely a ploy, they say, to distract from the impeachment investigation, and criticism of his betrayal of the Kurds, and to secure his reelection: 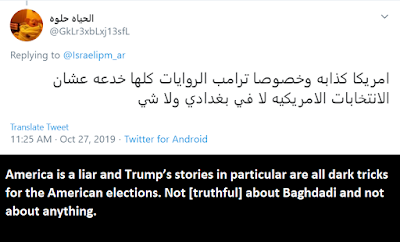 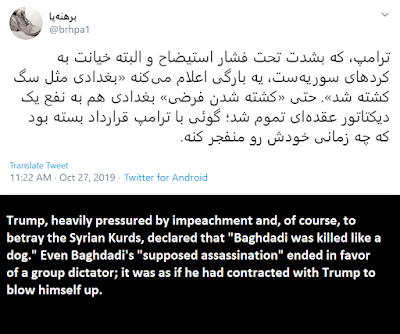 Many pointed out that this was not the first time something like this has happened going into a US presidential election: 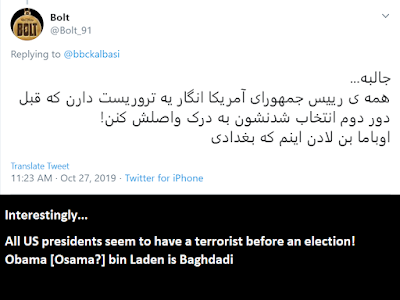 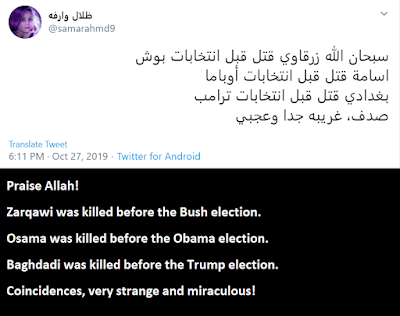 Of course it wouldn’t be a discussion about American elections without a certain sinister hand in the mix: 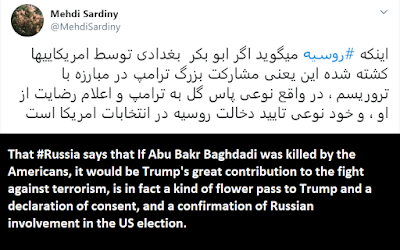 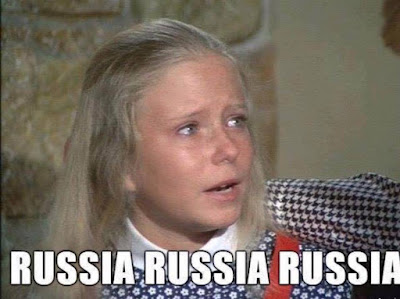 Another theory: Erdogan knew where Baghdadi is, and coughed up the information as part of his deal with Trump to screw the Kurds: 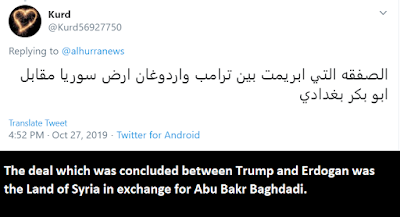 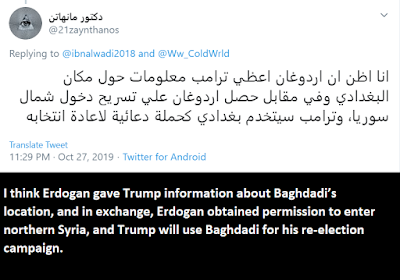 Given that the killing of Baghdadi came so closely on the heels of the Erdogan deal, there may be some merit to that one.

Sadly, many Muslims feel that the death of Baghdadi will have little effect on the War on Terror. Like Hydra, cut off one head from the jihadist monster, and two (or more) take its place: 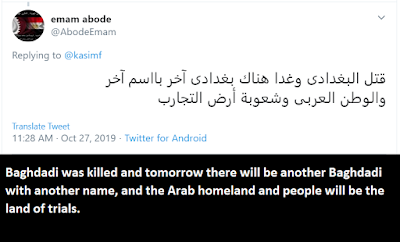 Even sadder, not everyone seems to be unhappy about that.

And some are positively triumphant. As the Quran promises “If you are patient and fear [Allah], their tricks shall not harm you.” (3:120) 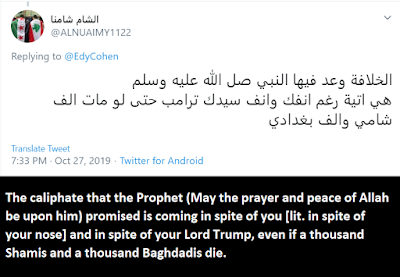 I believe the “Shami” referred to here is Abu Mahmud ash-Shami, also known as Sami al-Oraydi, a former al-Nusra official. Last month the US put a five million price on information about his whereabouts.

Many in the Muslim world blame the US for the rise of terrorist leaders like Baghdadi: 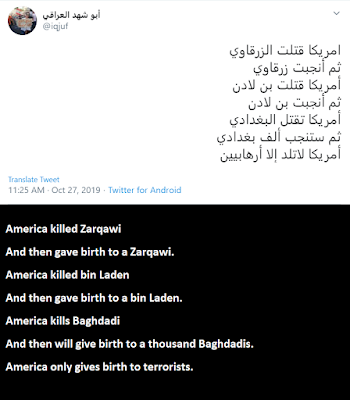 On this last point, I’ve argued previously that it’s complicated. There’s no doubt that what Bernard Lewis called “The Roots of Muslim Rage” is primarily motivated by the teachings of Islam, and not anything the West has done. But it’s also true that, thanks to its military incursions into the Middle East, the US has inadvertently created lawless areas in which Jihadists were free to operate. Just something to keep in mind as President Trump ramps up the US military presence in Saudi Arabia for a possible conflict with Iran. Which this last tweeter thinks is what this whole thing is about: 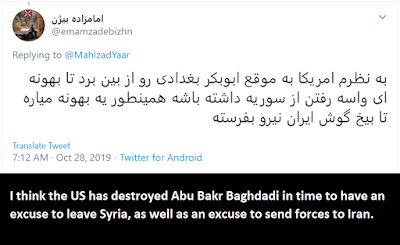 Posted by Michael Isenberg at 1:22 PM