Getting Medieval on your You-Know-What

The Greater Jihad and the Lesser Jihad.
Part III of a Series—What Does Jihad Really Mean?


Speak of jihad as Islamic Holy War and some Social Justice Warrior, or perhaps an academic, will inevitably “correct” you. “Jihad is one of the most misunderstood concepts in Islam,” they’ll intone piously. “Americans," a word they utter with just a hint of contempt, “think of it as bloodshed, as a war of the Muslim against the unbeliever. But really jihad, which literally means ‘struggle’ or ‘exertion,’ is an internal struggle, a struggle against your own soul to overcome your weaknesses.” They might go on to explain that the internal struggle is the “Greater Jihad” while the war against the unbeliever, which is always defensive, is the “Lesser Jihad.” They're blissfully oblivious to the fact that even a “lesser” jihad is still a jihad, a religious obligation for Muslims, and that therefore they're contradicting themselves when they say that jihad isn't Holy War at all.

So what does jihad really mean? 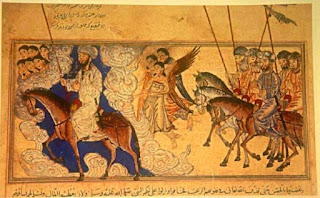 In Part I of this series, I explored what the Quran has to say on the subject. I looked up every instance of the word jihad and its various forms (jahid, tujahidun, etc.). There were forty-one of them. I found that in the majority of cases, it was ambiguous. The Quran commands Muslims to “struggle (tujahidun) in the Way of Allah” without actually saying what that means. But in six cases it is clearly a conflict between Muslims and non-Muslims, and in two cases it is clearly an armed conflict. In no cases are there any reason to think it means an internal struggle.

However, despite pride of place, the Quran is not the only source of authority in Islam. The Hadith—the narratives about Muhammad and his Companions—are almost as important to the jurists. The use of the term jihad in the Hadith was the subject of Part II. This was a more ambitious project, as the search returned nearly 800 hadith containing some form of the word jihad. As in the Quran, many are ambiguous. I did find one hadith in which Muhammad describes a jihadist as “one who strives against his own soul.” But only one. The majority of the relevant narratives are clearly about violent conflict against the unbeliever. And they even state, in no uncertain terms, what the greatest jihad is:

Around the year 900, six collections of Hadith (seven according to the Maliki school of thought) had been canonized—designated the official collections that, together with the Quran, form the basis of the shari’ah in Sunni Islam.

But that didn’t end discussion about jihad (or anything else for that matter). Over the next few centuries, the Great Medieval Commentators of the Muslim religion would study, rehash, dissect, analyze and analogize the Law. What they had to say about jihad is the topic of this installment.

We do, in the era of the Great Commentators, encounter for the first time the concept of a “greater” and “lesser” jihad in which the Jihad of the Soul is the greater. According to a 2005 article by Sh. G. F. Haddad, “Documentation of ‘Greater Jihad’ hadith,” it appears as a hadith in the Tarikh Baghdad (History of Baghdad) of al-Khatib al-Baghdadi (d. 1071),

A similar account occurs in Al-Zuhd Al-Kabir by al-Khatib’s contemporary Abu Bakr al-Bayhaqi (d. 1066). In the next generation, Abu Hamid Ghazali (d. 1111)—with whom you’re familiar if you’ve read my novel The Thread of Reason—recounts this hadith in his massive encyclopedia of Islam, Reviving the Science of Religion (Vol. 3, Ch. 2 “Efforts for Good Conduct in the Ways of God”).

Despite such distinguished sources, the hadith is problematic. It doesn’t appear until four centuries after the death of Muhammad, and Bayhaqi says that the chain of transmission—the sequence of narrators between Bayhaqi and the prophet himself—“contains weakness.” The notion of chain of transmission is a core concept in Hadith scholarship, used to distinguish genuine hadith from fabricated ones. Furthermore, not only does this hadith not appear in one of the canonical collections, and therefore doesn’t carry the force of law, but it directly contradicts the hadith I cited above about the best form of jihad being that of a man whose blood is shed, which appears in the Sunan ibn Majah and does carry the force of law. Or as PeaceWithRealism.org put it, rather more bluntly, “Muhammad never made such a statement.”

In any case, the “Greater Jihad” hadith, the notion that jihad is an internal struggle, is not typical of what most of the Great Muslim Commentators of the Middle Ages have to say about the subject: that jihad is about getting medieval on your You-Know-What if you're an unbeliever. And they say it far less ambiguously than the Quran and the Hadith. They were writing law books, and they put the discussions about jihad in the same chapters as the regulations for conducting warfare. So the link between the two is unmistakable.

These legal manuals address such questions as whether jihad is purely defensive (absolutely not); whether it is permissible to kill non-combatants such as women and children (most authors say no) or monks and hermits (more of a controversy there); whether cruel weapons like mangonels, fire, and flooding are permitted (most authors say yes); whether it is permissible to kill prisoners (depends on the circumstances); whether one must kill the enemy with weapons or if it’s permissible to set them on fire (opinions vary); the laws governing plunder; and under what circumstances a retreat or a truce is permissible. It is generally agreed that the enemy must be called upon, before hostilities begin, to choose between conversion to Islam, submission to Muslim rule and payment of the jizya, or death. But there’s some debate as to whether one must call upon them to convert a second time before resuming hostilities after a truce.

Ghazali, for example, in his Kitab al-Wajiz fi Fiqh Madhab al-Imam Shafi’i (Book of the Summary of Jurisprudence of the School of Imam Shafi’i), writes,

As the title indicates, Ghazali’s book is an epitome of the work of Abu Abdullah al-Shafi’i (d. 820). Looking at al-Shafi’i’s own work is enlightening, because in his discussion of jihad he cites a number of verses from the Quran about warfare, even though they don’t specifically mention jihad. For example, 9:29 (which is also cited by many other authors in the context of jihad), “Fight against those who do not believe in Allah nor in the last Day, and do not make forbidden what Allah and His messenger have made forbidden, and do not practice the religion of truth, of those who have been given the Book, until they pay the jizya off-hand, being subdued.” Thus, in places where the Quran is ambiguous as to whether warfare=jihad, Imam Shafi’i connects the dots.

We tend to think of Averroes (d. 1198) as a philosopher rather than a scholar of shari’ah—the one true disciple of Aristotle in Islam—but he was a judge as well, and wrote several legal works, one of which, Bidayat al-Mudjtahid (The Beginning of Jurisprudence) has come down to us. In the chapter on jihad, he covers many of these same issues. In good, Aristotelian fashion, he gives a thorough account of the opinions on them prior to his. I highly recommend reading it (it’s in Dr. Bostom’s book) to get a flavor of what commentary on the shari’ah was like.

These are not fringe figures or bastions of a medieval past who are no longer relevant today. Imam al-Shafi’i was the founder of one of the four great schools of law that comprise Sunni Islam. Even today the Shafi’i school predominates in East Africa, Indonesia, Yemen, and parts of Egypt and Turkey.

Abu Hamid Ghazali has been called “the greatest Muslim after Muhammad.” His work was bedside reading for Hassan al-Banna, founder of the Muslim Brotherhood, and has been quoted in ISIS propaganda.

These scholars were respected figures in a civilization that revered scholars. Many had the ears of kings. So what they wrote didn’t merely get sealed in books and stored harmlessly in libraries. People acted on them, with real world consequences. If we have any doubt about how to interpret them, we need not confine ourselves to the words on the page. We can look at how their contemporaries interpreted them, by how they put them into practice. In Professor Fernández-Morera’s words,

In the final installment of this series, I'll address what modern commentators have to say about jihad.

Posted by Michael Isenberg at 5:29 AM