(mostly).
Part II in a Series.
By Michael Isenberg.

Today marks the anniversary of a tragedy. 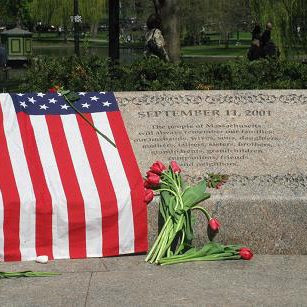 Sixteen years ago, Muslim terrorists hijacked four airplanes and turned them into weapons with which they cruelly murdered almost three thousand people. As President Trump said in his speech this morning (he was talking specifically about the victims of Flight 77, but his words apply to all victims of terror), “Every one of them had a family, a story, and beautiful dreams. Each of them had people they loved and who loved them back. And they all left behind a deep emptiness that their warmth and grace once filled so fully and so beautifully.” (It’s a touching speech; read it in its entirety at whitehouse.gov.)

In the wake of that terrible day, many of us took on new missions. Some confronted terror on the battlefield—the bravery of the men and women who chose that path is inspiring. Others confronted terror by gathering intelligence or building weapons. And still others, myself included, attacked the ideology of terror at its roots. And the roots are the doctrine of jihad.

In commemeration of September 11 then, here is the next installment in my series about jihad:

Every once in a while, social media erupts in a debate over what that word means. While the literal meaning is struggle or striving, jihad is often translated holy war—a violent conflict of Muslims against unbelievers. However, those of the Islam-is-a-religion-of-peace persuasion claim this is a misunderstanding. They say jihad is more of an internal struggle to master one’s own weaknesses and conquer one’s inner demons.

The latest round in the debate was kicked off by activist Linda Sarsour’s May address to the Islamic Society of North America, in which she called for jihad against the Trump Administration. She said in her remarks that what she meant by that was “a word of truth in front of a tyrant ruler,” or what many would call “speaking truth to power.” However, her critics insist that she was being disingenuous. Jihad means violence, they say, and Ms. Sarsour knew perfectly well she was calling for the violent overthrow of the American government.

In Part I of this series, I explored what the Quran has to say on the subject. I looked up every instance of the word jihad and its various forms (jahid, tujahidun, etc.). There were forty-one of them. I found that in the majority of cases, it was ambiguous. The Quran commanded Muslims to “struggle (tujahidun) in the Way of Allah” without actually saying what that meant. But in six cases it was clearly a conflict between Muslims and non-Muslims, and in two cases it was clearly an armed conflict. In no cases were there any reason to think it meant an internal struggle or speaking truth to power.

However, despite pride of place, the Quran is not the only source of authority in Islam. The Hadith is almost as important in forming the basis of the shari’a. The use of the term jihad in the Hadith is the subject of the present installment.

The word hadith literally means a narrative or a telling. In other words, a story. Typically it’s a story about something Muhammad did or said, but sometimes it’s about one of his companions. I’ve never seen an estimate how many hadith there are, but it must be in the hundreds of thousands. The intellectual effort that has gone into studying and authenticating them over the centuries is mind-boggling. In the early years of Islam, scholars compiled what they considered the most reliable hadith into six collections that were canonized. In Sunni Islam, these collections have the force of law. (A seventh, the Muwatta Malik, is also canon but only in the Maliki school of thought).

Analyzing what they have to say about jihad is a bit more of a challenge than analyzing the Quran. A search of the seven canonical collections, using the hadith database at sunna.com turned up nearly eight hundred narratives that contained some form of the word jihad. I read every one of them and eliminated uses of the word that clearly had nothing to do with the religious obligation of jihad—in various forms it can mean fatigue, poverty, judgment, and even sex—the versatility of Arabic is a wonder to behold. I also eliminated hadith that were narrated by a guy named Mujahid, which happens to mean jihadist.

As in the Quran, many were of little help. Eighty-eight, almost half, commanded jihad without saying what it meant. For example,

Others were more germane. One (and only one) even spoke of jihad as an internal struggle:

The hadith that Ms. Sarsour referenced, about speaking truth to power, appeared five times (this is common since a particular hadith can appear in multiple collections or in different versions within the same collection):

So she didn’t make it up, and it has the force of shari’a behind it.

Still, the majority of hadith about jihad are clearly talking about violent conflict against the unbeliever. Many of these (45) refer to jihad as something you leave your home for. Or something that you die for (28). Or if you survive, something you get spoils of war for (17). Or all of the above:

Women can challenge their inner demons or speak truth to power. But going to war is more problematic and a substitute was found.

Muhammad also made exceptions for the elderly and the disabled.

Finally, I found twenty-one miscellaneous hadith where jihad is clearly discussed in the context of battle. For example,

So yes, in the hadith, the ideas of jihad as inner struggle and speaking truth to power can be found. But in general, jihad is exactly what its critics say it is: armed conflict against the unbeliever.

The great collections of hadith were completed around the year 900. In the next installment of this series, I’ll look at what later medieval commentators had to say on the subject.

Michael Isenberg writes about the Muslim world, medieval and modern. His forthcoming novel, The Thread of Reason, is a murder mystery that takes place in Baghdad in the year 1092 and depicts the battle for the Muslim soul between those who embrace science and tolerance, and those who would throw in their lot with mysticism and persecution instead.

Posted by Michael Isenberg at 3:50 PM