Turn a Goblet Upside Down

Omar Khayyam, born on this day in 1048, was a brilliant scientist and a talented poet. But was he a good Muslim?

It sometimes feels like the phrase “Golden Age of Muslim Science” is a misnomer. Yes, there may have been cutting edge scientific research in the lands ruled by the caliphs during the Middle Ages. But those great scientists you hear about weren’t such great Muslims. Not to mention that they were often persecuted by their co-religionists. It almost seems like their accomplishments were in spite of Islam, and not because of it.

I exaggerate, of course. Still, there’s some truth to it. Avicenna violated the shari’ah nightly by drinking wine while he wrote, his spectacular productivity fueled by the fruit of the vine. Ibn Haytham's books were burned in Baghdad. In a stunning act of impiousness, Rhazes took on the Quran itself, “a work which recounts ancient myths,” he wrote, “and which at the same time is full of contradictions and does not contain any useful information or explanation.”1 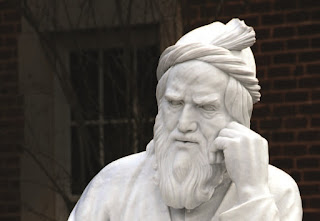 Then there’s Omar Khayyam. Today’s his birthday, May 18.2 Born in 1048 in the city of Nishapur, in what’s now Iran, Omar had become one of the leading scientists of his time by age 26, when the sultan Malik-shah tapped him to head up the royal observatory and reform the calendar. Thanks to Edward Fitzgerald’s bestselling English translation of his verses, The Rubiayat, he is also one of the leading poets of all time.

So Omar Khayyam was a brilliant scientist and a gifted poet. But was he a good Muslim?

His contemporaries and near-contemporaries were divided. Ali ibn Yusuf al-Qifti (d. 1248) said The Rubaiyat may have been pious on the surface, but “inside it are serpents to the shari’ah and shackles on the mosques.”3 The Sufi Najm ad-Din ar-Razi (d. 1256) counted Omar among “the philosophers, materialists, and naturalists.” To a pious 13th century Muslim, them’s fightin’ words. Omar was a “perplexed lost man,” he wrote, who “expressed his blindness” in poems written “in the extremity of wonder and ignorance.”4

Omar’s reputation fared better among people who actually knew him. One of the great Sufi poets, Sanai (d. ca. 1135), wrote, “Omar is attentive to guard the substance of honor of prophecy.”5. The historian Muhammad ibn al-Husayin al-Bayhaqi (d. 1169) wrote that “Sultan Malik Shah treated him as he did his companions, and the sovereign, Shams al-Muluk in Bukhara respected him more than anyone and sat with him on the same throne.” I believe the Shams al-Muluk mentioned here is Shams al-Muluk Nasr (d. 1080), brother of Terken Khatun, who was the wife of Malik-shah and a fascinating and powerful individual in her own right; readers of my novel The Thread of Reason will be familiar with her. In any case, had Omar really been the serpent that al-Qifti would have us believe, it would have been impossible for these respectable monarchs, who had to at least make a show of defending the faith, to honor him so.6

From the same source we learn that Abu Hamid Ghazali (d. 1111), the most influential religious scholar of Omar’s time, couldn’t make up his mind. On one occasion, he was so impressed by Omar’s explanation of some Quranic verses that he exclaimed, “May God increase such learned ones as you; consider me as one of your followers and be amicable with me!” But on other topics, Ghazali was less impressed. Once, when Omar was engaged in a “lengthy elaboration” of how a God who is One can create a universe which is diverse (this problem of “unity and multiplicity” was of great concern to the scientists and philosophers of the day), Ghazali was relieved to have the lecture cut short by the cry of the muezzin, calling the faithful to prayer. “Truth came and falsehood vanished,” he said tartly.

There is no doubt there are aspects of Omar’s life and works that are irredeemably un-Islamic. I’ve written previously about his irreverent humor and obssession with wine. Like all true scientists, he was a skeptic, reluctant to pretend to know things he didn’t, regardless of what was written in scripture or what the powers that be wanted to hear. This got him in trouble on more than one occasion. Al-Qifti again: “When the people of his time censured his faith and his secrets became visible, he feared for his life and stopped his tongue and his pen and arguing impiously, and disclosing impious secrets of secrets.”

Al-Qifti doesn’t tell us exactly what “impious secrets of secrets” put Omar’s life in such danger, but they were serious enough that he had to skip town and go on the Hajj to Mecca to prove his Muslim bona fides.

So what “secrets” did Omar conceal in his “soaring poetry” and what do they tell us about his relationship to Islam?

The author of The Rubaiyat was clearly, at the very least, what we would today call a “cultural Muslim.” His verses teem with mosques, the five daily prayers, and the Fast of Ramadan, not to mention expletives like “By Allah!” and “Muhammad’s Tomb!” These, of course, were the things of daily life in the time and place that he lived, so perhaps we shouldn't read too much into them.

But we can definitely read something into some verses which are unapologetically un-Islamic. IMHO, there’s nothing “muddied” about them. The heresy is right there on the surface.

Where Islam demands a strict regimen of prayer and fasting, and adherence to a code of upright behavior, Omar writes,

So far as in thee lies, follow the example of the profligate,
destroy the foundations of prayer and fasting:
hear thou the Word of Truth from Omar Khayyam,
“Drink wine, rob on the highway, and be benevolent.”8

Where Islam promises life beyond the grave, Omar is skeptical. Islam is all about eternal life, far more so than Judaism or Christianity. “Threats of Hell and Hopes of Paradise”9 appear in the Quran hundreds of times. The essence of Islam is to not become too attached to this material, temporary, and wicked world, but to secure one’s place in the World to Come. And yet, Omar anticipated Hamlet’s “undiscover'd country from whose bourn no traveller returns” by five hundred years:

Strange, is it not? that of the myriads who
Before us pass'd the door of Darkness through
Not one returns to tell us of the Road,
Which to discover we must travel too.10

Whatever awaits us beyond the grave, Omar can’t believe it is the Quran’s threat of eternal hellfire. Allah is omnipotent, He predestined our every move (and that’s a very Muslim idea). He would never be so unjust as to punish us for what we cannot control.

Oh Thou, who didst with pitfall and with gin
Beset the Road I was to wander in,
Thou wilt not with Predestin’d Evil round
Enmesh, and then impute my Fall to Sin?11

Said one—“Folks of a surly Master tell,
“And daub his Visage with the Smoke of Hell;
“They talk of some sharp Trial of us—Pish!
“He’s a Good Fellow, and ‘twill all be well.”12

Where Islam has a long and proud tradition of religious scholarship, Omar questions its value. The great Doctors of Theology and Shari’ah, like his sometime friend Ghazali, are, at best, wasting their lives on these mysteries. Despite all their ijma (consensus), qiyas (analogy), and ijtihad (interpretation), they are going to die, like all of us.

Myself when young did eagerly frequent
Doctor and Saint, and heard great argument
About it and about: but evermore
Came out by the same door as in I went.13

At worst, they’re full of it:

To drink wine and consort with a company of the beautiful
is better than practising the hypocrisy of the zealot;14

In the face of such doubts, Omar recommends the very un-Islamic idea of carpe diem:

Some for the Glories of This World; and some
Sigh for the Prophet’s Paradise to come;
Ah, take the Cash, and let the Credit go,
Nor heed the rumble of a distant Drum!15

Yet despite all his skepticism, heresy, and sin, Omar would only go so far in challenging the doctrines of Islam, and no farther. He never doubted the most fundamental precept—the Oneness of Allah. The oldest collection we have of The Rubaiyat is the Ouseley Manuscript in the Bodleian Library at Oxford. In the very first verse, Omar writes,

IF I have never threaded the pearl of Thy service,
and if I have never wiped the dust of sin from my face
nevertheless, I am not hopeless of Thy mercy,
for the reason that I have never said that One was Two.16

I think it’s fair to say that Omar Khayyam was a complex figure. The respected scholar, honored by kings, who was nevertheless skeptical of the scholarly enterprise. The freethinker who winked at wine-drinking and other violations of the shari'ah, who nevertheless knew the Quran well enough to earn Ghazali’s praise. The heretic, literally run out of town, who nevertheless never waivered on the fundamental monotheism of Islam. It is this combination of the sacred and the profane which makes him such a compelling character.

If I’m drunk on forbidden wine, so I am!
And if I’m an unbeliever, a pagan or idolator, so I am!
Every sect has its own suspicions of me,
I myself am just what I am.17

Omar continued to be just what he was well into old age. On what was literally the last day of his life, at age 83, Omar was still delving into the mysteries of the physical universe, still a practicing Muslim, and still aware that the tension between the two put him in need of some forgiveness. His son-in-law (whose name I won't give—that would be a spoiler for the upcoming Thread of Reason sequel) recounted Omar's final hours to the historian Bayhaqi:

Omar asked us to remember him after he was gone—in a way that was true to how he lived:

Friends, when ye hold a meeting together,
it behoves ye warmly to remember your friend;
when ye drink wholesome wine together,
and my turn comes, turn a goblet upside down.19

In that spirit, here is a toast to Omar Khayyam. Happy 972nd!