If I do not drink wine, God’s knowledge was ignorance

The humor of Omar Khayyam.

When we think of the great figures of history, one trait that we tend not to think of is humor. After all, they were busy waging war, handing down laws, writing philosophical tomes, and making world-altering scientific discoveries. Surely these things are no laughing matter.

But of course that’s not true. They were human beings, and like all human beings, some are stiffs, others will have you rolling on the floor laughing. Abraham Lincoln was constantly telling jokes (There was a good one in the 2012 movie about him, starring Daniel Day Lewis, although I don't know if it's one of the jokes Lincoln told in real life. It involved Ethan Allen and a picture of George Washington in an English privy.). Churchill’s rejoinders against various antagonists, mostly female, are world-famous (“Winston, you’re drunk.” “Bessie, you’re ugly. And tomorrow morning, I’ll be sober.”) Ronald Reagan made the age issue in his re-election campaign completely go away with a well-timed zinger (“I am not going to exploit, for political purposes, my opponent’s youth and inexperience”). Even his opponent was laughing. 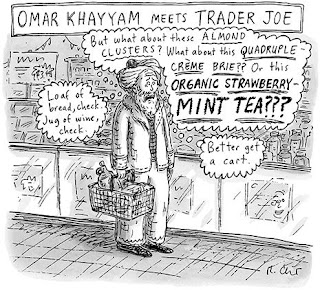 Certainly humor is not the first thing that comes to mind when one thinks of Omar Khayyam (1048-1131). For westerners, that would be his poetry, The Rubaiyat. Omar was a scientist at a time when the Muslim world was in the throes of turning its back on science. So it’s no surprise that The Rubaiyat is a world-weary collection of verses. Among the themes are the futility of knowledge and the inevitability of death:

Myself when young did eagerly frequent
Doctor and Saint, and heard great argument
About it and about: but evermore
Came out by the same door as in I went.

With them the seed of Wisdom did I sow,
And with my own hand wrought to make it grow:
And this was all the Harvest that I reap'd—
“I came like Water, and like Wind I go.” (1)

And yet, amid these grim sentiments, there are flashes of humor, no doubt Omar's way of dealing. Omar generally marshalled it in the service of rationalizing his wine-drinking, another way of dealing. Wine, of course, is prohibited in Islam.

I drink Wine; my Enemies, high and low,
Say—“Do not drink it; ’tis Religion’s Foe.”
When I learned wine was a Foe, I answered—
“’Tis permitted to drink the Foe’s Blood, though.” (2)

In another bit of twisted logic, Omar argues that God doesn’t mind, and anyway, if Omar doesn’t imbibe, God would be diminished:

I drink wine, and every one drinks who like me is worthy of it;
My wine-drinking is but a small thing to Him;
God knew, on the Day of Creation, that I should drink wine;
If I do not drink wine, God’s knowledge was ignorance. (3)

Besides, how can wine be a sin? God created it. It’s blasphemous to say it’s sinful! And if it is a sin, well, it’s God’s fault if we drink. He put temptation in our path.

Why, be this Juice the growth of God, who dare
Blaspheme the twisted tendril as a Snare?
A Blessing, we should use it, should we not?
And if a Curse—why, then, Who set it there? (4)

In any case, Omar has no intention of repenting:

They say to me, “May God give thee repentance!”
He himself will not give it; I will none of it; let it be far off! (5)

For more about Omar and wine, see my recent post, “A Loaf of Bread, a Jug of Wine, and Thou.”

Omar’s humor spilled over from his poetry into his real life. He perpetrated the only practical joke I’ve come across in my studies of the medieval Muslim world (which, as I’m sure you’ve figured out by now, are extensive). According to Zakariya Qazwini, who lived about a century and a half after Omar,

In another, slightly earlier version of the story (7), the jurist was none other than Abu Hamid Ghazali, the era’s foremost scholar of shari’a, and a key figure in the eradication of science in the Muslim world. As we have other stories about Ghazali studying with Omar, and treating him dismissively, this is plausible. Ghazali’s sense of humor, BTW, tended toward insults.

This last story is from a somewhat later source, the Tarikh-i-Alfi, History of the Millennium, written in the 1580s to commemorate the year one thousand in the Muslim calendar.

The author Tarikh-i-Alfi, Ahmad Tatavi, cited the story as evidence that Omar believed in reincarnation. This was a rather serious accusation, since most Muslims consider reincarnation to be heresy.

Sounds like Tatavi needed to get a sense of humor.

(2) The Ruba’iyat of Omar Khayyam, Boston: L.C. Page and Company (1898), translated by Edward Heron-Allen, verse 38, adapted by me for rhyme and meter.

Posted by Michael Isenberg at 12:28 PM