A Loaf of Bread, a Jug of Wine, and Thou

Omar Khayyam was a towering figure in the Muslim World at the turn of the 12th century. We in the West know him mainly as a poet, author of the Rubaiyat, but he was also a scientist, a philosopher, a mathematician, the physician of princes, and the companion of sultans.

But Omar’s learning was not limited to the physical sciences. His insights into the Quran and the Hadith were well-respected by scholars of Shari’ah such as Abu Hamid Ghazali. To this day, Ghazali is one of the most influential thinkers in Islam. We have a story about him and Omar from the historian Abu’l-Hasan Bayhaqi (d. 1169). Bayhaqi knew Omar; while still a teenager, his dad took him to visit the aging polymath in his hometown of Nishapur, Iran. According to Bayhaqi, Omar once explained some point “concerning a certain verse” (presumably of the Quran) to a group of people, including Ghazali. Ghazali was not an easy man to please, and didn’t always get along with Omar, but on this occasion he exclaimed, “May God increase such learned ones as you; consider me as one of your followers!” Granted, being something of dick, Ghazali then felt compelled to add that he did not expect such a stellar analysis from a scientist [1]. 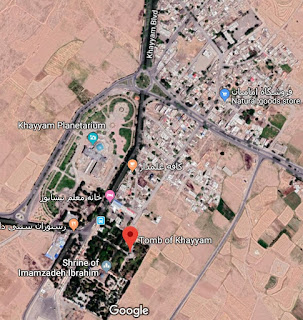 Needless to say, Muslims in general, and Iranians in particular, are proud to have such a brilliant and pious scholar and poet among their numbers. Omar’s beautiful mausoleum in Nishapur was rebuilt in the last century. It is set amid tall pine trees and colorful gardens in what is otherwise a brown and dusty town surrounded by brown and dusty farmland. The park rather stands out on the satellite image. Nearby are the Khayyam Planetarium and Khayyam Boulevard.

And yet, there’s a fly in the ointment: Wine. The oldest collection of Omar’s poems we have is the Ouseley Manuscript in the Bodleian Library at Oxford, transcribed in 1460. Out of the 158 verses that appear there, 90 of them, by my count, or 57%, are about wine—something prohibited in Islam.

I began this series on Islam and wine by citing some of the verses in the Muslim scripture that prohibit the use of alcohol, but I also observed that the literature of the Middle Ages suggests that the prohibition was not very well enforced. In Part II, I backed that up with examples from the history books. Religious hardliners like Ghazali were not happy with wine shops all over town and drinking parties in the palaces. In Part III I wrote about how they struck back, with some success. Since I appropriated Omar Khayyam as the hero of my latest novel, The Thread of Reason, it seems fitting to wrap up the series with a question that has occupied biographers and historians for centuries: Did he drink?

For such an esteemed personage as Omar Khayyam to be as obsessed with wine as his poetry shows him to be is something of an embarrassment to Muslims.

Some condemned his verses. The historian Abu’l-Hasan al-Qifti (d. 1248) wrote that Omar’s poems “are inwardly like snakes who bite the Shari’ah.” [2]

But others attempted to explain them away, and these attempts began almost the moment Omar drew his final breath. The wine in the Rubaiyat, they said, should be interpreted symbolically. Numerous theories have been proposed as to what exactly it symbolizes, but the most common is that it symbolizes the joy of mystic communion with Allah. According to this theory, Omar was an adherent of the Islamic esoteric movement known as Sufism, and the wine in his poetry should be understood in that light, as it is for other prominent Sufi poets such as Rumi and Hafiz. Thus, the question of what wine symbolizes in the Rubaiyat cannot be separated from the question of whether Omar Khayyam was a Sufi.

The theory is not entirely without merit. There are certainly many verses in the Rubaiyat where this interpretation would make sense. Consider one of the most famous:

A Book of Verses underneath the Bough,
A Jug of Wine, a Loaf of Bread—and Thou
Beside me singing in the Wilderness—
Oh, Wilderness were Paradise enow! [3]

It’s certainly plausible, but by no means certain, that all the elements of Sufism are there. The wilderness is the dwelling of the holy man. Ishmael, Moses, Jesus—they all found Allah in the desert. The loaf of bread is the simple diet of the Sufi. The book of verses is his song. As for the jug of wine, it’s the ecstasy of communion with Allah, the ‘Thou,’ singing beside the ‘me.’

But there is no corroboration of that from Omar himself, or any of his contemporaries or near-contemporaries, unless you count Abbas Kayvan Qazwini’s claim that the ghost of Omar Khayyam visited him in a dream and told him it was so [5]. Indeed, it is unusual for someone who has dedicated his life to rational pursuits such as astronomy and mathematics to go in for mysticism. In the same passage where he compares the Rubaiyat to snakes, al-Qifti also tells us that even though “Sufis understood his poems outwardly and considered them to be part of their tradition,” when Omar “arrived in Baghdad, members of [a Sufi] tradition and believers in primary science came to him and began to socialize with him. He did not accept them.”

The debate continues into our own time. Robert Graves, better known as the author of I, Claudius, threw his hat into the ring when he agreed to collaborate with Omar Ali-Shah to publish The Original Rubaiyat of Omar Khayyam (1968), based on a manuscript that had allegedly been in the Shah family for many generations and supported the Sufic interpretation. Alas, Shah never produced the original manuscript, and it is now widely believed that the whole thing was a hoax—of which Graves himself was the greatest victim.

Mehdi Aminrazavi of the University of Mary Washington took on the question in The Wine of Wisdom (2005), unquestionably the best Khayyam biography out there, and an indispensable help to me in writing both The Thread of Reason and this article. On the question of Omar Khayyam and Sufism, Dr. Aminrazavi concludes, “None of his biographers have alluded to his Sufi affiliation, and the one exception I have mentioned previously asserts that Sufis misunderstood his Ruba’iyyat and interpreted them as they wished,” i.e., the al-Qifti passage, cited above. Further, “For all we know, Khayyam neither had a Sufi master nor was he initiated into a Sufi tradition.” Both transmission of knowledge from a master and the initiation ritual are of great importance in Sufism, so their absence in Omar’s case is highly significant.

Although he doesn’t accept that Omar was a Sufi, and therefore the notion that wine in the Rubaiyat represents Sufic communion, Dr. Aminrazavi nevertheless argues for a symbolic interpretation, and indeed he took the title of his book from it: “Khayyam’s use of the concept of wine is as the ‘wine of wisdom,’ a philosophical image which enables one to come to terms with the merciless forces of nature through an all-too-human-wisdom.” Aminrazavi cites a number of verses in support of the wine of wisdom symbolism, including this one:

The mystery is great and the answers are rare
Wise men have searched but you should not care
Make thy own heaven here with this moment and wine
For the heaven is a fairy tale, nothing but Air.

With all due respect to Dr. Aminrazavi, I disagree with the wine of wisdom metaphor, along with the Sufic metaphor. I believe that when Omar talks about wine in the Rubaiyat, what it symbolizes is…wine. I have two reasons for that. Regarding the first, consider the following, somewhat humorous verses from the Ouseley manuscript: #38,

I drink wine; my Enemies, high and low,
Say—“Do not drink it; ‘tis Religion’s Foe.’
When I learned wine was a Foe, I answered—
“’Tis permitted to drink the Foe’s Blood, you know.” [6]

I drink wine, and every one drinks who like me is worthy of it;
my wine-drinking is but a small thing to Him;
God knew, on the Day of Creation, that I should drink wine;
if I do not drink wine, God’s knowledge was ignorance. [7]

In these verses, we see that Omar clearly views wine drinking as a sin. He knows it’s prohibited, but he drinks it anyway. He can’t help it. It’s foreordained. Fortunately, Allah is a loving god, and won’t judge him too harshly.

This notion that wine is weakness and sin recurs in seven other verses (#45, 62, 64, 78, 99, 104, and 118). It’s not consistent with the view that wine symbolizes mystic communion—which is not a sin (or at least a Sufi wouldn't say it was). I haven’t run across this angle in the poetry of known Sufis like Rumi. Nor is it consistent with the wine of wisdom—also not a sin in a religion which puts as high a premium on scholarship as Islam does. But wine equals sin makes perfect sense if it’s to be understood as simply plain old tavern-variety fermented grape juice.

The second reason I believe that wine means wine is not based on quite so scholarly an analysis. I’m rather fond of wine myself, and have some experience with it. Reading the Rubaiyat, I just get the gut feeling that Omar knows what he’s talking about.