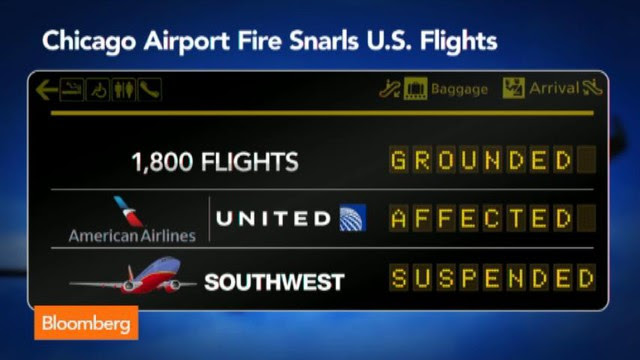 Bloomberg News reported on Saturday that Brian Howard, who is suspected of starting last week’s fire at the Aurora, IL air traffic control hub, posted a private Facebook message ranting against the US Government, calling government employees “lazy,” and citing their “immoral and unethical acts” as the reason “why terrorists and 3rd world nations hate us.” He added that the US deserves “retribution.”

Regarding the message, Bloomberg said,

In a related story, ABC News reported that Aurora police chief Greg Thomas informed the media, "It appears to be a fire set by a contract employee. There was no terrorist act."

Posted by Michael Isenberg at 1:25 PM No comments:

I join many in the Muslim world in grieving for Ms. Naimi.

Posted by Michael Isenberg at 6:28 AM No comments:

The Lebanese militia group Hezbollah is one of the key combatants in the Syrian Civil War (on Assad’s side). Many problems are blamed on them – civilian deaths, car bombs, economic disloation; it’s gotten so that #Because_Hezbollah_entered_Syria is now trending in Lebanon. And while many of the tweets are quite serious, some Lebanese are having fun with it, in a darkly humorous way: 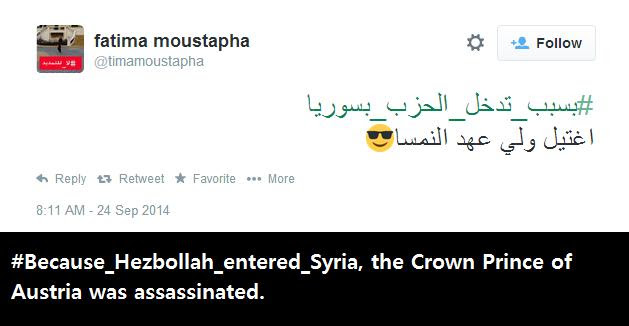 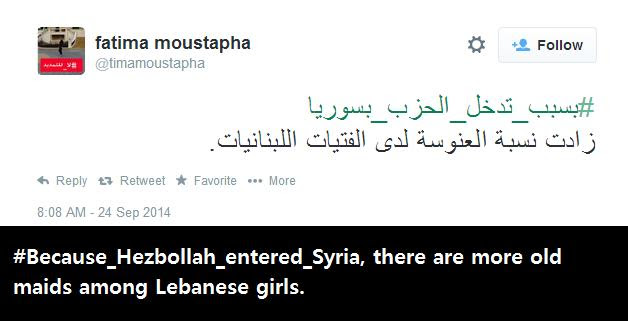 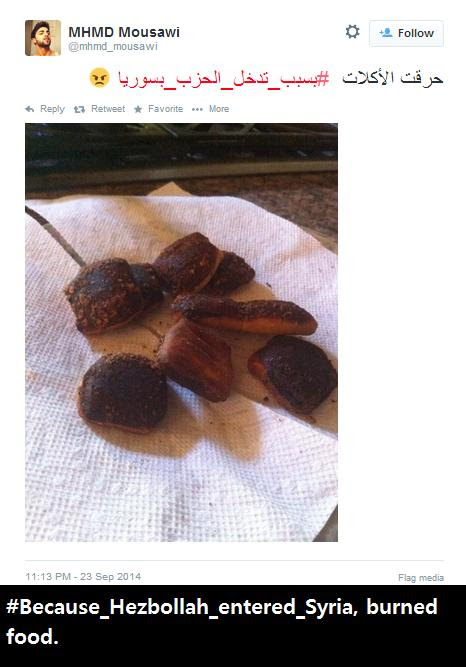 This last one is from a Saudi furniture store: 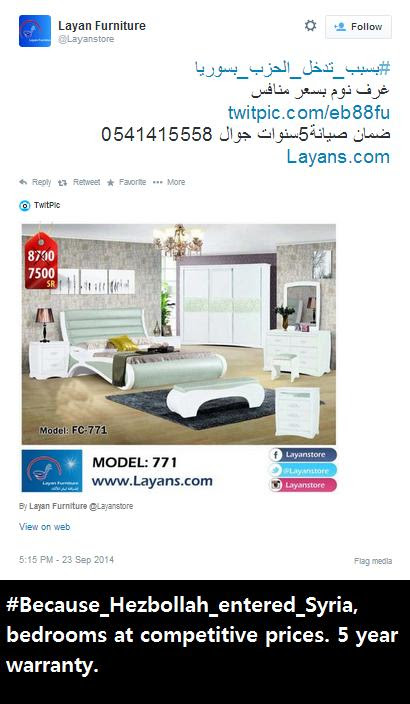 Posted by Michael Isenberg at 10:30 AM No comments:

Last night the United States and its coalition partners expanded their war against ISIS from Iraq into neighboring Syria, with an aerial attack that targeted both ISIS and the al-Qaeda-linked group Khorasan. The reaction from the Arab world is overwhelmingly negative, in spite of, or perhaps because of, participation by the governments of Bahrain, Qatar, Saudi Arabia, Jordan, and the United Arab Emirates. Here’s a sampling:

A number of tweeters observed that these attacks help a guy who we say we oppose. This tweet from “Urgent Arabia,” a news service that promises credible accounts of the Arab Street, is typical: 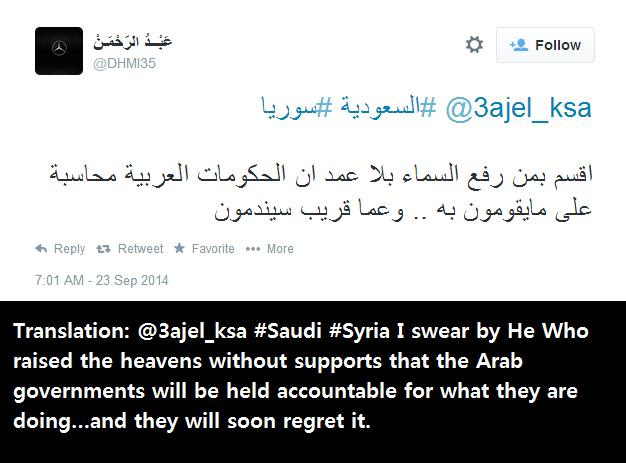 There are many attacks on the rulers of the coalition nations, such as this one from Qasim Yahya Khairuddin, whose about.me profile identifies him as a newscaster with the Palestinian al-Quds satellite channel in Beirut: 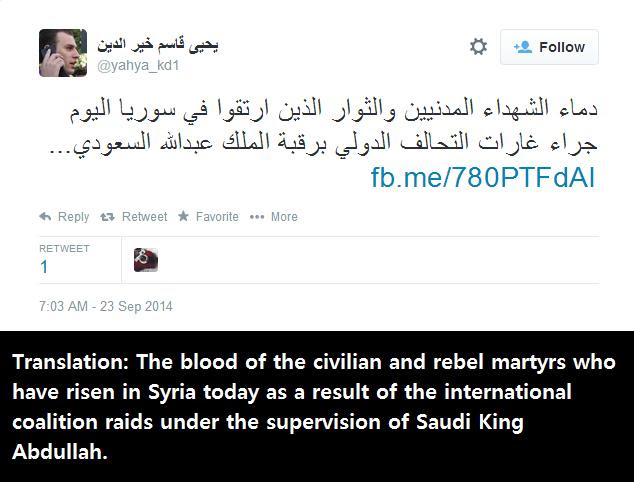 Dalaa al-Mufti, from Kuwait, is no friend of ISIS, but… 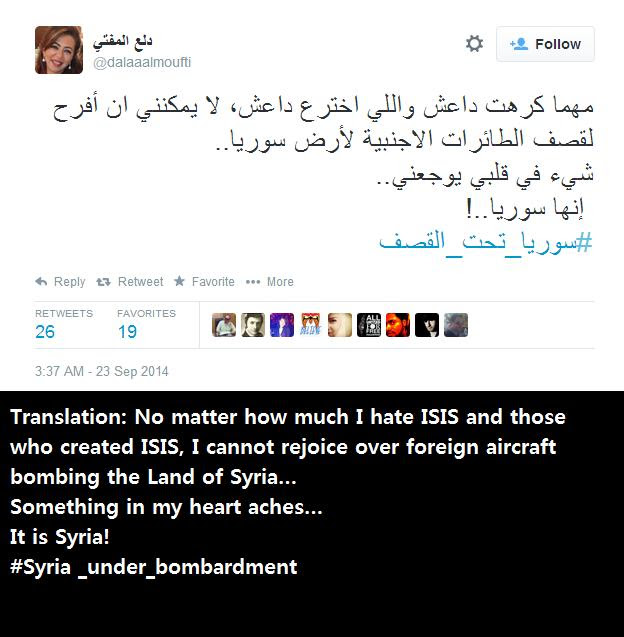 Finally, Joelle Achkar has this message for the coalition: 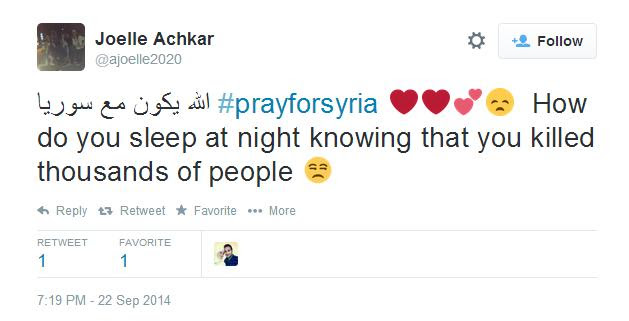 Posted by Michael Isenberg at 10:47 AM No comments:

Judging from today’s Twitter feed, the big story today in the Arab world is not the 130,000 refugees who crossed from Syria into Turkey over the weekend, the fall of the Yemeni prime minister in the wake of the occupation of government buildings by Shiite Houthi rebels, or even the Reuters story about the Mossad, the Israeli intelligence agency, advertising for spies on its website.

Instead, today is a day of celebration: Saudi National Day, the anniversary of the day in 1932 when Hejaz and Nejd merged to form the Kingdom of Saudi Arabia. This tweet from @abdulrahmanoham is typical: 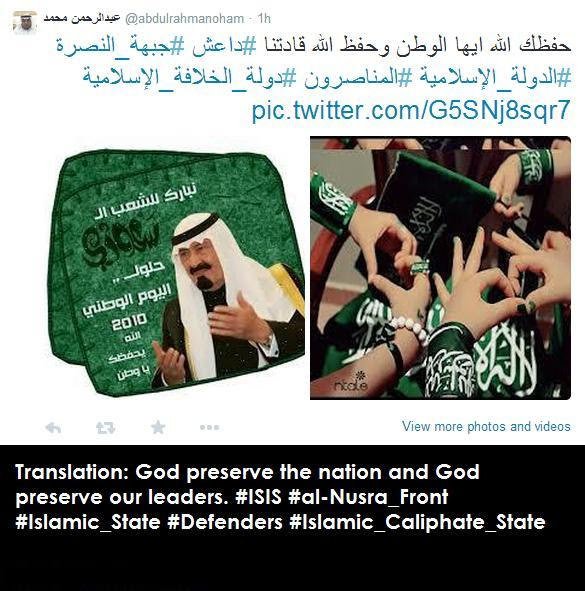 Note the hashtags. This is quite common: when I searched on the Arabic acronym for ISIS, I got a flood of National Day tweets. I’m not sure if the intent is to express solidarity with ISIS and al-Nusra, or defiance. The generally patriotic tone of the photos makes me suspect the latter.

@M__eh86 is dubious about the holiday. He writes. 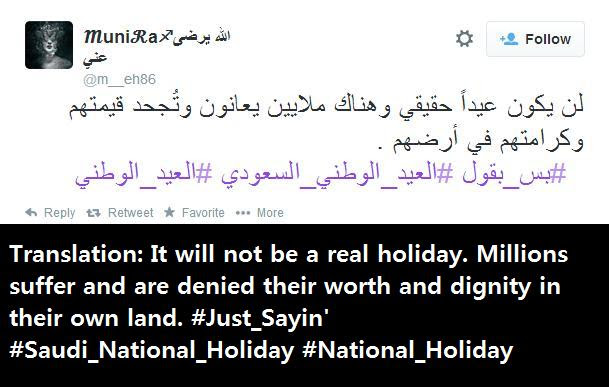 Some Arabs are using every weapon at their disposal to fight ISIS – including satire. 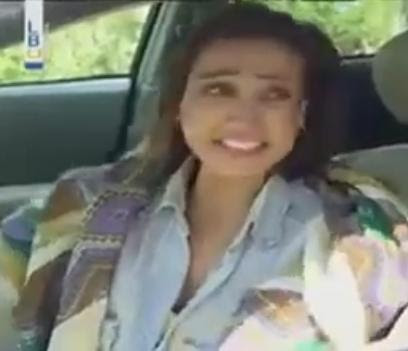 This skit from the Lebanese TV station LBC shows a woman driving a car (with Islamic State plates) when she is stopped at a Jihadi checkpoint. The sentry asks her if she’s a man or a woman (he’s not the sharpest scimitar in the armory). After she proves to his satisfaction that she’s a woman, he gets mad that she’s driving a car. But she tells him it’s ok – she’s driving a car bomb. The sentry apologizes. “The Caliph Abu Bakr Baghdadi says a woman may drive, but only a car bomb." I couldn’t make out his next words, but what happens after that requires no translation.

Note the station logo in the upper left. They turned the C in LBC on its side, turning it into the Arabic letter nun, to show solidarity with the Christians persecuted by ISIS.

Posted by Michael Isenberg at 8:47 AM No comments:

On a Facebook thread today, a friend asked, “Was Islam founded on war and forceful conversion?” Here’s my reply: 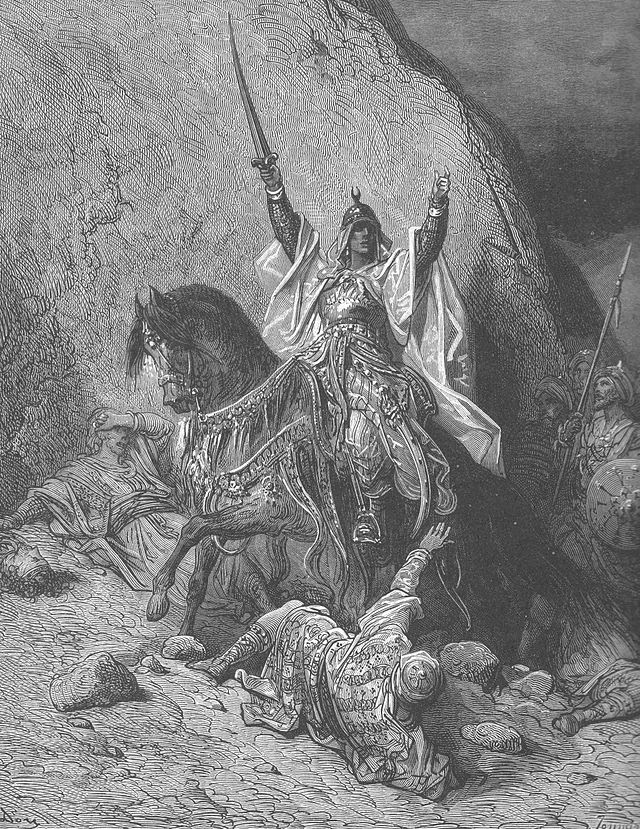 Islam was obviously founded on war: Muhammad's battles with the Quraysh are documented in the Quran, and after his death the Muslims burst the seams of Arabia and made war on the surrounding peoples.

However forced conversion, although it existed, was rare. For the first five centuries or so, with some exceptions, the Muslims didn't care that the Jews and Christians living among them were unbelievers, as long as they submitted to the government and paid the Jizya tax. Indeed, there is some evidence that in the early years, the intent was that the Muslims would be an elite warrior caste, living off everyone else. They'd just as soon the others remained unbelievers and continue paying the Jizya. There were even incidents of Jewish and Christian communities wanting to convert, and the Muslims not wanting them to.

Around 1100, things started to change - we see more of an effort to convert non-believers to Islam, but it was accomplished mainly by economic pressure and not the sword - they made it difficult to get a job if you weren't Muslim. There were incidents of forced conversion, such as when Alp Arslan and his son Malik Shah invaded Georgia, or among the Templars and Hospitallers that Saladin captured in the wake of the Battle of Hattin (1187). Many refused and a massacre followed. But like I said, these were the exception rather than the rule.

Posted by Michael Isenberg at 12:16 PM No comments:

Today is September 11 and I hope everyone has had a chance to take a moment and remember the victims of that horrible day 13 years ago.

I was curious what they were saying in the Arab world, so I went to Twitter and searched on “September 11” in Arabic. I expected to find a mixed bag – some tweets celebrating the attack and expressing solidarity with Osama bin Laden, others condemning it and expressing solidarity with America. So it surprised me that what I found was overwhelmingly the former: anti-American, pro-terrorist, and pro-hatred.

@jijbnt, who calls himself "We are all Osama", describes the image of the plane crashing into the second tower as "a beautiful memory": 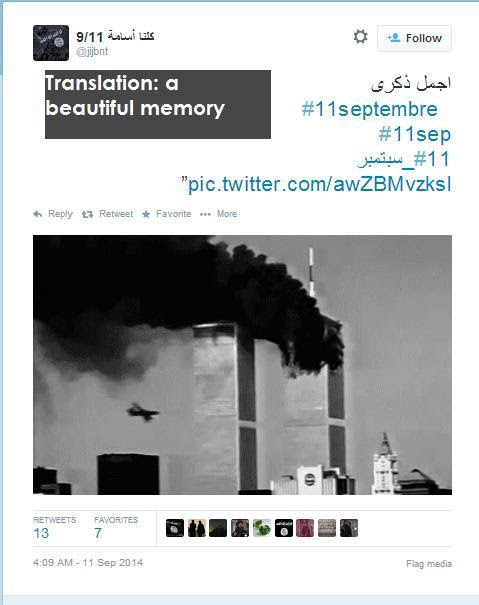 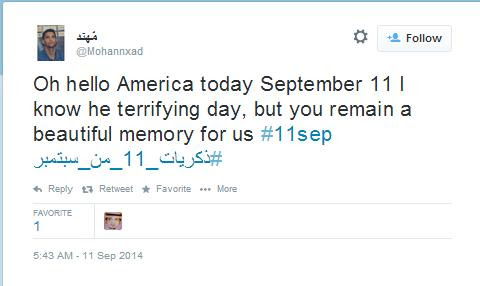 Persho from Egypt sends his love: 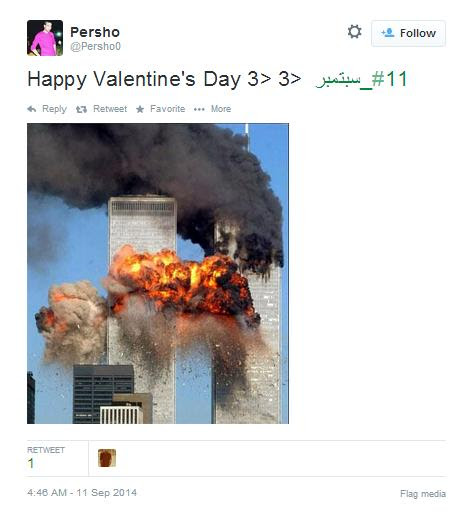 Algelaud Hussein, whose profile says he dreams of being a pilot, tweets: 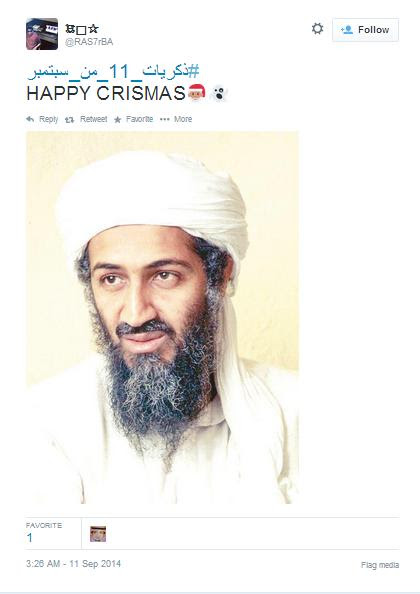 Abdullah al-Ali from Kuwait, who runs an IT security firm, accuses President Obama of secretly planning an Arab holocaust. 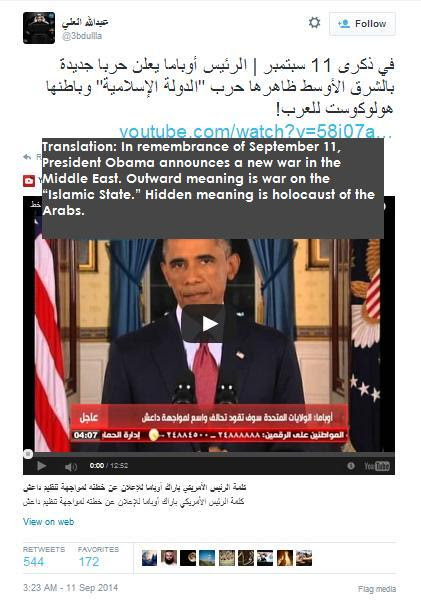 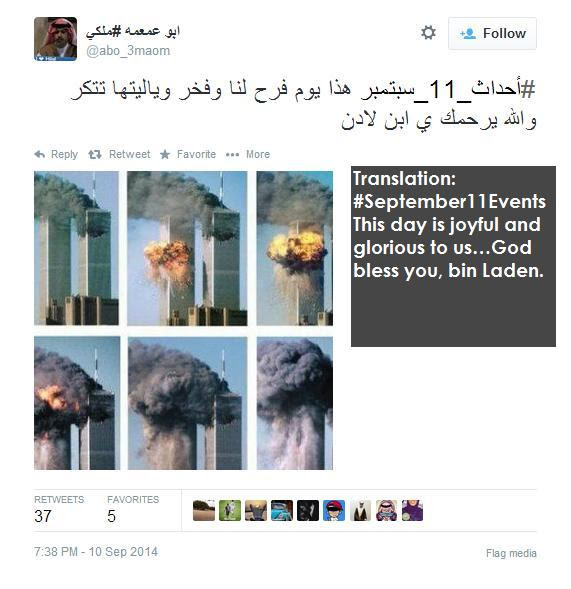 @7AZ1M accuses the American military of killing millions of Iraqi and Afghan children:

Not sure what khabor is, but eating it doesn’t sound like a good thing.

Of course no September 11 post is complete without the obligatory Truther: 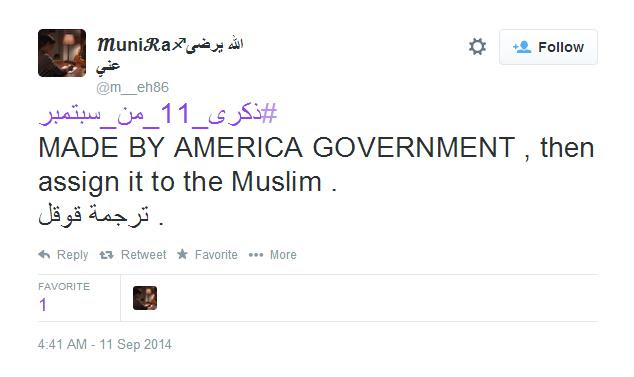 I really did set out to write a balanced piece and make today a day about healing, but all I found on Twitter was extremism. We keep hearing about moderate Muslims, but they weren't speaking up today. If any of my Arabic-reading friends come across their tweets, tweets that condemn the attacks and are sympathetic to the victims, please comment with links, and I'll pull them together in a future entry.