The Rohingya Persecution: a Primer 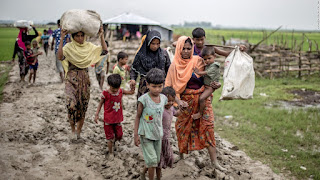 If you’ve been on social media lately, you've probably seen references to the Rohingya people being persecuted by the government of Myanmar (Burma). Words like “ethnic cleansing” and “genocide” appear. But, what with DACA, Hurricane Irma, and the Hillary excuses tour, the story has not gotten as much attention as it should. And it should get attention—horrible things are going on, and people need to know about them. 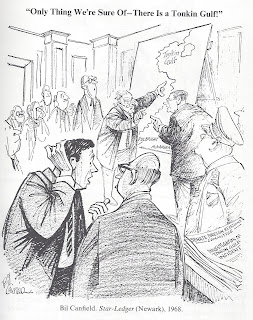 Granted, figuring out just what is going on is no small task. The situation reminds me of the debate back in the 60s over the Gulf of Tonkin incident, the naval battle that led to escalation of US involvement in Vietnam. A cartoon at the time depicted angry government officials standing in front of a map and pointing at each other accusingly. Scratching his head, an honest but puzzled onlooker says, “Only thing we’re sure of—there is a Tonkin Gulf!”

Similarly, it seems like the only thing we’re sure of regarding the violence in Myanmar—there is a Myanmar.

Charges and counter-charges fly back and forth between the Rohingya and the government. All the tools of modern disinformation are in play—evasive statements by government officials, accusations of “fake news,” photographic “evidence” of atrocities that turn out to be pictures of some other atrocity in some other country, and a general willingness of both sides to believe even the most absurd accusations about the other, while dismissing any criticism of itself. To complicate things, the press is not able to operate freely in Myanmar, especially in Rakhine State, where the Rohingya live. News about Rakhine must be cleared by government censors.

In any case, despite these obstacles, here’s what I’ve been able to piece together:

Who are the Rohingya? 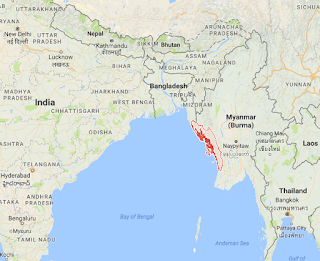 The Rohingya are Muslims of Indian origin living in northern Rakhine, on the coast of the Bay of Bengal, near the Bangladeshi border. The government claims they are recent arrivals, fleeing crowded conditions in Bangladesh. The Rohingya claim they have been there for 1,000 years, the descendants of Arab seafarers. The truth is somewhere in between. Muslims have lived in the region since at least the 1430s—the Santikan Mosque in Mrauk U dates from that era. The term “Rooinga” appears in a British article from 1799, “Burma Empire” by Francis Buchanan-Hamilton.

Migration of Indian Muslims into the region accelerated during the colonial era; the British brought them in for agricultural labor.

World War II saw violence between the Rohingya, who allied with the British, and the Rakhine, who were sympathetic to the Japanese. Thousands died on both sides.

As the war ended and Myanmar achieved its independence, there was division among the Rohingya as to their future. Some wanted to join Pakistan, but that was rejected by that nation’s founder, Muhammad Ali Jinnah. Others formed separatist groups to fight for independence—and these groups persist to this day. Still others integrated into Burmese society—at least one became a member of parliament.

The number of Rohingya in Rakhine is unknown. There hasn’t been a census since 1983. At that time, there were 585,000 Muslims living in the state, 29% of the population. Estimates of the Rohingya population on the eve of the current round of violence is somewhere around a million.

How do the Burmese view the Rohingya?

With hatred. Many Burmese Buddhists dislike Muslims in general and the Rohingya in particular. Just as some of my right-of-center friends believe that hordes of Muslims are migrating illegally into Europe in order to take over that continent for Islam, many Burmese believe Muslims are attempting to do the same thing in Rakhine. There is little solid evidence for this; the only migration that’s been significantly documented is the flow of refugees going the other way.

The New York Times reports, “In online forums, Rohingya are referred to as dogs, thieves, terrorists and various expletives. Commenters urge the government to ‘make them disappear’ and seem particularly enraged that Western countries and the United Nations are highlighting their plight.” Although Buddhist monks are generally thought of as exemplars of peace, when it comes to despising the Rohingya, some of them are leading the charge. Notable among these is Ashin Wirathu, who Time magazine called “The Face of Buddhist Terror.”

Is this the first outbreak of persecution against the Rohingya?

No. In 1962, a military junta overthrew the government of Myanmar, ushering in decades of autocratic rule under which the Rohingya suffered greatly. Some argue the junta needed the Rohingya to justify their own dictatorship. A 1982 nationality law stripped the Rohingya of citizenship; legally they are now stateless persons. Periodic waves of violence crashed down on them. In Operation King Dragon (1978), the military conducted mass arrests and torture under the pretext of cracking down on jihadists. Amnesty International reported that in 1991-1992, there were “massive human rights violations in the Rakhine State, including extrajudicial executions, torture, forced labour and portering.” The persecution persisted even after the end of military rule in 2011. In 2012, riots broke out in the wake of questionable accusations that three Rohingya youth had raped and murdered a Rakhine woman.

What sparked the current outbreak?

Jihadist separatist groups meanwhile continued their loathsome campaign of violence in Rakhine. One of these is the Arakan Rohingya Salvation Army (ARSA), under the leadership of Ata Ullah, a Pakistan-native, of Rohingya descent, who grew up and was educated in an “Islamic school” in Saudi Arabia (Why is it always Saudi Arabia?). Last October, an attack on Burmese border posts along the Bangladesh border killed nine government officials. A second round, on August 25 of this year, left seventy-one dead. ARSA has claimed responsibility for both of these attacks.

The military struck back. As it should; ARSA really is a dangerous jihadist group. But to the military's eternal shame, the scope of its counterattack went far, far beyond jihadists. The latest (Sept 15) report from Human Rights Watch states, based on satellite data and eyewitness reports, that the Burmese military has burned 62 Rohingya villages near the Bangladesh border. Huge numbers of Rohingya have fled in their wake. CNN reports that a mind-boggling 370,000 refugees have fled to Bangladesh in a three week period.

The refugees offer harrowing accounts of attacks by the military and its allies on women, children, and the elderly—a chilling demonstration of the end game of identity politics. This is what happens when people look on each other as members of groups rather than as individuals. Among these accounts is that of Ali Omar, of Whykhong, who witnessed the burning of a neighboring village:

Ali Omar’s experience is just one of scores. You can read more in the September 8 report from Human Rights Watch.

What does the Burmese government say?

So far, very little. A statement from the foreign ministry blames everything on ARSA, and assures a concerned world that, “The security forces have been instructed to...exercise all due restraint, and to take full measures to avoid collateral damage and the harming of innocent civilians in the course of carrying out their legitimate duty to restore stability.”

In the absence of any acceptance of responsibility by the government, all eyes have turned to Aung San Suu Kyi, holder of the Nobel Peace Prize and de facto leader of Myanmar. Many expected her to be sympathetic to the plight of the Rohingya; after all, Ms. Suu Kyi herself was for decades under house arrest at the hands of the military. But for some years now, she’s been evasive about Rakhine, employing the “both sides” argument. That satisfied her critics as much as President Trump's critics were satisfied by his use of the same tactic in the wake of Charlottesville.

The Washington Post attributes her reticence to a number of factors including party politics, other priorities (the economy and insurgencies in other parts of the country), the need to accommodate a still powerful military, and just plain stubbornness.

But with the recent attention, perhaps she is reconsidering. A spokesman for Ms. Suu Kyi announced that she will deliver an address on the situation this week. The world will be watching.

Michael Isenberg writes about the Muslim world, medieval and modern. His forthcoming novel, The Thread of Reason, is a murder mystery that takes place in Baghdad in the year 1092. It depicts the war for the Muslim soul between those who seek to enforce shari’a strictly, persecute Jews and Christians, and stamp out "un-Islamic" science, and those who wink at a few sins, tolerate their non-Muslim neighbors, and write science books instead of burning them.

Posted by Michael Isenberg at 4:35 PM