Behind the Trump/Rouhani war of words.
by Michael Isenberg. 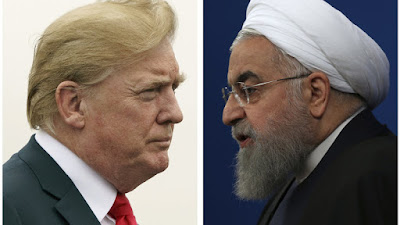 "NEVER, EVER THREATEN THE UNITED STATES AGAIN OR YOU WILL SUFFER CONSEQUENCES THE LIKES OF WHICH FEW THROUGHOUT HISTORY HAVE EVER SUFFERED BEFORE." 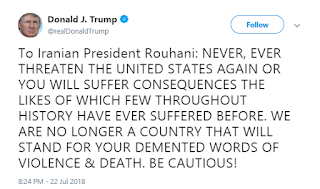 So declared President Trump last night in what the interwebz has dubbed "The Mother of all Tweets." His words, rendered in all caps, were in response to a speech that Iranian President Hassan Rouhani delivered earlier in the day to a gathering of Iranian diplomats. Rouhani’s remark that “Americans must [understand] that peace with Iran [is] the mother of all peace, war with Iran the mother of all wars” was the most widely reported excerpt from the speech, but it was just the tip of the iceberg. More extensive quotes, appearing on President Rouhani’s website (sadly, there isn’t a full transcript) reveal a bellicose and paranoid rant against the United States, President Trump, and the State of Israel. In addition to outlining five “conspiracies” by the United States against the Iranian people, President Rouhani said,

The last three quotes are particularly troubling because they express Iran’s ambitions to be the dominant power in the region and they repeat a threat that President Rouhani made earlier this month to close the Straits of Hormuz to international shipping if the Trump administration proceeds with its plans to re-impose nuclear sanctions on Iran. That threat was seconded by Supreme Leader Ayatollah Khamanei at the gathering of diplomats this weekend.

Rouhani’s speech was not delivered in a vacuum. The Iranian regime faces serious domestic problems, specifically a weakening economy and popular protest against the regime’s hardline enforcement of Islamic law, especially its restrictions on women’s dress and behavior.

The economy was a major issue in the May 2017 Iranian presidential election. Iran had suffered many years of economic stagnation—the BBC reported “Iran’s economy had been close to collapse”—thanks to western sanctions. But with the signing of the nuclear deal in 2015, formally known as the Joint Comprehensive Plan of Action or JCPOA, sanctions were lifted, and by the time of the election the economy was enjoying 7% growth. However, despite an expanding GDP, double digit unemployment lingered. President Rouhani’s election opponent, Ibrahim Raisi, hammered the incumbent for relying too heavily on foreign investment, especially western investment.

The Iranian people decided they were satisfied with President Rouhani—they handed him a 57%-39% victory over Raisi—but their satisfaction did not last long. Protests over high prices in Mashhad during the New Year’s weekend received international attention and spread to several other cities before they were violently stamped out by authorities. Since then the economic situation has deteriorated considerably. In anticipation of President Trump’s withdrawal from the JCPOA and the re-imposition of US sanctions, which he formally announced May 8, the Iranian rial has collapsed against the dollar. Prices of foreign goods have skyrocketed. In Teheran last month, shopkeepers in the Grand Bazaar closed their doors in protest, and thousands of demonstrators attempted to march to Parliament until they were dispersed by riot police. 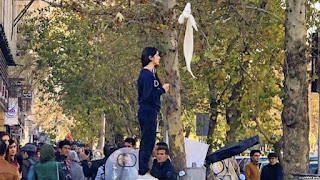 But not all protests in Iran are economic. When Vida Movahedi removed her hijab at a demonstration on Revolution Street in Teheran in December, she inspired women all over Iran to defy the country’s strict dress code. But she is merely the most visible symbol that Iranian women are fed up with theocracy. In recent months, they have proven themselves ingenious at devising a thousand small acts of defiance. Whether by going out hijab-less, dancing in public (sometimes with men, sometimes by themselves), or disguising themselves as men to sneak into soccer games, they have, little by little, cracked the façade of fundamentalism.

There is no doubt that the economic and social protests were on President Rouhani’s mind when he addressed the gathering of diplomats yesterday. He alluded to the government’s responsibility “to pave the way for private sector's activity in the country.” And he attempted to discredit the protests by blaming them on the United States. “You can't incite Iranian people against Iran's security and interests.” I find it likely that this is the real motive for Rouhani’s attacks—to distract the Iranian people from domestic problems by drawing their attention to international ones. To wag the dog.

If that is the case, then President Trump—who has domestic problems of his own—played into President Rouhani’s hands by responding the way he did. Still, I’m not sure he had a lot of choice. The threats to the Straits of Hormuz need to be taken seriously and couldn’t go unanswered. It will be interesting to see, in the weeks ahead, whether the hard line he has taken will cause Iran, like most bullies, to back down. As a number of commentators have pointed out, a similar tack brought North Korea to the negotiating table—albeit how those negotiations will play out is anybody’s guess at this point. When it comes to Twitter diplomacy, we’re all still learning.

Posted by Michael Isenberg at 9:41 AM No comments: 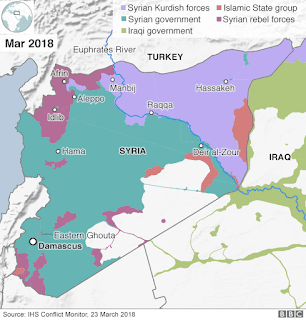 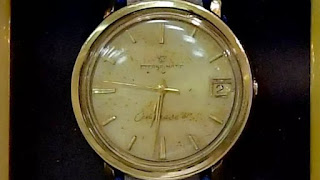 Posted by Michael Isenberg at 12:36 PM No comments: