by Michael Isenberg. The war in Syria dominated the news from the Middle East this week. Government forces continued to make gains in the Eastern Ghouta region. 70% of the district, on the outskirts of Damascus, has now fallen into the hands of the Assad regime. The area had been under rebel control since 2013. 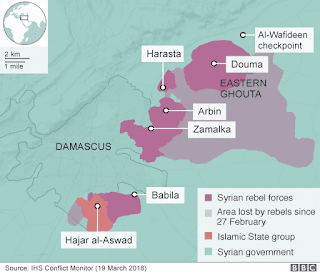 The operation by the Assad regime and its Russian ally has been brutal. The BBC reports more than 1,400 civilians have been killed. Among these, fifteen children and two women died in an underground school that was struck by Russian missiles.

With the capture of Eastern Ghouta, the Syria War is in its end game and, sadly, it's an Assad victory. Not that the other options were great. But at least the destruction will stop soon.

Separately, in the north of the country, Free Syrian Army forces, backed by Turkey, have taken control the Kurdish town of Afrin. The Turkish government claims that the Kurdish People’s Protection Units (YPG), which controlled the area, is part of the Kurdistan Worker’s Party (PKK), a rebel group within Turkey which the government considers a terrorist organization. The US disputes the claim that the groups are in cahoots. Turkish president Recep Erdogan intends to create a buffer zone in northern Syria along the Turkish border. “The military operation will go on until the terror corridor through Manbij, Ain al-Arab, Tal Abyad, Ras al-Ain, Qamishli has been wiped out,” he said.

The Trump Administration has done little to protect the Kurds from Turkish aggression. Given that the Kurds allied with the United States in the battle against ISIS, and fought in the front lines, it is shameful that we are not doing more to help them. That may change, however, as American troops are stationed in some of the towns threatened by Erdogan.

There were reports of looting by the rebel forces. According to the BBC, “AFP news agency journalists in Afrin also saw rebels break into shops, restaurants, and houses, and leave with food, electronic equipment, blankets and other goods.” And we thought the Free Syrian Army were the good guys.

Also related to Syria, the Israeli government this week declassified video and other documents concerning its bombing of a suspected Syrian nuclear reactor in 2007. This is the first public admission by the Jewish state that it was behind the destruction of the facility. Pundits believe the timing of the release is intended as a warning to Iran that Israel will respond similarly to Iran's nuclear ambitions. Indeed a tweet from Prime Minister Netanyahu, that “Israel's policy was and remains consistent - to prevent our enemies from arming themselves with nuclear weapons,” seems to confirm that interpretation. 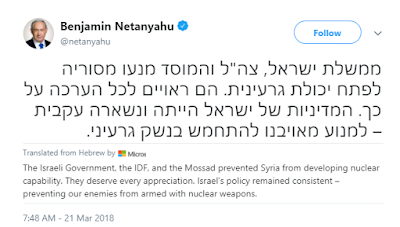 In a plea deal, an Israeli military court sentenced 17-year old Ahed Tamimi to eight months in prison. You may recall Ms. Tamimi as the Palestinian teen who was pictured in a viral video slapping an Israel soldier.

In my humble opinion, Israel made a mistake in prosecuting Tamimi. The video was a propaganda victory for the Jewish state, showing Israeli restraint in the face of Palestinian provocation. By imprisoning Tamimi, Israel is turning victory into defeat by creating a martyr for the Palestinian cause.

Michael Isenberg drinks bourbon and writes novels. His latest book, The Thread of Reason, is a murder mystery that takes place in Baghdad in the year 1092, and tells the story of the conflict between science and shari’ah in medieval Islam. Check it out on Amazon.com.

Posted by Michael Isenberg at 3:10 PM No comments:

The Murder that Started it All

The History behind The Thread of Reason

Let me start by expressing my appreciation to everyone who participated in yesterday’s launch of my novel, The Thread of Reason. Thank you from the bottom of my heart. 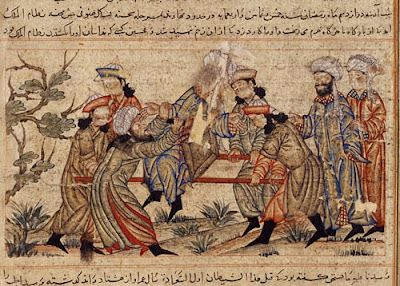 The Thread of Reason is a mystery concerning the assassination of Nizam al-Mulk, who was the vizier (prime minister) of the Seljuq Empire, which stretched from the Mediterranean to the borders of India. He served the sultans Alp Arslan and Malik-shah. According to some accounts, Malik-shah had little interest in anything other than hunting and war, which left Nizam al-Mulk with the power and responsibility of day-to-day governing. His assassination was widely reported in the chronicles of the time (or near the time, anyway). For example, here’s what Al-Kamil fi’l-Tarikh (The Complete History) by Izz ad-Din ibn al-Athir (1160-1232/33) had to say,

The killing of the assassin on the spot is what makes the murder such a ripe subject for a mystery novel: no one had the opportunity to question him and learn who, if anyone, he was working for. Historians have pondered this mystery for centuries, but as far as I know, the solution I came up with in The Thread of Reason is completely original. Check it out on Amazon.com.

Michael Isenberg drinks bourbon and writes novels. His latest book, The Thread of Reason, is a murder mystery that takes place in Baghdad in the year 1092, and tells the story of the conflict between science and shari’ah in medieval Islam. 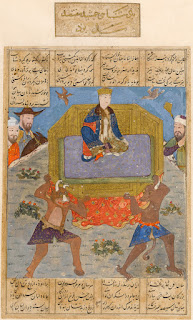 Tomorrow marks Nowruz, the Persian New Year, so it seemed like a good time to put together a few notes on the history of the holiday. Its celebration goes back some 3,000 years, its origins lost in the mists of time.

I suppose the version which attributes it to the mythical king Jamshid is as good as any. A Promethean figure, legend tells us Jamshid blessed humankind with metalworking, textiles, bricklaying, mining, perfume, medicine, shipbuilding, and (on the downside) the caste system. Then, according to Abu’l-Qasim Ferdowsi’s epic poem, the Shah-nameh (The Book of Kings, ca. 1000 AD),

(The Shah-nameh is a fascinating work in its own right. One of these days I’ll have to post an entry about it).

In any case, over time the Persian calendar drifted out of synch with the seasons, just like the Julian calendar that was used in the west. There was need of someone like Pope Gregory to institute reforms. In his Al-Kamil fi’l-Tarikh (Complete History), the historian ibn al-Athir (1160-1232/33) tells us,

The leader of the team, “Umar ibn Ibrahim al-Khayyami,” is of course Omar Khayyam, known in the west as the poet who composed the Rubaiyat (And who’s also the hero of my new novel, The Thread of Reason, which, in honor of his calendar, launches tomorrow on Amazon.com!) Omar’s calendar, called the Jalali calendar, after one of the titles of Malikshah, is, with some modifications, still in use in Iran today. It is accurate to one day every 5,000 years—beating out the Gregorian calendar, which is “only” accurate to one day every 3,000 years.

So best wishes for a happy Nowruz. Celebrate with wine and musicians. I’ll leave you with some of the latter—some traditional Persian music. This is a recording I made on Saturday, at the Boston Museum of Fine Art’s annual Nowruz celebration. The violin-like instrument that Mr. Dehghan is playing is called a kamancheh. Descriptions of them are found as early as the il-Khanid (Mongol) dynasty (13th-14th century).

Michael Isenberg writes about the Muslim world, medieval and modern. His forthcoming novel, The Thread of Reason, is a murder mystery that takes place in Baghdad in the year 1092.

*-The royal farr is the power that God bestows upon a king, provided he’s worthy. It’s something like a cross between magic, glory, luck, and the Mandate of Heaven.

The quotation from Ferdowsi comes from

Posted by Michael Isenberg at 10:25 AM No comments: