Women to drive in Saudi Arabia

The Kingdom of Saudi Arabia—notorious for its restrictions on the freedom of women—announced a historic change on Tuesday: starting next June, the gentle sex will be allowed to drive.

Around the kingdom, and around the world, women took to Twitter to celebrate. 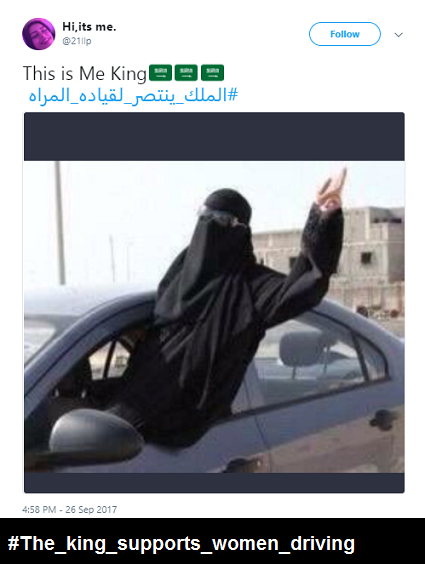 A bunch of people posted this awesome video: 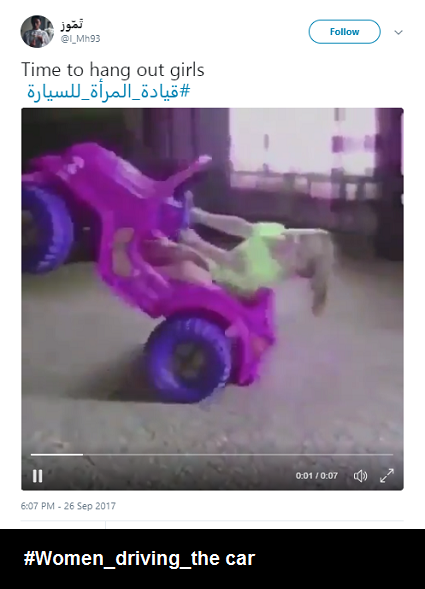 Some speculated what the roads would be like in a kingdom where segregation of the sexes was still the law of the land: 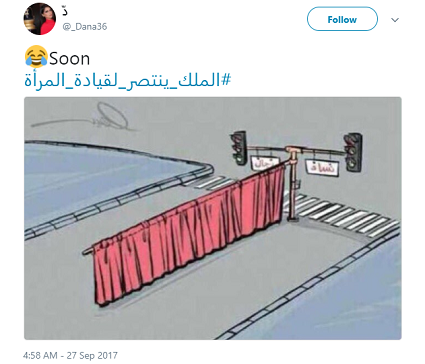 Others wondered, now that women were mobile, why the hell they’d stay in Saudi Arabia: 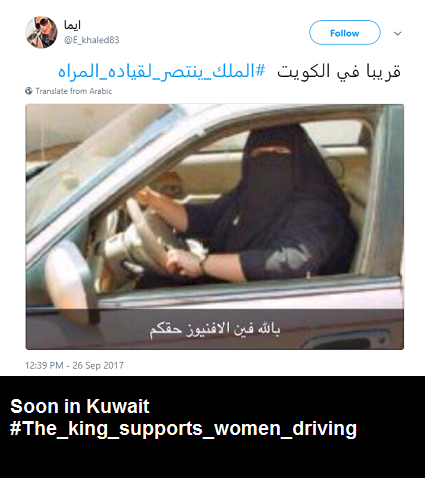 Of course, social conservatives were unhappy, and announced their intention to put their foot down where their own wives and daughters were concerned. And so, #The_harem_of_my_house_won’t_drive hashtag was born. 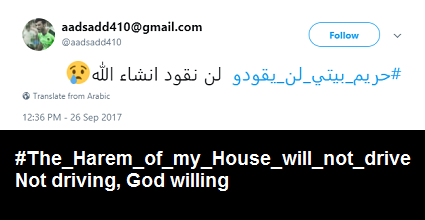 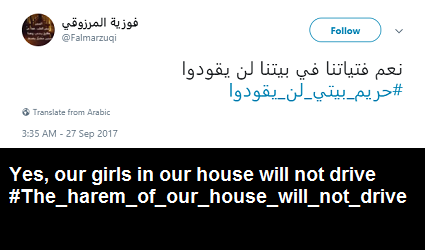 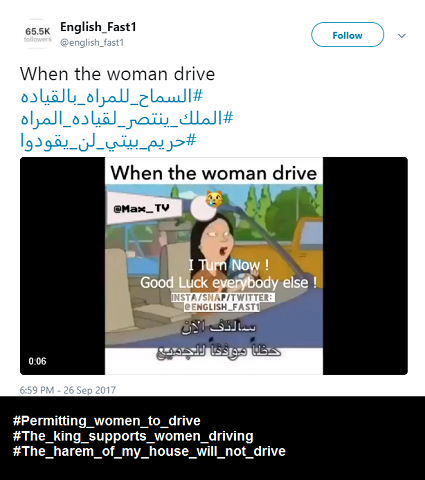 But such tweets soon became hard to find as harem_of_my_house was hashjacked by the forces of modernity:

I’m uncertain whether the gratitude to “Uncle Trump” was sincere or sarcastic.

I had a little trouble with the translation on this one:

I did okay with the first line, “#The_harem_of_my_house_will_not_drive Harem?! Hahahahahahaha.” But, stuck on the second line, I tweeted the author and asked her what it meant. Her reply:

I’m not sure if that’s the actual translation, or she was merely giving me advice :-)

Many took the trouble to thank the king for his decree: 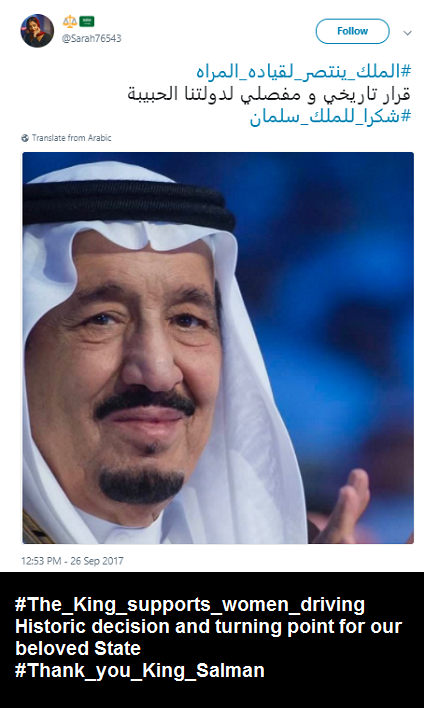 But as my friend Ammar Anwer pointed out, the real heroes, “are the brave Secular activists, who are either put behind bars, like Raif Badawi, or compelled to leave the country for their own safety. It is a moment to congratulate them, not the totalitarian Extremist dynasty.”

You may recall Raif Badawi; I wrote about him previously. Mr. Badawi is a blogger who was sentenced to 10 years in prison and a thousand lashes (he’s received 50 so far) for “insulting Islam.” The last I heard, his wife had had no word from him for over a year. Needless to say, he’s been unable to comment on Tuesday’s news. But the Raif Badawi Foundation tweeted on his behalf: 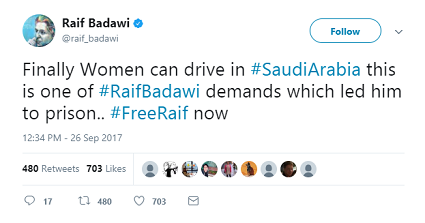 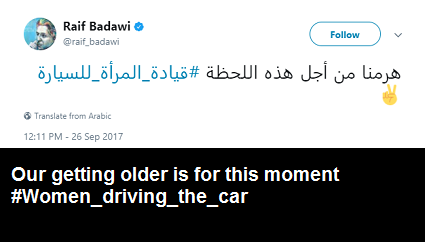 Among the activists who have been driven out of the country is Manal al-Sharif. In 2011, Ms. Sharif posted video of herself driving. She was arrested, lost custody of her son, and was publicly shamed. During a sermon at a mosque—with her father in the congregation—the imam called her a whore. She now lives in Australia but says she looks forward to driving in her home country. She posted this cartoon about what would happen to all the men, many of them foreign, who are currently employed as chauffeurs for the women of Saudi Arabia: 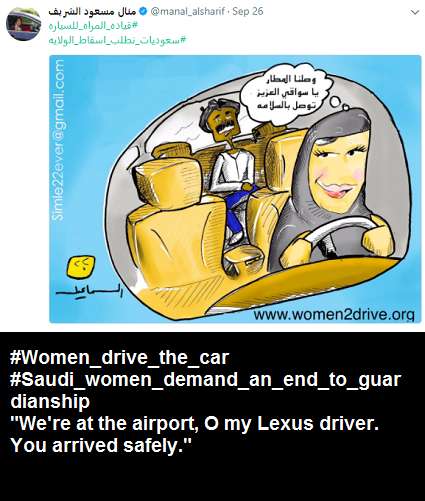 On a more serious note, Ms. Sharif pointed out that the women of Saudi Arabia still have a long way to go. In particular, the “guardianship” laws are still in place. According to the BBC, under these laws,

So Ms. Sharif and her allies have their work cut out for them.

One of those allies, who I also wrote about previously is Loujain Hathloul. Like Ms. Sharif, she was arrested—and held for two and half months without charges—for posting video of herself driving. Her response to Tuesday’s news was eloquent and succinct: 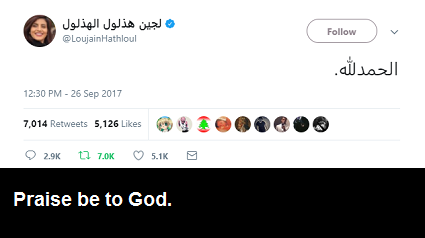 Michael Isenberg writes about the Muslim world, medieval and modern. His forthcoming novel, The Thread of Reason, is a murder mystery that takes place in Baghdad in the year 1092. It depicts the war for the Muslim soul between those who seek to enforce shari’a strictly, persecute Jews and Christians, and stamp out "un-Islamic" science, and those who wink at a few sins, tolerate their non-Muslim neighbors, and write books about science instead of burning them.

Posted by Michael Isenberg at 11:59 AM