The Source of Incalculable Danger in Respect of Hereafter

Did Muslims drink wine in the Middle Ages?
Part III—The Islamists Strike Back.
by Michael Isenberg.

As I wrote in Parts I and II of this series on Islam and drinking, readers of my historical murder mystery, The Thread of Reason are often surprised at how much wine the Muslim characters in the book guzzle down. “Isn’t alcohol forbidden is Islam?” they ask.

In no uncertain terms. But despite the ban, plenty of drinking went on. We know that from the historical chronicles of the time, which tells us of some wild parties in the royal palaces. Perhaps even more significantly, we know that from literature like the Maqamat of Qasim Hariri and The Thousand and One Nights, often a better source on daily life than the histories. The histories give us portraits of sultans and caliphs, and idealized portraits at that. The storybooks tell us about the lives of ordinary people.

Although drinking was widespread, there were plenty of orthodox Muslims, True Believers, who were unhappy about the situation. And they struck back. In 1092, when my book takes place, their undisputed leader was Abu Hamid Ghazali, head of the school of shari’ah (Muslim law) in Baghdad known as the Nizamiyya. Three years later, he suffered a nervous breakdown, left the Nizamiyya and wandered around Syria, Palestine, Egypt, and Arabia as a pilgrim and student of mysticism. When he returned to his native land of Persia, ten years later, he seems to have become a bit of crank. He spent a great deal of time writing books and letters of helpful advice to the rulers of the land, some solicited, some not. He was especially big on nagging them to repent their sins. And high on his list of sins requiring repentance was drinking.

Drinking comes up, for example, in Ghazali’s Book of Counsel for Kings (Nassihat al-Muluk), which was written at the request of the Sultan Sanjar, son of the great Malk-shah. In it, Ghazali condemns “continual backgammon-playing, chess-playing, wine-drinking, ball games and hunting,” as they “do not befit the king because they distract.”

A letter to one Mu’in al-Mulk was even more explicit. I haven’t found out anything about this individual elsewhere, but the title ending in “al-Mulk” indicates that he was a vizier—prime minister to a ruler. “May Mu’inul Mulk be warned against what one of his friends has told me these days,” Ghazali wrote.

I’m not sure how much influence Ghazali had on the vizier Mu’in al-Mulk or the sultan Sanjar (albeit I can’t help noticing that in this picture of Sanjar, from a 14th century illuminated manuscript, he's holding what appears to be a wine goblet). 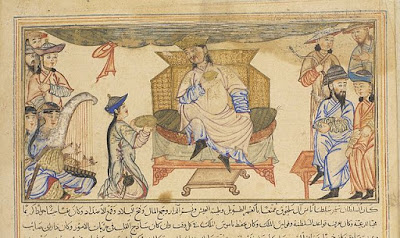 But there is no doubt that Ghazali’s influence on succeeding generations, both on the subject of drinking and in many other areas, was immense. In the century that followed, the Muslim world saw a crackdown on the enforcement of shari’ah, as a new generation of rulers came to power who not only didn’t drink themselves, but were determined that there would be no drinking in their domains.

For example, the chronicle of ibn al-Athir tell us that a year into the reign of the caliph an-Nasir, who ascended to the throne in 1180, “there was much sinful behavior in Baghdad. The palace chamberlain set up a group to pour away intoxicating drinks and to arrest loose women.” (The Chronicle of Ibn al-Athir for the Crusading Period from al-Kamil fi’l-ta’rikh, D.S. Richards, tr., 2006-2008).

An-Nasir got along very badly with Saladin, the sultan known to us in the west as the gentlemen who treated his enemy Richard the Lion-Hearted so chivalrously. But Saladin was also a dyed-in-the-wool jihadist and there was one thing at least that he and an-Nasir agreed on. Two years after an-Nasir’s crackdown on alcohol in Baghdad, Saladin’s government issued a diploma appointing a market official, called a muhtasib, in Aleppo. The diploma enjoined the muhtasib to enforce regulations on weights and measures and hygiene, prohibit usury, evict magicians and fortune tellers, prevent nudity in the public baths, and “as regards intoxicating beverages, let him seek them out and spill them on the ground, and let him apply the legal punishment to anyone who has drunk of them, as soon as the guilty party has regained his sobriety.” (Anne-Marie Edde, Saladin, 2011) The legal punishment was eighty lashes with a palm switch.

In the final installment of this series, I will take a look at a sometime friend of Ghazali, Omar Khayyam. In his collection of poems known as the Rubaiyat, there are numerous verses about wine, which begs a question that has been a source of debate among historians and biographers since he drew his final breath: did Omar drink it himself.

Posted by Michael Isenberg at 4:03 PM

Email ThisBlogThis!Share to TwitterShare to FacebookShare to Pinterest
Labels: Drinking in Islam, Ghazali, Islam, Islam in the Middle Ages, Saladin