CONTAINS SPOILERS FOR THE THREAD OF REASON.

In my novel The Thread of Reason, I describe an altercation in a Baghdad marketplace between a Jewish official and a rug seller. The incident is a true story, and it offers us a view into the highest level politics among the Muslims of the time, and the lot of Jews and Christians living among them.

The imbroglio came amid deep-seated political tension between the caliph and his vizier (prime minister) Abu Shuja on the one hand, and the sultan and his vizier Nizam al-Mulk, on the other. Technically, the caliph is head of the Muslim religion, the “Commander of the Faithful,” and the sultan is merely his servant. But as we see in this account by the historian ibn al-Athir (1160-1233), the incident in the market not only led to dire consequences, but revealed where the true power lay:

In addition to the visibility it gives us into the politics of the sultan and the caliph—and the attempts by the sultan to control the caliph by controlling his vizier—the incident illustrates the precarious position occupied by dhimmis—Jews and Christians—living in the medieval Muslim world. They could reach quite high stations in society—as ibn Samha had. But, as the passage shows, this fostered resentment in ordinary Muslims, and further the Jews and Christians were subject to “what the Commander of the Faithful Umar ibn al-Khattab had stipulated for them” centuries before, often called the “Ordinance of Omar.” The requirement to wear “distinctive dress”—typically a red or yellow cord worn on the shoulder by Jews and a special belt and a cross around the neck for Christians—was just the tip of the iceberg. Jews and Christians could not build their homes or houses of worship higher than the Muslim buildings. They were prohibited from riding horses, and they could ride a donkey only if they used a wooden saddle. They were required to make way for a Muslim if they were to meet him on the road, and were banned from ringing church bells or otherwise making noise during their religious ceremonies.

Further, they were subject to the jizyah—an annual head tax of three to five gold dinars, not a huge sum, but out of reach of the poorest members of society. According to the law, the jizyah had to be paid in person and the official collecting it was supposed to hit the dhimmi below the ear; it wasn’t enough that the dhimmi was required to pay extra taxes—he had to be humiliated while he did so. 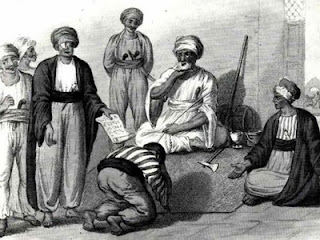 Although the jizyah was collected throughout this period, it is clear from the passage that other provisions of the Ordinance of Omar weren’t enforced prior to the incident in the marketplace. But the passage also shows that Jews and Christians lived under the threat of them being reimposed at any time—and that it was burdensome enough to drive some prominent Jews and Christians to turn their backs on the faiths of their ancestors.

With all the rigmarole over Abu Shuja, ibn Samha kind of gets lost in the shuffle. Nevertheless, a near-contemporary historian does give us a couple subsequent mentions of him, including one final one: in his chronicle for the year 485 AH (1092-1093 AD), the year after the altercation in the marketplace, 'Abd ar-Rahman ibn al-Jawzi gives us a single sentence:

Shawwal 485 was the month after Nizam al-Mulk was brutally assassinated, and the same month ِthe sultan died under suspicious circumstances. That ibn Samha should have been killed at just that time can't be a coincidence. As for what I think happened to him, see The Thread of Reason.

Posted by Michael Isenberg at 10:18 AM

Email ThisBlogThis!Share to TwitterShare to FacebookShare to Pinterest
Labels: dhimmis, Islam, Islam in the Middle Ages, jizyah, The Jews in Islam