A Medieval Smackdown.
by Michael Isenberg.

More of the real-life history behind The Thread of Reason.
CONTAINS SPOILERS.

The Muslim world of the 11th century—when my novel The Thread of Reason takes place—was a divided world.

On the one side were the moderates: they patronized the sciences, treated Jews and Christians with tolerance, and were willing to wink at wine drinking and other occasional breaches of Muslim law, the shari’ah.

On the other side were the hardliners; they were skeptical of the sciences, attempted to persecute Jews and Christians, and sought strict enforcement of the shari’ah.

In the political realm, this conflict was mirrored by the conflict between caliph and sultan.

The caliph—from the Arabic calapha, meaning to follow or succeed—was the successor to Muhammad. Ruling from his palace in Baghdad, the caliph was (since 750 AD), a member of the Abbasid Dynasty, descended from Muhammad’s Uncle Abbas. The caliph was the supreme authority in the Muslim world, the “Commander of the Faithful”. The sultan was merely his strong right arm, carrying out his policies and enforcing the shari'ah.

At least that was the theory.

In practice, the sultan had the army, and was therefore the real power.

During the latter half of the eleventh century, the sultans were Turks, members of the Seljuq Dynasty. Their propaganda presented them as the defenders of the caliph and of orthodox Islam. And yet, in many ways, they weren’t very good Muslims. They drank wine and wore silk, both prohibited in the shari’ah. As I’ve written previously, they had Jewish officials working for them, and when one of these officials came into conflict with a Muslim, and the caliph's government attempted to retaliate by decreeing strict enforcement of the restrictions on Jews and Christians that are in the shari'ah, the sultan Malik-shah and his vizier (prime minister), Nizam al-Mulk, stood by their own man, took the Jews’ side, and made the caliph back off from the hated decree. Indeed, Malik-shah and Nizam al-Mulk were in constant conflict with the caliphs, whom they tried to control by ensuring the caliph’s vizier was one of their own guys. At the time The Thread of Reason takes place, this office was filled by one of Nizam al-Mulk's own sons-in-law. For all these reasons, scholars have recently come to refer to the notion that the sultans were the defenders of orthodoxy as “The Great Seljuq Myth.”

It was inevitable that such a conflict would come to a head. By the fall of 1092, Malik-shah was determined to have it out with the caliph. 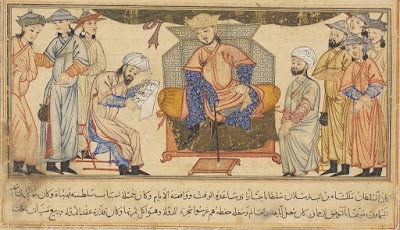 Nizam al-Mulk apparently opposed the plan, and blamed it on Shiite troublemakers who had infiltrated the government. According to Nizam al-Mulk’s guide to government, The Book of Politics,

Despite the opposition of his vizier, Malik-shah was determined to proceed. In October of that year, he traveled from his capital in Isfahan up to Baghdad, his third such visit. Along the way, Nizam al-Mulk was brutally assassinated, as I described in my previous post, “The Murder that Started it All.”

Free from the overbearing influence of his vizier, the sultan continued on to Baghdad. The historian ibn Khallikhan (d. 1282), tells us what happened next:

The death of the sultan Malik-shah, and the resulting deliverance of the caliph, was a victory for the forces of shari'ah over the forces of moderation, one from which the Muslim world would never recover. In another paragraph, ibn Khallikan fills in the details about the sultan's death, so convenient for the caliph:

Even in an age where accidental death was common, it defies imagination that the death of Malik-shah, coming so closely on the heels of the assassination of Nizam al-Mulk, and right after he had told the caliph to get out of town, would be due to eating a bad antelope. For what I think really happened, see The Thread of Reason.

Posted by Michael Isenberg at 9:54 AM