And Serve it with Mustard, God Willing

The Joy of Cooking—Tenth Century Style.

One of the things that struck me during my research into the medieval Muslim world is the many ways in which that society, though separated from ours by a thousand years, is nonetheless familiar. And one of the most significant areas of similarity is food. Food was not merely a means of subsistence in the apartments, houses, and palaces of tenth century Islam. It was cuisine. An art form where as much craftsmanship went into the presentation as into the spices. There were multi-course feasts, food fads, take-out meals, celebrity chefs, utensils given as wedding gifts, advice about diet and health, guides to table manners—and cookbooks. 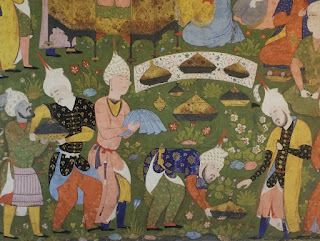 One such cookbook that has come down to us went by the rather ponderous title The Book of Cookery: Preparing Salubrious Foods and Delectable Dishes Extracted from Medical Books and Told by Proficient Cooks and the Wise, written by one Abu Muhammad al-Muzaffar ibn Nasr al-Warraq. It was translated into English by Nawal Nasrallah, and published in 2007 as Annals of the Caliphs’ Kitchens.

The Book of Cookery is a veritable encyclopedia of food, comparable to the comprehensive kitchen bibles like The Joy of Cooking or the Better Homes and Gardens Cookbook that we all relied on before the Internet came along, and some of us still do. In addition to recipes, there are stories and poems—all about food of course. In God’s Banquet: Food in Classical Arabic Literature, Geert van Gelder calls the poems “the equivalent of the luscious color photographs of modern cookery-books.” The book therefore gives us an invaluable slice of life in the medieval Muslim world, which I'd like to share with you. It's a slice not to be found in the historical chronicles, which, to paraphrase Jean-Henri Fabre, are too busy recording the names of all the royal bastards to bother with a recipe for wheat.

There are plenty recipes for wheat to be found in the Book of Cookery. Harissa, a porridge of grains and shredded meat was a particular favorite (and obviously something different than the North African chili paste we associate with the term today). But porridge is just the beginning. There are stews, roasts, omelets, puddings, kebabs, sausages, trail mixes, sweet syrups for beverages, tapas-like small plates to enjoy with wine, desserts very much like modern baklava, and meat-filled pastries of the sort that every culture on the planet thinks makes its own cuisine unique and special (and which was also called harissa in some places).

The book begins with a complete guide to food and health, based on the ancient Greek theory of the four humors: blood, phlegm, green bile, and black bile. According to this theory, illness was the result of the humors getting out of balance, and the cure was to eat foods with opposite properties of temperature and moisture in order to compensate. Green bile, for instance, was thought to be hot and dry and therefore an excess of it caused fevers. Thus, to cure fever, it needed to be balanced by foods that were cool and moist. Gourds and pomegranates feature prominently.

Still, not all the cures are quite so, well, medieval. I'm sure this recipe for homemade cough drops was every bit as effective as Robitussin AC (the one with codeine in it):

The final chapters contain a lengthy guide to table etiquette. Contrary to what you may have seen from stereotyped Arabs in mid-twentieth century movies, belching at the table was not considered good manners.

Virtually nothing is known about al-Warraq himself, but we nevertheless have a few clues as to how The Book of Cookery came about. In Arabic, “warraq” means paper. Thus, he would have been in the publishing business. He wrote in the book’s preface, “You asked of me, may God bestow longevity upon you, to write a book on dishes cooked for kings, caliphs, lords, and dignitaries, and here it is, may God bestow longevity upon you, an illustrious and fine collection.” Clearly some anonymous person, who was particularly interested in the cuisine of the royal palaces, had commissioned this work. From there we can speculate as to why. Just like us, the people of the tenth century were fascinated by the lifestyles of the rich and famous. The nouveau riche and the upper middle classes not only wanted to know what their rulers ate—they wanted to be able to duplicate the dishes in their own kitchens (more about that later).

Indeed the rulers took dining seriously. The translator explains that mastering a few dishes was an essential part of the courtier’s art, and a few rulers held cooking contests or were even cooks themselves. Harun ar-Rashid was perhaps the most famous of the caliphs, thanks to the accounts in the The Thousand and One Nights of his nocturnal, incognito prowls about Baghdad. I’ve written previously about his fondness for drinking parties. Apparently he was equally fond of food; he used to beat the cooks if meals weren't to his satisfaction. But his half-brother, Ibrahim, was the real gourmet in the family—an accomplished chef in his own right, and author of a widely read cookbook. It was smart, too. In an era when the brothers of the caliph often spent their lives chained up, because of the threat they posed as potential claimants the throne, a brother who had no apparent interests other than gracious living (Ibrahim's other passions were poetry and music) would be viewed as no threat at all. Al-Warraq apparently had access to his cookbook; some of the recipes and poems are included in The Book of Cookery.

Ibrahim figures in a story that illustrates both how lavish the royal table could be, as well as the rewards that were showered on the top chefs. He had a slave named Bid’a, who “was an exceptionally skillful cook and was the most-gifted expert in making cold dishes and desserts. She was the best, ever.”

During the reign of al-Amin, son of Harun ar-Rashid (so Ibrahim’s nephew), the caliph, hearing what an excellent cook Bid’a was, asked Ibrahim to have her make him some sikbaj—beef stewed in vinegar with eggplant, carrots, and onion, and seasoned with salt, cilantro, coriander, and saffron. And although that may sound like a rather homespun meal to serve in a palace, it’s clear from the recipe—which is included in The Book of Cookery—that it is much fancier than it sounds. In addition to chunks of beef and kid, there are thirteen whole chickens, an entire lamb, and as many quails and sparrows as fit in the pot. The recipe gives very detailed instructions for the presentation:

The finished dish, we are told,

All that food for four people. I imagine there must have been some leftovers.

In any case, al-Amin was so delighted that he showered his uncle with gifts: “three cases of top quality perfumes, three boats that belonged to [Harun ar-]Rashid, and three bags of money.” Sadly Bid’a, who had done all the work after all, was not quite so well rewarded in that slaveholding society. Still, she was not forgotten. The caliph gave her a necklace that was worth 30,000 silver dirhems. To put that in perspective, it would take a skilled craftsman about fifteen years to earn that much.

A spectacular meal, to be sure. And yet, the cuisine of the caliphs’ kitchens wasn’t that far removed from the food that graced the tables of the middle classes. They ate sikbaj as well. But, as the following anecdote shows, they were definitely interested in how it was done in the palaces. And, as you’ll see, they discovered one important difference:

Posted by Michael Isenberg at 5:06 AM