The End of Science

After [Ghazali], and despite Averroës, philosophy hid itself in the remote corners of the Moslem world; the pursuit of science waned; and the mind of Islam more and more buried itself in the Hadith and the Koran.
— Will Durant, The Age of Faith1

That one sentence had a greater effect on me than any I ever read. The notion that ideas, in this case the ideas of the Muslim theologian Abu Hamid Ghazali (d. 1111), could so radically change the course of a civilization was fascinating; I had to delve into it more deeply. The project ended up turning into years of research and has resulted in a published book, The Thread of Reason, which I intend to be the first in a series that will tell the story of how Ghazali undermined the study of science in the Muslim world, and thereby doomed Islam to nine hundred years of technological stagnation.

Contrary to what some of my right-of-center friends think, there really was a Golden Age of Muslim science, which boasted achievements in numerous fields of study—mathematics, chemistry, astronomy, optics, medicine—not to mention a cast of colorful characters who made them possible—Rhazes, Avicenna, Biruni, ibn Haytham, and Omar Khayyam, among others. But I’ve written about that previously, and what I want to cover today is why the Golden Age sputtered out by the year 1100. What happened? 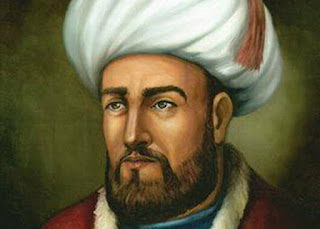 The standard answer, especially among 19th and early 20th century Orientalists, is that Abu Hamid Ghazali happened. Ghazali was a brilliant scholar of shari’ah, so much so that he was entrusted with the leadership of Sunni Islam’s flagship university, the Baghdad Nizamiyya, at the tender age of thirty-three. Known for his combative personality (he was pretty much a dick) and spectacular memory (he was said to have memorized thousands of hadith), he wrote a book, probably in the early 1090s, called The Incoherence of the Philosophers. And by “Philosophers,” he meant scientists—philosophy and science were one profession during the Middle Ages and medieval writers used the terms interchangeably (as will I). In the Incoherence, Ghazali attacks nothing less than the signature enterprise of Western Civilization: the endeavor to understand and control the physical universe through the use of reason.

Influenced by the earlier anti-rationalist, Abu’l-Hasan al-Ashʿari (d. 936), the gist of the Incoherence is that science is not heresy per se, it’s just not very useful. It can’t prove the great truths of the Muslim religion: that Allah is One, that Muhammad is his Messenger, that the universe had a beginning, and that it will have an end. It’s a low key approach which makes Ghazali sound eminently reasonable—while he puts forward a radical proposition. It is only in the final chapters that he goes so far as to label any scientific concepts as heretical and deserving of the death penalty. Granted, one of them is the notion of cause and effect, the very foundation of science.

In researching the book, Ghazali took the trouble to actually learn science—not only is it obvious from the text that he’s well-informed about his subject, but we have an account of him taking science lessons from his on-again off-again friend Omar Khayyam. This enables him to systematically lay out the fundamentals of 11th century cosmology point by point and refute them. Like Kant, he turns reason against itself in order to rescue faith from the onslaught of science.

Ghazali accompanies these arguments with a ready arsenal of barbed insults aimed at those who disagree with him—they’re “dimwits,” stumbling over their own tails, carried away by their own cleverness. The combination of careful argument and entertaining invective is devastating.

The Incoherence was so influential that within a few generations, the Golden Age of Muslim Science had come to a definite end. When the scholar ‘Abd’ul-Latif al-Baghdadi visited Cairo in 1191, he complained that, although he encountered a vibrant intellectual life, it was all shari'ah and poetry. In a city of hundreds of thousands, which had once been a great center of scientific inquiry, he could only find two philosophers—one of whom, Maimonides, wasn’t even Muslim.2

The following year, one of Maimonides’ students, Rabbi Joseph ben Judah (to whom Maimonides dedicated The Guide for the Perplexed) witnessed an actual book burning. Rabbi Judah recounted to his friend, the historian al-Qifti, what he saw:

The Muslim world turned its back on science just as Europe was discovering it—ironically thanks to Latin translations of ancient Greek texts that had come to them by way of Muslim hands. As late as the fifteenth century, the gap in scientific achievement between the two civilizations was hardly noticeable. But in 1798, Napoleon and the French army conquered Egypt with considerable ease; there was little opposition capable of withstanding the firepower of modern French weaponry. The technological chasm between Islam and the West could no longer be ignored.

So that’s the standard narrative. But is it true?

Well, it’s complicated. Many scholars dispute that Ghazali was responsible for the downfall of science in the Muslim world. Some even deny that the downfall occurred at all. But alas, I’ve used my allotted space for today, so the complications, objections, and downfalls will have to wait for my next installment.

1Durant, Will, The Story of Civilization: 4. The Age of Faith, New York: Simon and Schuster (1950), p. 332. 2Kraemer, Joel L., Maimonides: The Life and World of One of Civilization’s Greatest Minds, Kindle Edition, New York: Doubleday (2008), Loc. 3880. 3Qifti, Ali ibn Yusuf al-, Tarih al-Hukama (History of the Scholars), Leipzig: Dieterich’sche Verlagsbuchhandlung (1903), Aug Müller, Julius Lippert, ed., p. 229. Translation mine. In Arabic, the excerpt from the imam's speech reads "Ad-dahiya ad-dahiya', wa an-nazila as-samma', wa al-musiba al-'amiya'" Note the cadence, the similar patterns of vowels in each phrase, and the two nearly identical words of the first phrase. This sort of wordplay was very common in the rhetoric of the time, and although I did the best I could to convey the spirit of it, it doesn't readily translate into English. 4Biruni, Abu Rayhan al-, The Chronology of Ancient Nations: an English Version of the Arabic Text of the Athar-ul-Bakiya of AlBiruni, London: William H. Allen & Co. (1879), C. Edward Sachau, tr., p. x.
Posted by Michael Isenberg at 4:16 AM