A Thousand Years of Aptitude

The title of S. Frederick Starr’s 2013 book, Lost Enlightenment: Central Asia’s Golden Age incorporates two controversial ideas: first, that Central Asia ever had a Golden Age, and second, that it was lost. Granted, these are controversial with two distinct group of people. More about that in a moment. 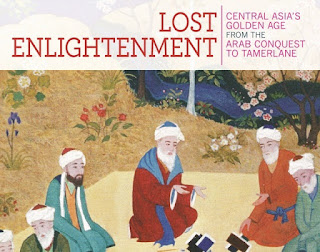 In his sprawling tour de force, Starr, the founding chairman of John Hopkins’s Central Asia-Caucasus Institute and Silk Road Studies Program, covers some thousand years of the history of Central Asia, a region roughly corresponding to modern Afghanistan, Turkmenistan, Uzbekistan, Kyrgyzstan, and eastern Iran (Khorasan). Starr argues that for the first five hundred years or so, starting with the time of the Muslim conquests (although the roots go back further), the region experienced a cultural flowering that led the world in astronomy, medicine, philosophy, poetry, architecture, craftsmanship, and a host of other fields. But around the year 1100, the Muslim world turned its back on the sciences, and Central Asia went into a long decline.

My Right-of-Center friends find controversy in the claim that there ever was a Golden Age in Central Asia or any other part of the Muslim world (For a discussion of whether there was a Golden Age in Muslim Spain, see my series Did the Islamic Golden Age in Spain really happen? A Debate). On this point, Starr presents abundant evidence that they’re wrong. We meet a colorful cast of thinkers, writers, builders, and experimenters. They were far too numerous to do justice to here, but a few names stand out, Renaissance men centuries before the European Renaissance.

Of course, first and foremost is my personal favorite, Omar Khayyam (1048-1131)—astronomer, mathematician, poet, scholar of shari'ah, and lover of wine. But since I’ve already written a few words about him elsewhere, I’ll use this space to talk about some of the other lamps of the Central Asian Enlightenment instead.

Muhammad ar-Razi (854-925), for example, known in the West as Rhazes. A dedicated physician, his influence extended far beyond the Muslim world—his book on measles and smallpox (he was the first ever to distinguish the two) saw forty European editions from 1475 to 1866. I previously shared an amusing story about his ingenious but risky cure for an emir’s arthritis.

Rhazes also indulged in some theological speculations, and my Right-of-Center friends will find some vindication in the fact that he wasn’t a very good Muslim in this department. The Quran, in a number of places (e.g. 11:13, 17:88), challenges anyone who is skeptical that it is really the word of Allah to write a book like it. Rhazes went on a tirade about that. “By God, what you say astonishes us! You are talking about a work which recounts ancient myths, and which at the same time is full of contradictions and does not contain any useful information or explanations. Then you say: ‘Produce something like it?’”

Then there was Abu Rayhan Biruni (973-1050), who during a less than stellar career as a diplomat managed to become the leading astronomer of his time. He invented specific gravity, wrote an encyclopedia of India, and calculated the circumference of the earth to within eleven miles of the modern value. Given its size, and that only two-fifths of it had been accounted for, he didn’t believe that all the rest could be ocean. He hypothesized that there must be another continent somewhere in the Western Hemisphere. Granted, Starr probably went too far in subtitling that discussion “Biruni Discovers America.”

At a time when most scientists believed that the earth was the immovable center of the universe, Biruni made considerable strides in developing a theory of a sun-centered solar system with a rotating earth. On that point, he engaged in a heated and occasionally insulting correspondence with the granddaddy of the Central Asian Enlightenment, Abu Ali ibn Sina (980-1037), better known in the West as Avicenna.

Avicenna spent his days as a physician and a government official, and his nights writing books and drinking wine (another not very good Muslim). His encyclopedic Canon of Medicine was the handbook of the physician’s art in both Europe and Asia for centuries. But his life wasn’t all bureaucracy and scholarship. He had declined the invitation of the thuggish Sultan Mahmud of Ghazna to join his court, and therefore had to spend some years on the lam, during which he had many narrow escapes.

While he kept his distance from Mahmud, Avicenna did accept the patronage of numerous other rulers. Indeed, all of these monster minds benefited from the generosity of sultans and viziers, who built glittering courts where they collected intellectuals and craftsmen the way squirrels collect nuts. They provided the instruments and books needed—some of their libraries stretched into the tens of thousands of volumes. Perhaps more important, they provided the company of like-minded people, to supply the back and forth that’s so crucial to scientific discovery.

If the Right is dubious that there was ever a Central Asian Enlightenment, the Left is dubious that it was ever “lost.” Indeed, some critics—Sonja Brentjes, for example, from the Max Planck Institute for the History of Sciences—drag out the tired old accusation that the claim is racist. Well, history is what it is, and it's not racist to establish the truth about it. Nevertheless, it is definitely much harder to establish the absence of something than its presence. Which is what Starr sets out to do in the last hundred pages or so of Lost Enlightenment.

The turning point, he argues (as have many others, including me), was the publication of The Incoherence of the Philosophers by the religious hardliner Abu Hamid Ghazali around 1095. In it, Ghazali argued that scientists and philosophers were at best useless—they couldn’t prove the great truths of the Muslim religion—and at worst heretical, deserving of execution. But then, how could it be otherwise? The whole scientific enterprise was based on the earlier ideas of Greeks and Indians—unbelievers in Islam.

Ghazali’s book was hugely influential. After it came out, kings still built glittering courts and stocked them with craftsmen, poets, and scholars of shari’ah (Muslim law). The buildings were more spectacular than ever. “No art surpasses architecture in its appeal to dictators.” But philosophers and scientists were noticeably absent. And when they did appear—the astronomers Nasir ad-Din Tusi and Ulugh Beg, for example—it just wasn’t the same. “Something important has been lost.” Starr hypothesizes it was the Greek and Indian ideas, the grains of sand that produced the pearls of culture, now anathema, thanks to Ghazali. Whatever the reason, the spark was gone. The Muslim world had so little interest in spreading new ideas that the first book printed by a Muslim using movable type would not be published until 300 years after Gutenberg.

I did have one criticism of Lost Enlightenment. I noticed several errors in Starr’s discussion of the Seljuq period (1037-1153)—the period with which I’m most familiar because of my own writing. They were minor in nature—names and dates that were incorrect—and never detracted from the main points. But still.

To his credit, in addition to laying out his arguments that the Central Asian Enlightenment became lost after flourishing for so many centuries, and the reasons that happened, Starr systematically addresses the arguments against his hypothesis. But in the end, he admits it’s not worth spending too much time on. “We feel little need to discover the cause of a nonagenarian’s death.” We can learn far more that it useful for own times by discovering how it lasted so long.

Posted by Michael Isenberg at 11:35 AM