How a 9th Century physician cured a king—by threatening him with a knife—and how he lived to tell about it. 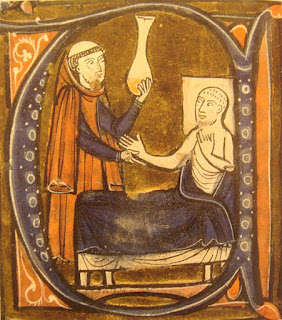 One of the greatest practitioners of medicine of the medieval Muslim world was Muhammad ibn Zakariyya ar-Razi (854-925). His fame and influence were as widespread in Christian lands as in Muslim ones—this illustration of him treating a patient is from a 13th Century Latin translation of one of his books. Such translations were the cornerstone of medical education in Europe for hundreds of years.

To list all of Muhammad ibn Zakariyya’s accomplishments would fill a week’s worth of blog posts. So I’m going to confine myself to just two of them: First, he was the first person in history to recognize that measles and smallpox were different diseases, each with their own symptoms and treatments. And second, although we tend to think of psychology as something that began with Sigmund Freud at the dawn of the 20th Century, Muhammad ibn Zakariyya famously employed a psychological cure to free the Amir Mansur of Bukhara of a case of arthritis that was so severe, the Amir could barely move:

Michael Isenberg writes about the Muslim world, medieval and modern. His forthcoming novel, The Thread of Reason, is a murder mystery that takes place in Baghdad in the year 1092 and depicts the battle for the Muslim soul between those who embrace science and tolerance, and those who would throw in their lot with mysticism and persecution instead.

Posted by Michael Isenberg at 12:46 PM